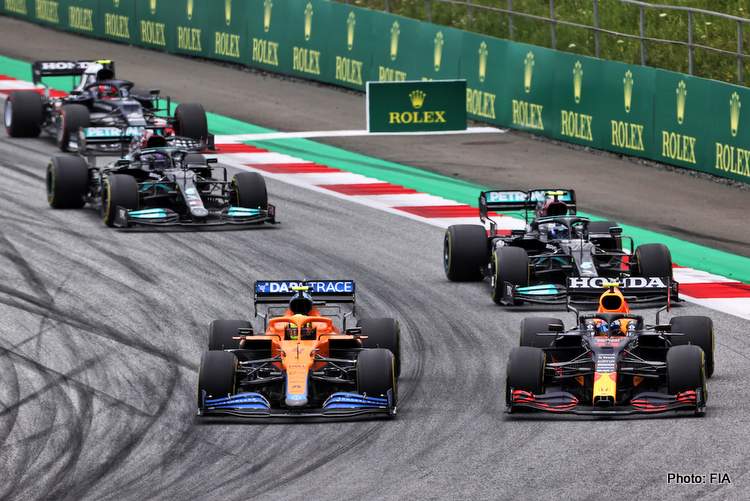 Formula 1 Race Director Michael Masi tossed the ‘Let Them Race‘ manual into the bin for the 2021 Austrian Grand Prix, as he and the FIA stewards wielded the whip during the race on Sunday

So much so that he has been compelled to write a lengthy explanation of the decisions made on the day, at Red Bull Ring, that almost spoilt an unspoilable race.

The rot set in after the safety car (to retrieve the stricken Alpine of Esteban Ocon) and the race resumed, on lap four, Verstappen leading by 1.3 seconds after blitzing the restart.

Norris next with Perez and the Mercedes duo snapping at his heels, side-by-side, all the way through to Turn 4, where the Red Bull driver, after edging ahead a few times while Norris stubbornly held on to the defensive line, decided to have a go around the outside.

That move never ever works at that tricky downhill turn, that flattens as it sweeps right, unless the driver on the inside, first to that crucial apex is compliant or much slower.

Neither was the case with Norris, fighting hard to retain second, as it was early days in the race. In the replay, it can be seen that, at first, Norris keeps it tight so Checo has space to tuck in behind the McLaren on the exit and keep the feisty Mercs in his rearview mirrors.

But the Mexican veteran was impatient and attacked at the no-grip, long way around and simply ran out of track. Lando called it a “stupid” move, which it was but more politely can be said rather that Perez should have known better and bided his time as he had a much better car than his rivals around him.

He went on to have a bad day at the office, in a race he was expected to finish in second, behind his rampant teammate, on home soil. Not a good day by Checo’s own admission.

But that first incident drew the whistle and card from the officials; Norris was contemptuous of the sanction, the McLaren driver scoffed when he heard it radioed to him while his team found an extra gear to ensure their driver celebrated on the podium.

Nevertheless, that penalty set the tone for the afternoon. With the orange dust settled over Spielberg, stats show that six drivers were affected by penalties, including one for Perez for doing the same thing to Charles Leclerc also at T4 while the Ferrari driver was also deemed to have been forced off by Perez at Turn 6 later in the race.

Had officials stuck to the spirit of ‘Let Them Race’ from the outset, the subsequent calls would have been avoided and not impacted the race as they did.

In a report on the official F1 website, Masi explained: “In Sergio’s case with Lando, he was wholly alongside Lando and therefore there is an onus to leave a car’s width to the edge of the track. And then the same in the reverse with Checo and Charles at the exit of Turn 4.

“And then Checo and Charles again at the exit of Turn 6, [the FIA stewards’] view was – and I don’t sit in the stewards’ room to deliberate – that in all three circumstances, a car’s width should have been left to the edge of the track because the two cars were alongside each other.”

Earlier, at the start Turn 1 was a free-for-all of track-limit infringements which prompted Alpine driver Fernando Alonso to call himself stupid for sticking to the rules while all around him broke them without consequences.

Masi continued: “We looked at it. One of the things we’ve said since Paul Ricard 2019 was that on the first lap and those first couple of corners… that the car needs to be back behind the car it entered the corner behind.

“We looked at the incident that Fernando was referring to and the angles that we could see at the time, and that was exactly what had occurred. All Lap 1 incidents are treated in a more lenient manner and that has been the case for a number of years, under the ‘Let Them Race’ principle, let’s call it.

“So that’s the general principle because particularly in circumstances like that, everyone has asked to look at things in a much [more lenient] way and then to help the drivers and the teams if they need to, and that was looked at at the time,” said Masi.

Adding insult to the aftermath, Norris’ transgression earned him two penalty points on his licence, taking his tally to ten points, two away from an automatic one-race ban. Tough to swallow as most pundits, former drivers and fans saw it as a racing incident.

Masi added: “To be fair, it’s a penalty point system that exists, it’s been there all the way through, no different to [drivers] driving on the road in countries that have a maximum number of points they have to abide by, and they have to adjust their driving style accordingly.

“So no, I don’t think they are harsh. It was discussed late last year… and the consensus was at the end of last year involving everyone, the teams, the FIA, everyone, that there shouldn’t be a change this year and it’s not something we’d ever change mid-year.

“The penalty scale is something the teams all agree upon and actually have input on at the start of the year is what the stewards use,” concluded Masi.

When rule-makers or referees (in any sport) have to explain dubious decisions made, with over 2,000 words, as Masi has above. You know he knows he and his crew of stewards – including Derek Warwick -may have got it wrong on the day, from that first call.

Next time a simple “We got it wrong” from the F1 Race Director would have been more palpable because on Sunday Masi and his stewards did not adhere to the tune of Let Them Race, we all saw that.