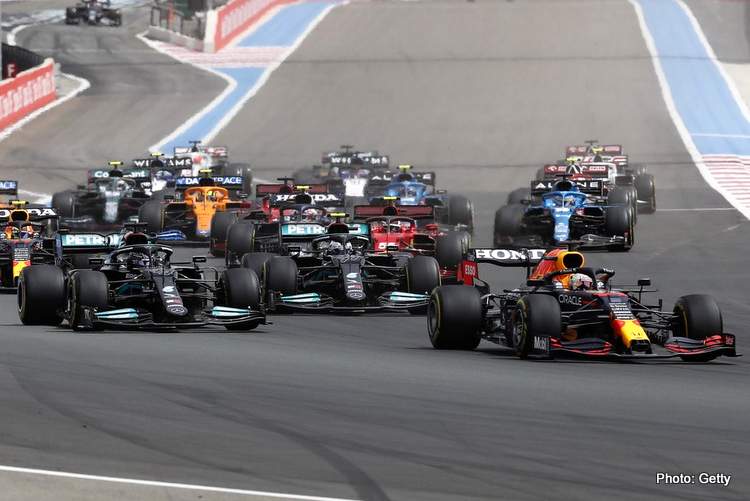 Miniscule errors were on full amplification as Max Verstappen and Lewis Hamilton fully committed to opposite strategies in an absolutely thrilling French Grand Prix.

Let’s crunch the numbers and see what really went on in Le Castellet.

Below I have assembled “Best Case Race Pace” for the French GP. I have extracted the best lap of each driver for laps between 1-5, 6-10, 11-15…….46-53. I have then averaged those times into one single time to compare the delta between the drivers ultimately representing each driver’s race pace lap time relationship. 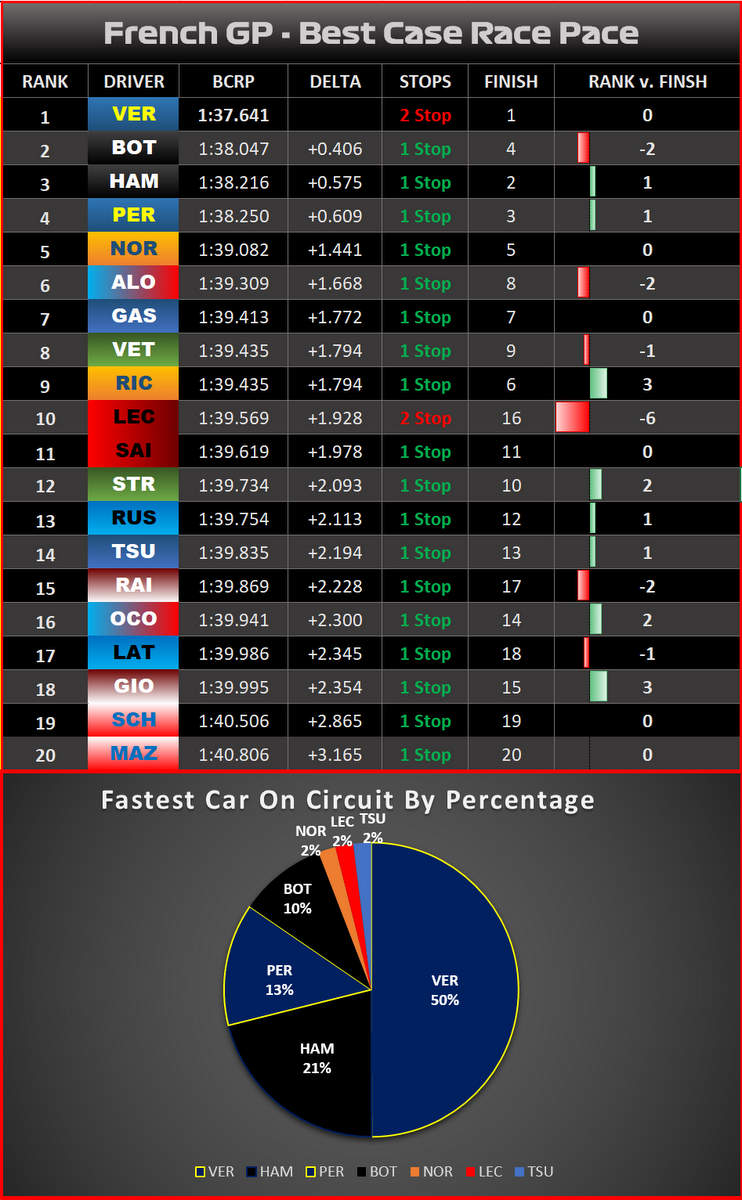 Max Verstappen dominated the numbers today, and a massive congratulations to him today for making the difference.

Per the chart above, Max Verstappen was the quickest car today on average, as a result of moving to a two stop strategy. For Max the average was artificially tilted in his favour as the fastest car on circuit 50% of the race. Lewis looked stronger on the hard tire in the second phase of the race, moving to a two-stop proved to be the correct strategy for the Red Bull team.

Valtteri Bottas had an erratic race with no consistency shown in his lap times at any time in the race. Breaking down the race into 10 individual segments and extracting the fastest lap, Bottas was fastest 5 times compared to Hamilton and resulted in Bottas being shown faster than Hamilton.

In the last ten laps of the race alone, Bottas regularly bounced around between 1:37’s to 1:39’s and that’s ignoring the 1:41 lap time he ran on the lap he was passed by Perez.

Alternatively, the average delta between Hamilton and Bottas when every lap is incorporated in determining an average was three tenths, which is maybe on the extreme high side.

Just as in qualifying, Perez was significantly off the pace to the top three unable to hang on to the lead battle in the early phase of the race.

Getting down and dirty on extreme race pace has not been one of the Mexicans strengths in the last handful of seasons so it wasn’t a surprise to see Perez run long on the first stint.

Much credit to Perez for catching and passing Bottas for the final podium position, as podium results are becoming a fitting look for Red Bull’s number two driver.

The result is best shown in the chart below, there was absolutely no consistency between the four best today, it’s peculiar to say the least. 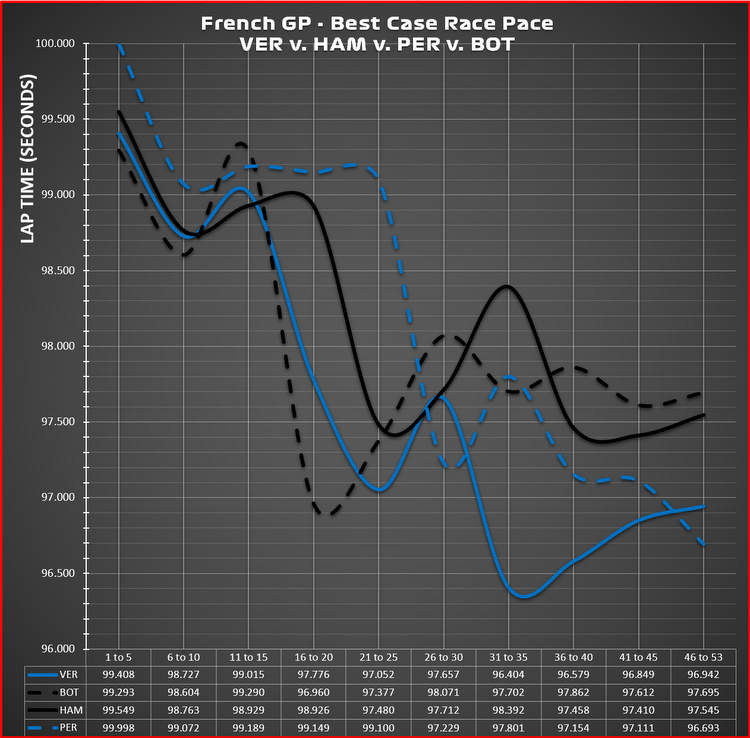 After four races of Ferrari catching McLaren in tiny steps and looking to continue that streak as McLaren qualified worse than Ferrari on Saturday, Ferrari delivered an alarmingly poor result just as McLaren delivered a one-two best of the rest result.

McLaren jumped ahead of Ferrari from a two-point deficit to a six-point lead. Lando Norris also continues to lead Valtteri Bottas in the championship with another top-five finish in France.

Fernando Alonso, Daniel Ricciardo, Sebastian Vettel, and Pierre Gasly were separated by about a tenth per lap in a one heck of a midfield battle that was won by a slightly quicker Norris.

It’s noteworthy that Gasly finished ahead of Alonso despite showing less pace as AlphaTauri end up maintaining their lead on their closest rivals Aston Martin in the constructors’ championship. Alpine, unfortunately, continue to lag significantly behind as it seems one of their drivers struggled on race day.

The remaining nine drivers including the Ferrari duo but excluding the Haas duo were separated by approximately three tenths. It doesn’t take missing by a lot to miss by a lot in the midfield’s closely contested battle as shown with Ferrari’s result.

Alfa Romeo continue as the leader of the bottom three teams by two points without anyone scoring a point today. A sure highlight for Williams was George Russell delivered the fifth-fastest in-lap/out-lap combined time during the first pit stop cycle which is astounding, it’s the Easter egg of the race. 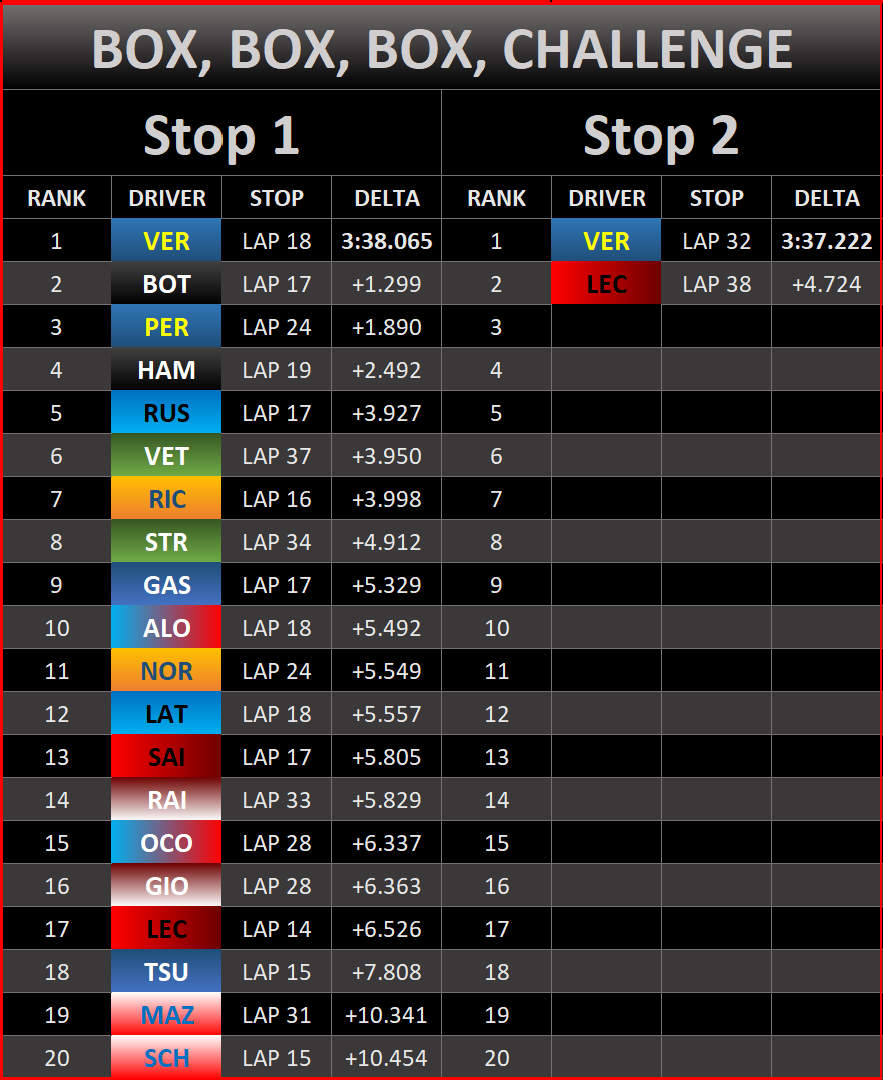 “But Toto, it was such an early stage still to switch from the medium to the hard tyre. Wasn’t it a bit too greedy also that you were focusing on Valtteri trying to get him past Verstappen too, and thereby putting unnecessary risk on Lewis?”

So what really happened? Many mistakes, many. Verstappen gets an error for his Turn 1 mistake. Mercedes and Hamilton are solely responsible for once again fumbling the race for the exact same reasons they did in Baku.

Not only did Verstappen deliver a faster in-lap than Hamilton, while Red Bull provided faster service than Mercedes on pit lane and Verstappen delivered the only sub 1:40 out-lap of the field with a 1:39.966. For reference, Kimi Raikkonen and Valtteri Bottas where the only other drivers to go sub 1:41 on their out-lap with everyone else north in lap times from there.

The combined In-lap and out-lap by Hamilton was 2.5 seconds slower than Verstappen. It’s enough to make your head spin. How is this even possible? and why Mercedes decided to wait for Verstappen to pit before pitting Hamilton is perplexing as well.

Every mistake up until Lap 32 were reset to zero when Red Bull decided to pit Verstappen a second time, or so it seemed. Mercedes were convinced that staying on a one-stop strategy was the way to go while Red Bull decided a two-stop was their only way forward. It made for a fascinating battle.

In a season where every detail matters as stated by Rosberg, Valtteri Bottas is credited with his correct assessment that a two-stop was the best way forward. The missing piece of the puzzle as to why Mercedes stopped Bottas so early at the first cycle and why Mercedes handled it so poorly was answered in Toto’s reply to his question above in response to Rosberg.

Mercedes had no choice but to pit Bottas due to his lock up and subsequent flat spot that was sending concerning vibrations through the suspension. Toto acknowledged that pitting Bottas would trigger the first pit cycle as a result.

Despite correctly predicting the ideal strategy, ultimately it was an error from Bottas which changed the complexion of the race from a strategical perspective. It resulted in all three leaders needing to go much further in the second stint than originally planned. The only reason a two-stop window opened was due to the Finn’s mistake in the first place, and Mercedes erroneously refused to change their plight.

Desperately needed are stronger pit in-laps from Hamilton during the race as they’ve been notably slower than those of Verstappen, and Mercedes urgently needs to figure out how to service their cars faster on pit lane than they currently do, it’s as if Monaco cursed them. Bottas on the other hand needs to score more points and more often.

Red Bull found a way to steal this one away from Mercedes just as it looked that they would end up in trouble. It’ a Perfect 10 from Verstappen and Red Bull. 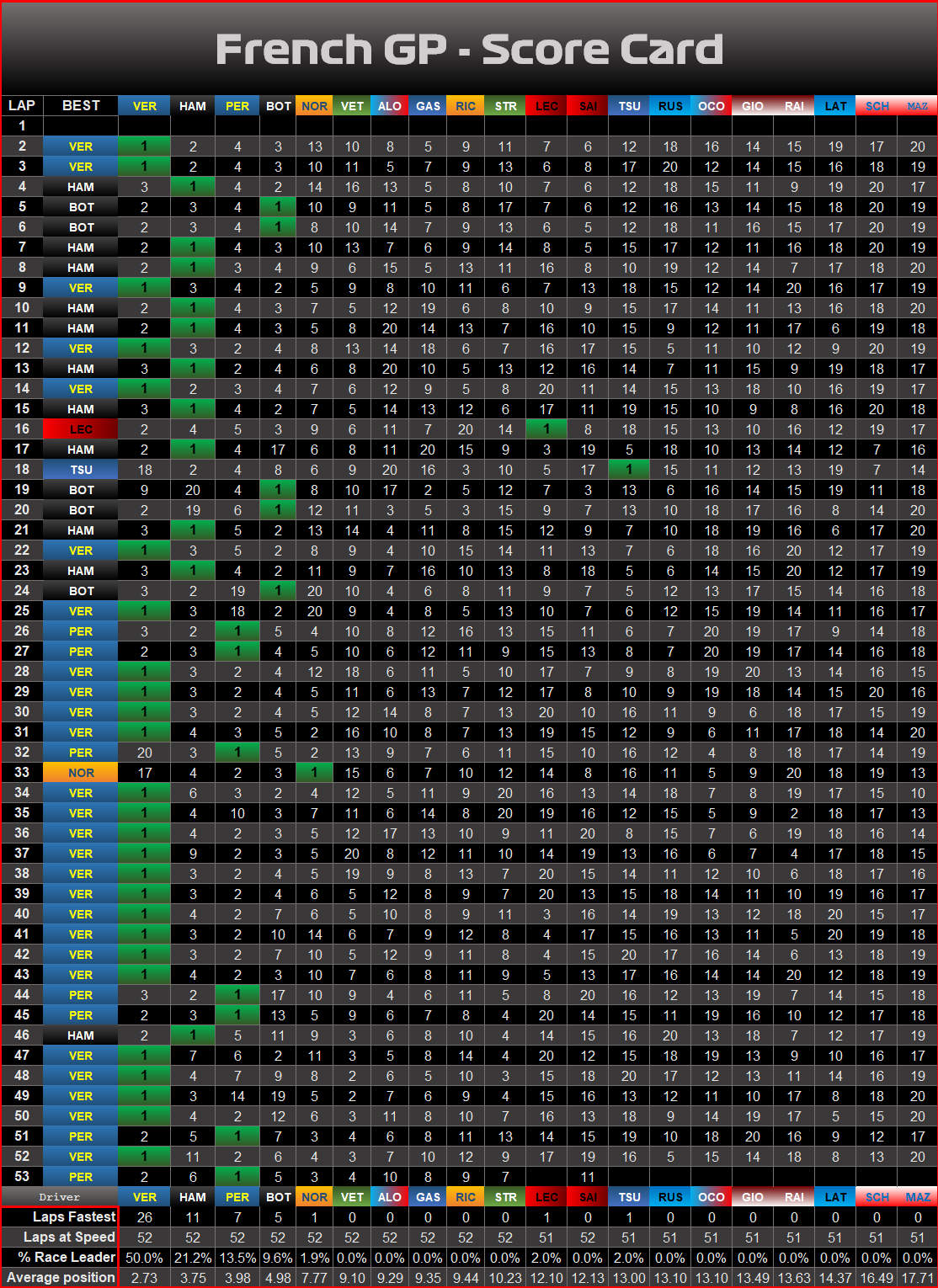