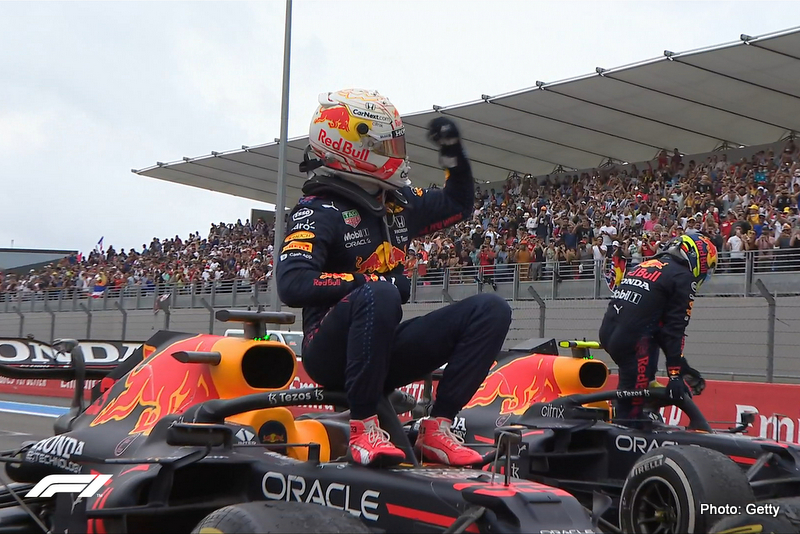 Max Verstappen sealed an epic comeback victory at the French Grand Prix, reeling in leader Lewis Hamilton and passing him with two laps to go.

While Hamilton tried to make an old set of hard tyres last until the end, Verstappen and Red Bull gambled on a two-stop strategy and came up trumps, almost an exact role reversal of the Spanish Grand Prix earlier this year that Hamilton won.

Sergio Perez finished third having passed Valtteri Bottas late on, although that move remains subject to an investigation by race control.

Bottas was frustrated over the radio having asked for Mercedes to go for the two-stopper, with the team’s strategists likely to face criticism for their role in this win for Red Bull.

Lando Norris had a great drive to finish fifth, with teammate Daniel Ricciardo just behind in sixth, a fantastic race for McLaren as they continue their battle with Ferrari for best of the rest.

Pierre Gasly had a solid P7 at his home race, with Fernando Alonso eighth and Aston Martin duo Sebastian Vettel and Lance Stroll ninth and 10th.

What a move that was by the championship leader on the penultimate lap to regain P1 from Lewis Hamilton!#FrenchGP 🇫🇷 #F1 pic.twitter.com/IBH2gVhsMY

Verstappen started the race poorly, ceding the lead to Hamilton on the opening lap after missing his braking point into Turn 2, and then had to be patient during the first stint.

Bottas was a presence too in P3, and it was the Finn who Mercedes pitted first in an attempt to undercut Verstappen.

The Dutchman covered it off, with Mercedes leaving Hamilton out for a crucial extra lap, a decision that proved costly as Verstappen was able to undercut the seven-time champion to grab back the initiative.

Perez was left out longer in the race lead, with Hamilton and Bottas stalking Verstappen.

With passing difficult and Red Bull having less wing on their car, the Mercedes duo could not make a move count and began to drop back, only for Verstappen to pit onto the medium tyres.

That left the 23-year-old with 20 laps to catch and pass Hamilton and Bottas, a task he was up to, overtaking his title rival with just one and a half laps to go.

Speaking at the chequered flag, the delighted Dutchman said: “At the beginning it was super difficult out there with the wind so one lap we had an okay balance, then the next lap you were sliding everywhere.

“When we made the first pit stop then you could as they were pushing me on the hard tyres behind but then when we made the call to do the two stopper, luckily in the end it paid off. We had to work hard for it, but very rewarding.”

Mercedes chief strategist James Vowles told Hamilton that the team were to blame for a poor pit stop strategy and the 36-year-old said afterwards that they needed to improve in order to compete.

“Congratulations to Max, he did a great job,” he said.

“They just had the better strength all weekend. Considering we had such a difficult Friday, I’m really happy with today’s result. Of course we didn’t win and we were in the lead but I had no tyres left at the end and unfortunately lost the position. But still a good race.

“We’ve got to find some pace, that’s for sure. You have seen most of the time we lost today was on the straights. So we’ve got to dig deep, figure out where that is, whether it’s power or drag.

“We’ve still got a good package. I’m not really sure how we lost position today [at the first stop]. We didn’t know how strong that was going be or not [the undercut]. Obviously they had a good strategy and it worked really well for them.”

Perez built on his Baku win with another podium and was happy with his efforts at Paul Ricard: “It was important to stay within the leaders. The first five-10 laps, the car was pretty undriveable with the wind.

“We were running less downforce today, so it was hard to keep up but then the track was getting better and I started to pick up and we managed to go quite long in the end, so I think that paid off.

“We did a great race and a great strategy from the team. I’m happy that [Verstappen] won the race today and good points for the team.”

The win sees Verstappen extend his advantage at the top of the drivers’ championship to 12 points with a double-header in Austria next up on the calendar.

While McLaren will be delighted with P5 and P6, it was a nightmare race for Ferrari whose drivers both finished outside the points after struggling to manage their tyres throughout.

George Russell was impressive for Williams in 12th, while Yuki Tsunoda finished 13th having started in the pit lane.

Esteban Ocon had to settle for 14th at his home race, with Antonio Giovinazzi and Kimi Raikkonen 15th and 17th respectively for Alfa Romeo.

Nicholas Latifi was 18th, with Haas duo Mick Schumacher and Nikita Mazepin 19th and 20th in a race where all 20 drivers finished. 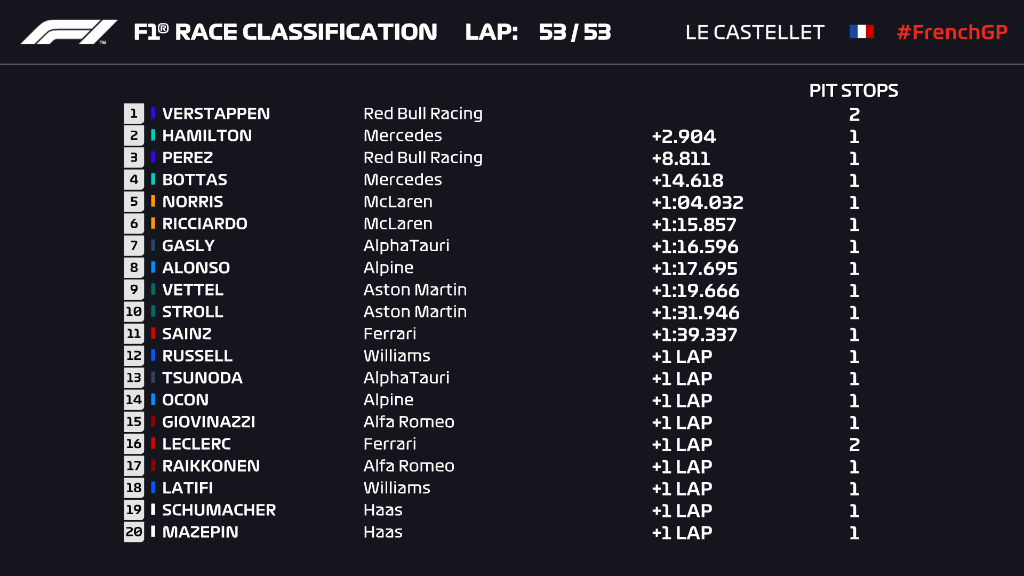 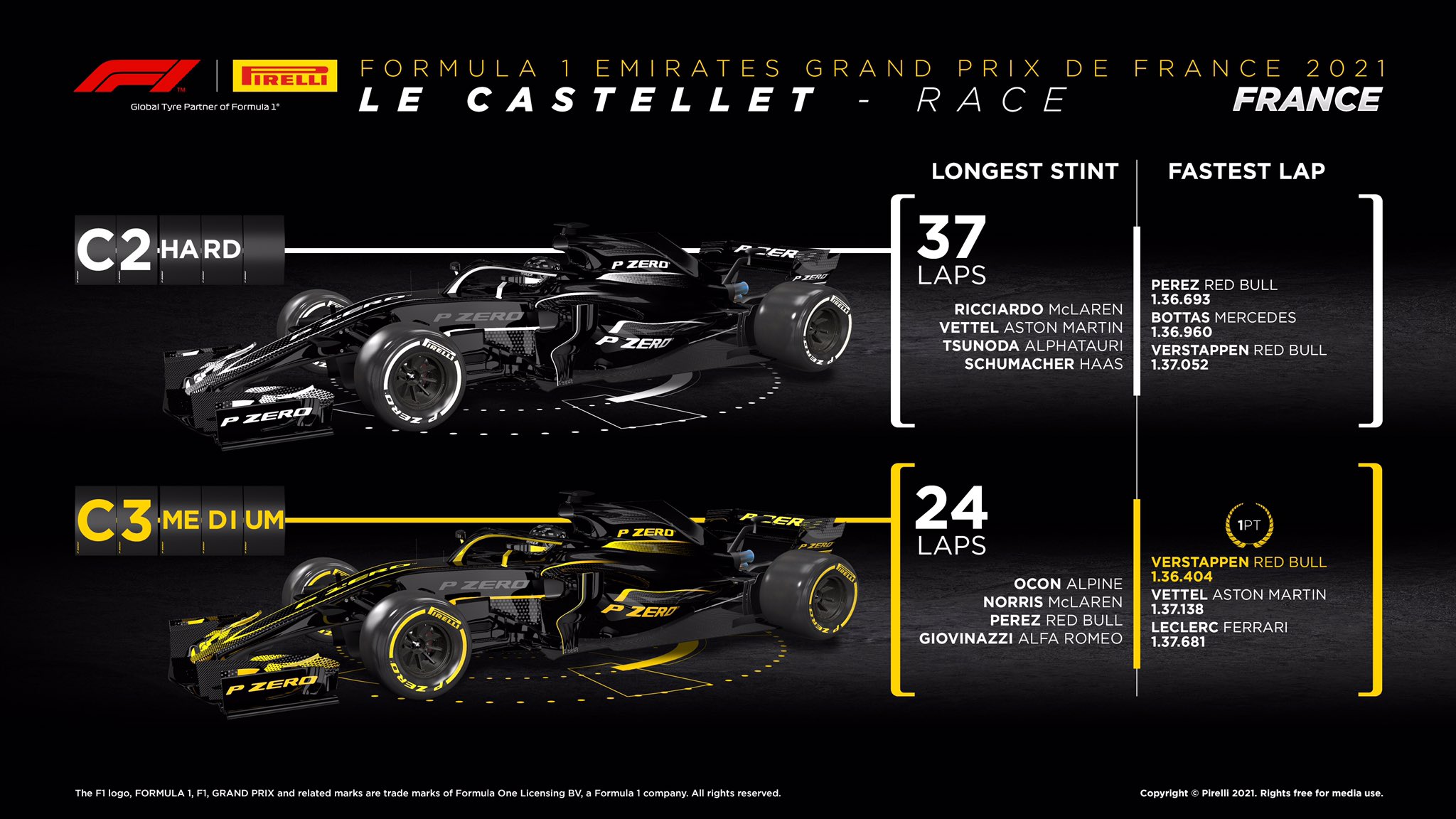 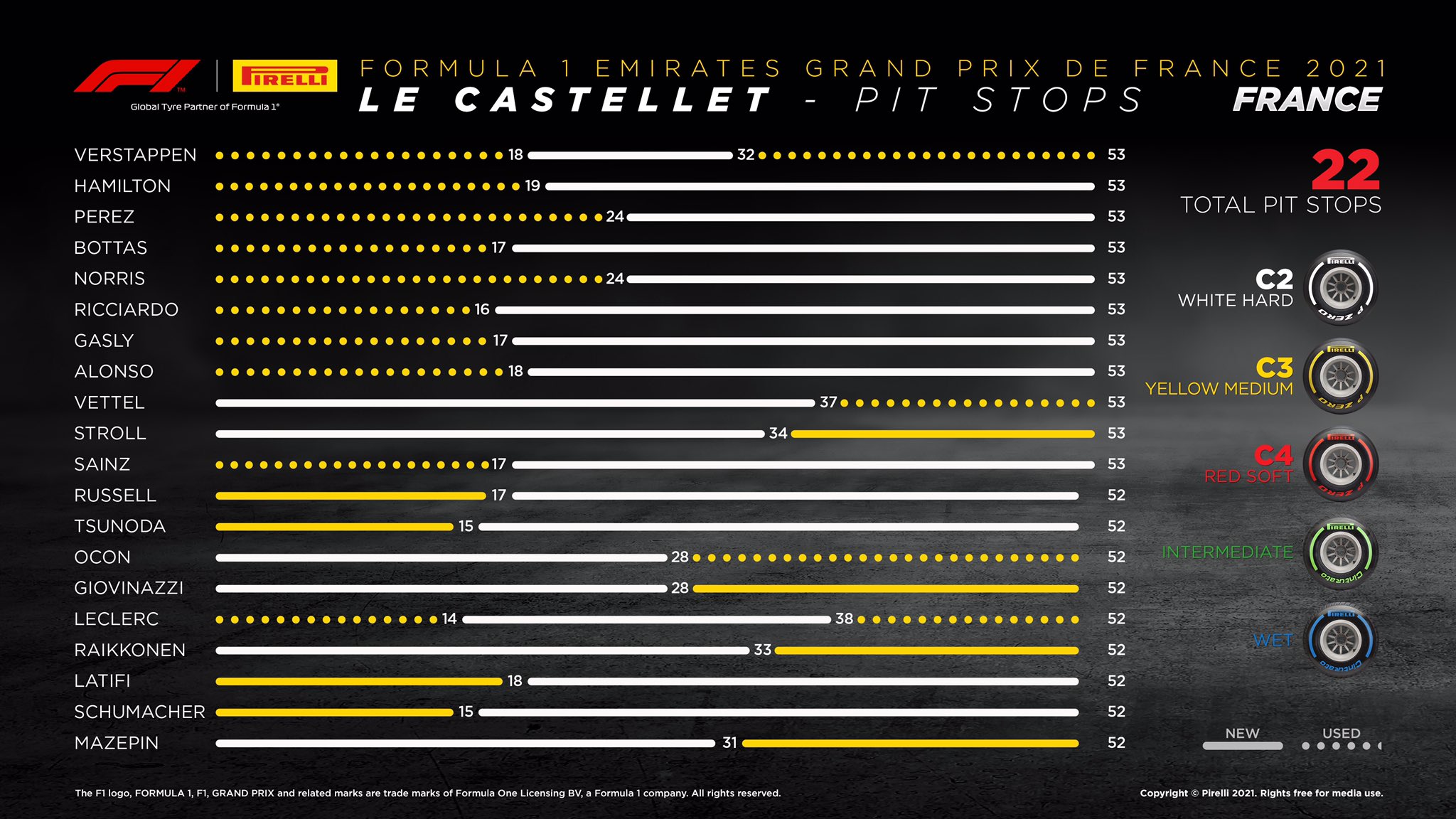