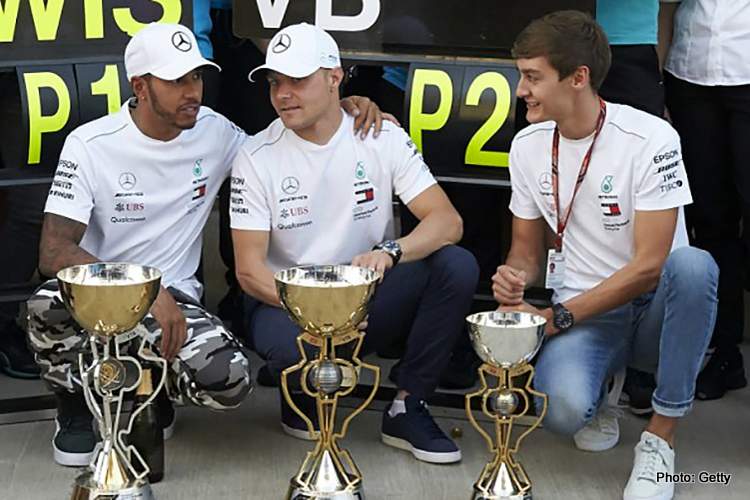 German website F1 Insider is reporting that George Russell will replace Valtteri Bottas at Mercedes from next year, claiming that team boss Toto Wolff has informed the Englishman’s management that the deal is done and the Finn will return to the team that gave him his break.

Bottas is enduring arguably his worst Formula 1 season since he joined the World Champions in 2017, his form taking an alarming dip in recent races where, as keen observers have noted, he has driven like a man who may well know his future will not be with Mercedes beyond this year.

While Brtish media are lobbying resolutely for Russell to partner Lewis Hamilton starting 2022, this report appears to have confirmed that their wish will be granted for one of the hottest prospects of the new generation of F1 drivers.

Charming and popular, Russell has been stellar since he burst on the scene, even Fernando Alonso only has good things to say about a driver the Spaniard predicts is “a future World Champion” and added: “I said last year when I was following the sport that George had been very, very impressive with the performances we saw in the Williams.

“We know that it is not a competitive package. It is better this year but he was putting in something special every weekend and that was nice to watch from home. That is something that always impresses me,” explained Alonso.

Referring to the weekend in Bahrain in which, within a few hours in the Mercedes, Russell was on Valtteri Bottas’ pace and might have won that night had the team not failed him.

Alonso said of the occasion: “The opportunity with the Mercedes… I think it was a real opportunity for everyone to watch what a driver with the talent of George can do with a winning car.

“He nearly won the first race at the first opportunity he had. That, I think, was proof for many people, not only a few, that we knew how good he was; that race in Bahrain was enough to open [the eyes] of millions of people,” explained the double F1 World Champion.

Earlier, before the recent F1 Insider report was published, Bottas told media: “I think we’ll start contract talks next month. I certainly still have a few good years in which I can develop myself further and just get better. I’m still young enough, even if of course you can’t know what the future holds for you.”

Rivals Red Bull expect Mercedes to promote Russell, with Helmut Marko telling Sky Deutschland: “It would be the logical step. They can’t hold off any longer. Otherwise, the funding no longer makes sense. Even if Hamilton won’t be happy.”

What of Bottas? “He need not call us. There is no space. Actually, I can only imagine a swap with Russell. I think Williams will be the only option for him.”

If the swap deal has been made, Bottas appeared unaware when he told reporters: “About my future, yes, the August break is normally a good deadline. But to be honest I don’t want to think about it yet. I just want to win races, that’s the only thing on my mind at the moment.”

Even if he does win races, which he should in the car that has done so in Hamilton’s hands, will it be enough to convince Mercedes that keeping him another year and keep Russell out?

Williams team boss Jost Capito was not revealing much when broaching the subject: “We would like to keep George but we all know that Mercedes will make that decision.”

Needless to say, nurtured by Mercedes and Wolff for this to happen, Russell is more than ready to step up but revealed little about his future to F1.com: “I’m just focused on the here and now really, but I’m sure everything will be sorted no later than the end of the summer break really.

“I think we’d all want a nice summer break off when the season’s this intense, not messing around with contracts! I know I certainly would anyway. And it gives everybody a bit of clarity… I guess we’ll see in the coming weeks,” added Russell.

In the end F1’s current puppetmaster, Wolff will make the call and, prior to this, was typically vague about the matter: “We don’t want to leave it until January to confirm the two drivers… also, to give the driver peace of mind, or be able to concentrate on the job

“Obviously for next year, there’s lots of balls in the air and we will always try to do the best for the team long-term, while also giving total loyalty to our current driver line-up.

“We are not doubting either Valtteri or Lewis, but discussions obviously are going to happen but not in January next year,” explained Wolff.

Nevertheless, the smart money is on Bottas being ditched, replaced by Russell at Mercedes for 2022 and beyond as the World Champions build for the future and prepare for the end of the Hamilton era.

And on current form, Bottas does deserve a wake-up call which a demotion to Williams might be the tonic he needs. Thereafter he can keep himself in play for a return to the team when Hamilton hangs up his helmet, because no matter who says what, the 31-year old Finn has been the best wingman any team could wish for.

23-year-old Russell for sure will not be going to be number two when he partners Hamilton at Mercedes in 2022, and thus will bring a totally different dynamic to the team as well as a potential management headache for Wolff that could make the Nico Rosberg v Lewis Hamilton seem like a family picnic.

Prediction for 2022: Lewis and George at Merc; Valterri joins Nicholas Latifi at Williams.