Verstappen: Perez did everything we could’ve wanted 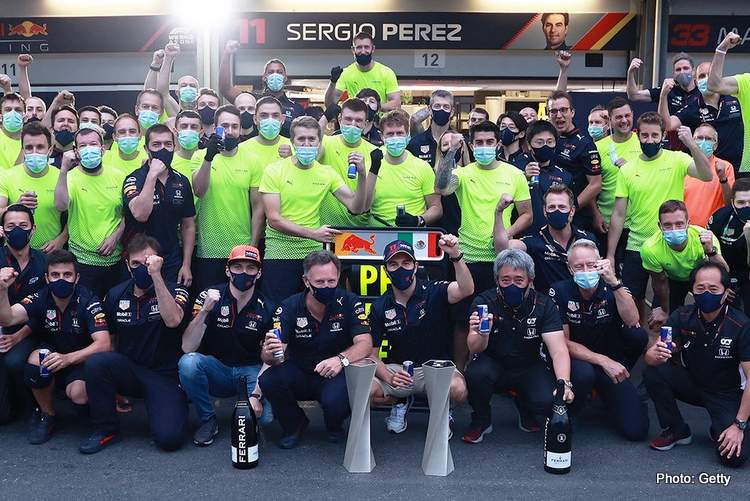 Despite losing out on a sure one-two at the 2021 Azerbaijan Grand Prix, Red Bull and Max Verstappen were delighted for Sergio Perez who took his first victory for the team in only his sixth race in Blue.

On a crazy Sunday in Baku, the Mexican veteran showed just why opting for his services, after ditching Alex Albon, was just the fizz Red Bull needed to raise their game from a one-man show to a proper double-pronged attack.

Other than Verstappen, the last time a Red Bull driver won a race was Daniel Ricciardo’s victory at the 2018 Monaco Grand Prix.

The win was a bonus, more importantly, for the Bulls, was how Perez played the game on the day. For most of the race, he was Verstappen’s perfect rear-gunner. The #11 car the buffer thwarting Lewis Hamilton’s attacks throughout the race. And a solid defence it was too.

Then, when misfortune struck Max in the lead, Checo was able to slot into the lead, take control at the restart to win a very important race for his CV and his team, who can celebrate the astute decision they nearly didn’t make to hire the Mexican veteran.

Obviously happy with his achievement, at the same time Perez was disappointed for Verstappen and said as much afterwards: “I feel very sorry for Max because he deserved the win and a 1-2 for the team would’ve been very enjoyable.”

After the race, and despite losing out through no fault of his own, Verstappen did Perez the honour of joining in the podium celebrations. He now knows he has a teammate to help him in the pursuit of his first F1 title and also a driver that will force him to raise his own game even more.

The Dutch driver said of Perez’s first victory for Red Bull: “Of course I am frustrated from my side not to win but I was very happy to see Checo up there. He did everything that the team could have wanted today.

“He had a great start and then we both got past Lewis in the pits. I heard he had to defend for most of the race, so if I couldn’t win, I’m glad he could. He’s a great guy and a great teammate so it was good to see him smiling on the podium and having his first win for Red Bull,” added Verstappen.

Christian Horner summed up the sentiment in the team report: “We are delighted for Checo to take his first win for the Team today. He has been extremely fast all weekend and it was a great boost for the team to see him on the top step of the podium.”

While the main show remains Lewis vs Max, with a few more results like this Checo might well factor in the title race should the two contenders continue to trip up and he is around to pick up the pieces. He is now third in the F1 drivers’ championship standings, 36 points shy of leader Verstappen after six rounds.