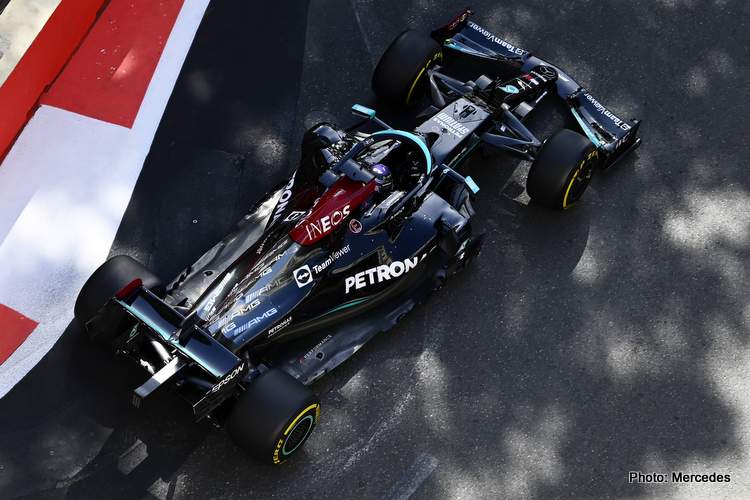 It was a thoroughly downbeat Lewis Hamilton who faced the media after an inconceivable day of free practice for the 2021 Azerbaijan Grand Prix for Mercedes, neither he nor teammate Valtteri Bottas were in the top ten on what was one of their worst Friday’s.

The reigning Formula 1 World Champion was unsettled throughout the day, in both incident-packed and tricky sessions, sounding resigned over the radio as he searched for speed from the Mercedes W12 whose performance fell off the cliff today.

Have they changed the Monaco software for Baku?

Silly question but such was the gap that one imagines anything is possible; in  FP1, Hamilton was seventh and a massive 0.709s shy of Max Verstappen’s best then, in FP2, the gap grew to 1.041s compared to Sergio Perez’s table-topping time.

Notably Bottas, in the other Mercedes, ended the day a full two seconds down on the leading Red Bull! Something is seriously amiss at Merc.

Afterwards, in the media pen. Hamilton told reporters: “We are just slow. I feel like I am driving well. The car felt better in the opening session and then in FP2 there was just no more time in it.

“We are definitely quite a chunk down, and everyone will be scratching their heads and looking into the data and trying to figure out how we can improve. It didn’t feel good. I was pushing, and on the limit, but the car is limited.

“There are areas where I should be quicker, but there is just no more grip so we will work on it. It is not easy to be out of the top ten on pace, and I don’t really know why we are where we are.

“It looks like we have gone backwards. The long runs were slightly better but there’s lots of work to do,” added Hamilton.

Mercedes engineer Andrew Shovlin confirmed: “Today was our worst Friday by some margin. Our biggest issue seemed to be the single lap; we’re a long way from our normal positions so clearly we need to find something very significant there.”

Bottas was on the same page as his colleague: “It was very tricky for us today, we are clearly lacking pace and it feels like we’re missing overall grip and sliding around.

“Monaco wasn’t easy but at least we were more or less there for qualifying. It’s been more of a challenging day than we anticipated and we need to figure out why.

“We were slightly better on the long runs but we’re still lacking pace. So overall not an easy day with lots of work to do – I think it’s going to be a long night,” added the Finn.

Hamilton and Mercedes – hunting his eighth title and their 16th in eight years – face the biggest challenge of their “Turbo-Era-II” reign as Red Bull are in full flight and Mercedes appear to be on the ropes like never before.

Of course, Saturday and Sunday will reveal a whole lot more. Stay tuned to this one.