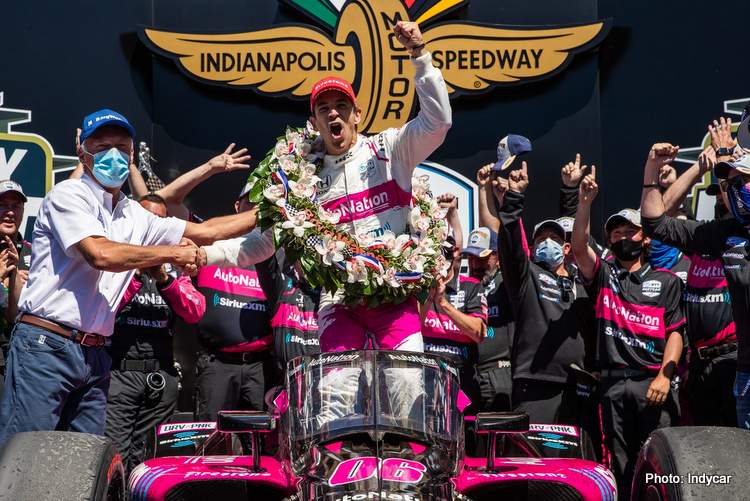 In a flair for the dramatic that matched his charismatic personality, Helio Castroneves joined the exclusive club of four-time Indianapolis 500 winners with a stunning victory Sunday at Indianapolis Motor Speedway.

But this one was different. Castroneves drove the No. 06 AutoNation/Sirius XM Honda of Meyer Shank Racing to the team’s first Indy win and first NTT Indycar Series victory. Castroneves, 46, also became the fourth-oldest winner in “500” history in his first Indycar start of the season, as he is scheduled to run only a partial schedule this year.

“It’s not the end; it’s the beginning,” Castroneves said. “I don’t know if it’s a good comparison, but Tom Brady won a Super Bowl, Phil (Mickelson) won the PGA, and now here you go. The old guys still got it, kicking the young guys’ butts. We’re teaching them a lesson.

“What a great team effort. Everyone was in sync. We didn’t make any mistakes. No. 4 – what a moment. I’m just so honored to be a part of this amazing group with A.J. Foyt, Al Unser Sr. and Rick Mears. This is absolutely a dream come true.”

They say you always remember your first kiss, but we don’t think @h3lio won’t forget his second, third, or fourth.#ThisIsMay | #Indy500 pic.twitter.com/xdXiB40rvx

Castroneves, who started eighth, finished a stirring duel with 24-year-old Spaniard Alex Palou over the closing laps by passing Palou with a daring outside move in Turn 1 on Lap 199. He held off Palou’s No. 10 NTT DATA Chip Ganassi Racing Honda to win by .4928 of a second.

The scintillating finish was the climax to the fastest Indianapolis 500 in history, with an average speed of 190.690 mph in a race slowed only twice by cautions for a total of 18 laps, both race-record lows.

2019 Indy winner Simon Pagenaud finished third in the No. 22 Menards Team Penske Chevrolet, .5626 of a second behind Castroneves. Pato O’Ward was fourth in the No. 5 Arrow McLaren SP Chevrolet, while Ed Carpenter rounded out the top five in the No. 20 SONAX Chevrolet.

Just 1.2424 seconds separated the top five despite the last caution period of the 200-lap race ending on Lap 124.

Castroneves’ jubilant celebration thrilled the crowd of 135,000 fans under sun-splashed skies and temperatures in the high 60s. He climbed the frontstretch fence along with crew members and team co-owner Michael Shank.

Many current and past drivers rushed to congratulate Castroneves on becoming a four-time winner, with 1969 Indy winner Mario Andretti kissing him on the head in beatification. Foyt also sent Castroneves a message of congratulations.

“This stage is absolutely incredible,” Castroneves said. “I love Indianapolis. The fans, they give me energy! I’m serious.”

Castroneves made his final pit stop on Lap 172, followed by Palou on Lap 173. Palou slotted in front of Castroneves when he exited the pits, and they formed a three-car train with O’Ward in the virtual lead of the race, as numerous cars in front of them needed to make one final stop before the race ended.

Pagenaud, Sage Karam, Tony Kanaan and Santino Ferrucci peeled off from the lead for their final stops by Lap 180, putting Felix Rosenqvist, JR Hildebrand and Takuma Sato in the top three, respectively, and about 12 seconds ahead of Palou, Castroneves and O’Ward.

Meanwhile, Castroneves and Palou diced for position behind that lead trio, knowing they had plenty of fuel to reach Lap 200 and cognizant they would become the lead pack due to pit stops needed by the fuel-thirsty cars of Rosenqvist, Hildebrand and Sato if a caution flag didn’t fly late in the race.

Castroneves inherited the lead on Lap 194, but Palou blasted past Castroneves for the lead in Turn 1 on Lap 196, reminiscent of Rick Mears’ decisive move against Michael Andretti in 1991 that led to his fourth win.

But Castroneves collected himself and placed his car in Palou’s draft on the front straightaway as they rocketed past the flag stand to start Lap 199. Then Castroneves returned the favor to Palou, using an identical outside move in Turn 1 to seize the lead.

Lapped traffic ahead over the closing laps posed a possible problem for Castroneves, but he used the wisdom gained over 20 previous “500” starts to hold off Palou, who showed skills beyond his years in just his second start.

“I’m super proud of finishing second,” Palou said. “It hurts a lot, but it was a good battle with Helio, and it’s better when you lose against the best.”

A caution on Lap 33 turned the race on its head early. Stefan Wilson locked his brakes and spun entering pit road in the No. 25 LOHLA SPORT/Cusick Motorsports Honda, hitting the outside pit wall with the right side of his car.

NTT P1 Award winner Dixon was among a group of cars that had not pitted before the caution, but those cars started to run out of fuel because the pits were closed while the AMR Safety Team removed Wilson’s damaged car. Dixon was leading when he, 2016 Indy 500 winner Alexander Rossi and five other drivers made emergency stops on Laps 36 or 37 for fuel. Dixon and Rossi’s cars would not refire, and they were a lap down when racing resumed on Lap 46.

Dixon raced back to the lead lap in the No. 9 PNC Bank Grow Up Great Honda, but he ended up finishing 17th. 2016 Indy 500 winner Rossi finished 29th in the No. 27 NAPA AUTO PARTS/AutoNation Honda, two laps down.

The next NTT INDYCAR SERIES races are the Chevrolet Dual in Detroit doubleheader, the headline races of the Chevrolet Detroit Grand Prix presented by Lear on June 12-13 on Belle Isle in Detroit.

The emotion is as real as the win.