Sato: A good opportunity to win a third Indy 500 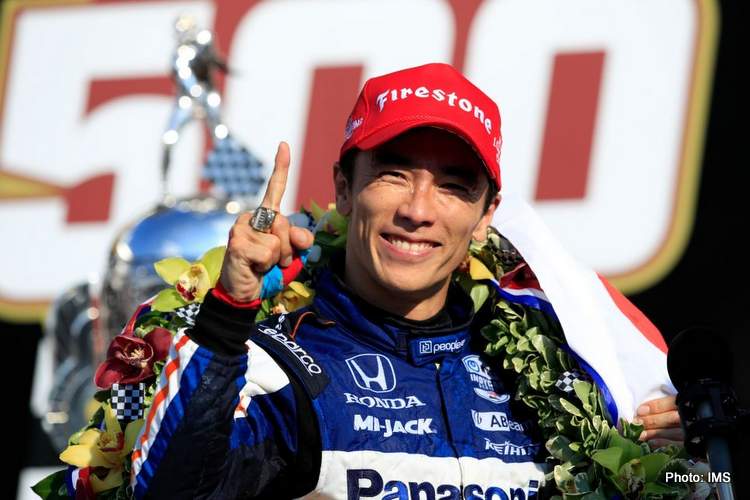 Takuma Sato held out his fists and flashed his oversized 2017 and 2020 Indianapolis 500 championship rings that spend more time in safekeeping than as a daily accessory.

The rings can be a bit much for a driver who still lives in an upstairs bedroom in the house of his long-time business manager in suburban Indianapolis.

“They’re way too big. Chunky,” Sato said, laughing. “I do wear them for special occasions. But an everyday ring is coming.”

Uncomfortable, perhaps, at the oversized rocks, Sato jokes he can still squeeze a third championship ring on one more finger.

Also on the horizon, the overdue victory celebration at Indianapolis Motor Speedway he was denied off one of the weirdest Indy 500′s ever.

The 44-year-old Japanese driver — who flirted with another Indy 500 victory in 2012 — wants another win, yes, to cement his legacy as one of the Brickyard’s greats, but also to enjoy the spoils of victory.

The pandemic pushed the 2020 race until August making Sato, the first Japanese-born driver to win the Indianapolis 500, the shortest-reigning champion at just nine months.

Sato held off Scott Dixon and won under caution last year in a mostly unsatisfying finish, and his Rahal Letterman Lanigan Racing team held a muted victory celebration inside a largely empty track.

“It was kind of a crushing thing in a lot of ways, but yet we had a race and it was a great race,” team owner and 1986 Indy 500 winner Bobby Rahal said. “It was too bad we couldn’t share it with people live, at least with spectators, but it’s great coming back, great to see people.”

Sato couldn’t even bring the Borg-Warner Trophy home to Japan for a victory tour as he did to great fanfare in 2017.

Sato’s Indy wins stamped him as one of the faces of elite Japanese athletes having success in the States in recent years. Hideki Matsuyama became the first Japanese golfer to win the Masters in April.

Naomi Osaka, born in Japan to a Japanese mother and a Haitian father, has four Grand Slam singles titles. Shohei Ohtani’s incredible two-way game has drawn comparisons to Babe Ruth as he blossomed into a star for the Los Angeles Angels.

The Tokyo Games, which he hoped to attend if done safely, are scheduled for later this summer.

Sato gave Ohtani a signed helmet and milk bottles when they met before an Angels game in April 2018. Sato threw the ceremonial first pitch — much slower than the 230.708 mph four-lap average he hit to qualify 15th for Sunday’s race — and Ohtani hit his first career MLB home run.

Sato tweeted congratulation: “Very happy to see a historic moment for Japanese golf world”) to Matsuyama when he won at Augusta National.”

“I love to see all the Japanese athletes performing on the worldwide level,” Sato said.

Sato has raised awareness for causes in his country as he did for victims of the 2011 earthquake and tsunami and had supporters rally around him like when, also in 2011, a sports writer for The Denver Post was fired for tweeting he was “uncomfortable with a Japanese driver winning the Indianapolis 500 during Memorial Day weekend.”

Born in Tokyo, Sato got hooked on racing when he watched his first Indy 500 on TV as just a boy. His father took a 10-year-old Sato to the 1987 Japanese Grand Prix Formula One race in Suzuka and his sensation for speed truly kicked in.

Sato’s first competitive races came on bicycles, and he later moved to karting and a ride in British Formula 3. He learned English at a private school and spent seven seasons in Formula One.

When sponsorship dried up overseas, Sato made the move to the United States and landed an IndyCar ride in 2011 with KV Racing Technology. He moved to RLL, drove for A.J. Foyt, won the 2017 Indy 500 for Michael Andretti and started a second stint at RLL in 2018.

Sato talked with The AP after a series of interviews with more than 70 members of the Japanese media and promotional photoshoots — though none as controversial as the one Rahal Letterman Lanigan staged on the opening lap of practice last week — to publicize the race in his homeland where his family stayed awake deep into the night to watch him win Indy.

Sato usually returns home three times a year, though he was limited to just one in the offseason because of the pandemic.

It was one of a series of adjustments he had to make, starting with crossing the line of bricks without 250,000 fans packed at Indianapolis Motor Speedway, a feeling he called “a little bit sad.”

His popularity at IMS may not rival the levels reached by, say, 2013 champion Tony Kanaan but he is a bona fide A-lister in Japan.

“Let’s put it this way, if you go to the racing venue, appearance for example at Suzuka, obviously no way I can walk outside. It’s impossible,” Sato said. “That’s only happening in the racing context. I can go to restaurant, I can go to convenience store, gas station by myself. Daily stuff, I can, no problem. Yes, some people recognize, cheer me. Certainly not the movie star (fame) that has been a problem for this life, no. Not that way.”

Sato, who has six career IndyCar wins in a career that dates to 2010, wants to bring his Baby Borg back to Japan. To help give Sato his due, the speedway will break from tradition Sunday and single out Sato during driver introductions.

The hope is that the 135,000 fans in attendance will give the Japanese driver the cheers he missed last year. Sato will also take part in a special race day interview in front of the fans.

Sato would be closer to the most famous names at Indy had he been able to take advantage in 2012 in his first serious run at the Indy checkered flag. Dario Franchitti won a wheel-to-wheel, last-lap battle, sailing away to the finish when Sato spun out trying to make one last pass on the inside and slammed into the wall.

“Without that, I wouldn’t have achieved ’17 and ’20, probably,” Sato said. “It was the first time I realized how hard it was to win that race. The first 100, 150 laps, going into Turn 1, it is completely different from the last lap. To compete and win the race, you need to be there to experience it. At the same time, I proved I could be there.”

As an Indy rookie in 2010, Sato finished 30th, two laps off the pace. In 2011, he qualified 10th and looked like a race day dark horse until he got too high going through one turn and wound up in the wall, the first car out.

He now feels right at home at the Brickyard.

Sato is one of nine former winners in the field and faces 20-1 odds to win Sunday and join seven other drivers who have won exactly three times. There are three four-time winners but Sato knows time is short in his career to join the exclusive list. Sato is trying to become the sixth driver to win consecutive Indianapolis 500s.

“It would be lying if I didn’t think about it, of course,” Sato said of a repeat. “I’m ready to take that challenge and I think realistically we have a good opportunity to repeat again.” (Report by Jenna Fryer)