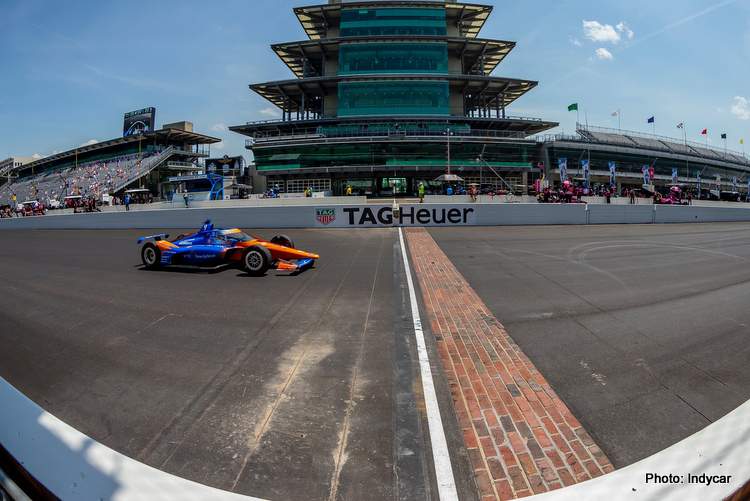 Scott Dixon put his car back on top of the Indianapolis 500 speed chart Friday, with much less fanfare, teammate Marcus Ericsson turned some heads by posting the best four-lap average ahead of the world’s greatest race next Sunday.

Now the Chip Ganassi Racing drivers will strategize how to get their cars, the team has four at Indianapolis Motor Speedway, into the “Fast Nine” qualifying session that determines the pole winner.

Qualifying begins Saturday (today) as the 35-car field is whittled down to 33 until the pole is decided this Sunday. The fastest nine drivers on Saturday shoot it out for the pole.

“I think any time a Ganassi car went out today, it improved and it improved in a big way,” said Dixon, the New Zealander who went 233.302 mph and has the first spot in Saturday’s qualifying order.

But under Indy’s unique qualifying format, the six-time IndyCar champ and 2008 race winner will need more than one good lap. He’ll have to string together four strong laps Saturday and four more Sunday.

Dixon might have shown all of his power Friday had he gotten a clean run as track temperatures cooled and speeds ticked up during the final 90 minutes of work Friday.

Ericsson made the most of his opportunity by clocking a 231.949 and edged out Colton Herta, who finished with an average of 231.726.

Mexican driver Pato O’Ward had the top Chevrolet and the third-fastest car at 231.522.

Honda cars continued to dominate on Indy’s oval by claiming seven of the top 10 spots after drivers received the traditional horsepower boost in hot, breezy conditions.

“It’s always interesting on days like this when you have an unfriendly wind in turn two,” 2016 race winner Alexander Rossi after finishing fourth on the four-lap chart. “Turn two is pretty tricky when the conditions deteriorate a little bit. But the Hondas brought some juice this year.”

The biggest surprise was that none of the four cars from the usually strong Team Penske garage finished in the top 10 on either chart.

Things didn’t always go smoothly on the track either.

Dixon complained about a slower car getting in his way during one trial qualifying attempt and O’Ward complained last year’s pole-winner, Marco Andretti, passed him while he was doing a test run.

With 35 cars turning more than 1,100 laps, most in the final couple of hours, some of the traffic should have been expected. Drivers only have two brief practice sessions prior to Saturday’s qualifying and a two-hour window late Sunday still scheduled.

But if Friday was any indication, suddenly warm weather and changing track conditions could turn this weekend into a wild shootout to set up the 33-car starting grid for the May 30 race.

“It’s competitive for sure,” said O’Ward. “Things can change a little bit and since the window of happy, at least with what I’ve been experiencing, is so small, you really have to nail it to put the car in fast nine positions.”

James Hinchcliffe has struggled for speed most of this week but seemed to get some momentum late Friday. His problems aren’t as big as A.J. Foyt, though.

Three of Foyt’s four drivers — Sebastien Bourdais, Dalton Kellett and Charlie Kimball — have been languishing near the bottom of the speed chart and could get bumped out of the field.

Foyt’s team expanded to four cars for this race and was stretched thin this month when Bourdais was wrecked twice and Kellett once. The crashes required rapid rebuilds of the speedway cars, but the 86-year-old team owner shrugged it off as bad breaks.

The four-time 500 winner said his cars would race if they were fast The team didn’t get any luck in the qualifying draw:

Bourdais drew the 35th and final spot in line while Kimball got No. 34.

“Well, when I was there, you had to beat about 30 or 40 cars, so we’re maybe looking to have to beat (two), and if we cannot beat (two), we need to go on the trailer,” Foyt said. “But I’m quite sure we’re going to make the race. We’ve got some good drivers. We’ve got good crews, and we’re going to be pretty fast. I never went there to run in the back.”

Other candidates who could miss the race include Sage Karam, who had problems Friday, and Marco Andretti, who has complained about his car all week.

Most people expect rookie R.C. Enerson to miss the race — his Top Gun Racing team was a late entrant and Enerson lost practice time when he needed an extra day to complete rookie orientation.

When seven-time Cup champion Jimmie Johnson decided to run the No. 48 Honda on road and street courses, he called Tony Kanaan to drive on ovals.

It’s been a perfect match. As Johnson has been getting acclimated to his new car, Kanaan settled right back in at Indianapolis Motor Speedway. Kanaan was at the top of the speed chart in Wednesday’s practice and he’s confident he could win next Sunday’s race.

Should Johnson decide to start running ovals, Ganassi would have to figure out a plan.

Dr. Terry Trammell, a longtime member of IndyCar’s safety team, was named this year’s recipient of the Louis Schwitzer Award on Friday.

Trammell was recognized for biomedical work to help make automobile racing safer. Trammell has helped provide trackside medical care since 1973. In the 1990s, he started collecting data from crashes to help update cars and tracks with technology that could reduce injuries.

The Schwitzer Award recognizes someone who demonstrates the innovative spirt of the pioneering race-car driver, who won the first automobile race at Indianapolis in 1909. (Report by Micaehl Marot)