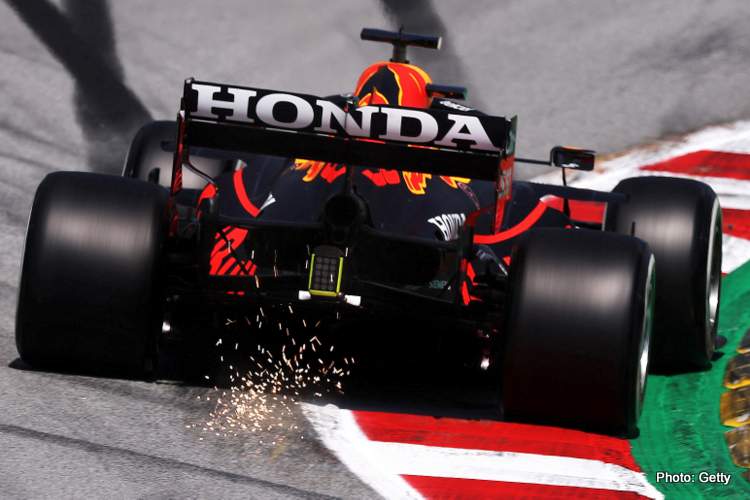 Maybe it’s a war of words, Formula 1’s off-the-battlefield rules of engagement to have a poke around at rival cars as Lewis Hamilton did, to discover what he described as a “bendy wing worth three-tenths” bolted to Max Verstappen’s Red Bull, during qualifying for the 2021 Spanish Grand Prix.

While Hamilton went on to claim his 100th pole position, it was very, very close with Verstappen a few hundredths shy of the Mercedes at the end of qualifying at Circuit de Barcelona-Catalunya on Saturday.

Afterwards, while not accusing of his rivals of bending the rules, Hamilton did point out the “bendy wing” issue during his post-race interview with Sky F1: “It’s the goal to get on the front row and be first.

“It’s 600 metres down to Turn 1, there’s often a headwind and it means the guys get to drag you, which is really difficult. The Red Bulls are really fast on the straights. They have this bendy wing on the back of their car which they put on [Saturday] and they gained at least three tenths from this wing.

“So they will be quicker down the straights than us and it will be hard to keep them behind, but that doesn’t mean it will be impossible. Timing and rhythm will be everything,” added Hamilton.

Indeed it was, Verstappen muscled ahead into Turn 1 after both title rivals powered well off the front row of the grid and for much of the first half of the race it was a stalemate with Red Bull out front holding off the Mercedes until he could no more.

Reacting to Hamilton’s “bendy wing” revelations, team boss Christian Horner defended his car to assure all the RB16B was above board: “Of course the car’s scrutineered thoroughly and there’s pull back-tests, there’s all kinds of different tests it has to pass.

“The FIA are completely happy with the car, it’s passed all of those tests that are pretty stringent. It’s something that Toto has mentioned to me previously. I doubt it was Lewis’s opinion, it probably came from elsewhere,” Horner told RaceFans.

Whatever the case, after Sunday’s drubbing in Spain by Hamilton and Mercedes, Horner and his men need to find more “bendy wing” or similar performance-enhancing solutions to allow Verstappen to challenge on equal footing, anything less and it will be another season of playing catch-up on all fronts.