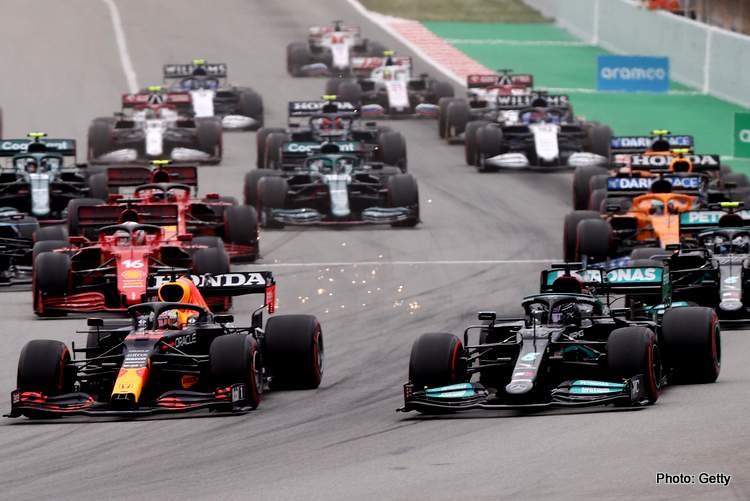 Lewis Hamilton won the Spanish Grand Prix on Sunday, Round 4 of the 2021 Formula 1 World Championship, after an intriguing battle with Max Verstappen who gave it his all but in the end never had an answer to his rival.

It could be described as a game of cat and mouse, but more aptly it was a race of cat and cat, as F1’s Top Cats clawed it out for victory at the 2021 Spanish Grand Prix.

Yet again, Hamilton versus Verstappen took centre stage at Circuit de Barcelona-Catalunya, a veritable two-man show rendering all other rivals as bit players. Valtteri Bottas was third in the other Mercedes.

Verstappen blitzed the start, while Hamilton’s Mercedes was not slow the Red Bull driver had the apex of Turn 1 locked into his GPS and nothing would stop him hitting it as he muscled past the pole man to take the early lead of the race. It was Imola all over again without the broken wing bits.

The Red Bull driver held on to the lead after a safety car period to remove Yuki Tsunoda’s stricken AlphaTauri, which bunched up the field. But Verstappen caught Hamilton napping and stayed in the lead at the restart; the Mercedes tucked under his wing, always within a second or two adrift but hanging in doggedly.

On lap 24 Verstappen ducked into the pits for his first stop, while Hamilton stayed out four laps longer and returned to a stalemate behind the Red Bull; the pursuit relentless but to little effect as the Dutchman was driving the wheels off the RB16B.

Then on lap 43, Mercedes pitted Hamilton against expectations, he bolted on mediums and started to whittle away a Verstappen’s lead of 22-plus seconds at a second or more per lap, with teammate Valtteri Bottas getting the move over call to allow the flying #44 Merc past which the Finn did but not without delay.

It was proper Hammertime, the Mercedes carving chunks out of the lead until the inevitable, on lap 60, on the main straight with DRS wide open Hamilton blasted past never to be seen again and bagged maximum points for the third time this season

It was Hamilton’s sixth victory at the Spanish Grand Prix, his fifth in a row and 98th career win in the top flight, he said afterwards: “I was just hunting. I was so close for so long and I didn’t think in doing that I was going to be able to make the tyres last.

“But I just managed to. It was a long way to come back from 20 odd seconds back but it was a good gamble, a really great strategy from the team. I was about to have a shot at getting past him before I pitted right at the end and I was really conflicted.

“Do I come in or I do ignore the call and stay out? Obviously, I did what the team asked and naturally, that’s because there’s a great trust between us. Just a remarkable job by everyone in this team. What a day,” added Hamilton.

For Verstappen it was a case of what might have been. Had Sergio Perez not messed up qualifying and spent his day toiling to finish fifth he may have been able to back-up his teammate; had Red Bull been smart and pitted him for the soft (or something!) when it was clear Hamilton was reeling him at a fast rate of knots.

Furthermore, Verstappen may have had a better car for the opening races of this season, however on today’s evidence the Blues might be chasing yet again as Mercedes have untapped some wicked pace from their once ‘problematic’ package. This second place will hurt Max to the max.

Verstappen said in Parc Ferme after his 100th race with Red Bull: “In a way, I could see it coming. Already at the end with the soft, he was faster, and then when we were put on the mediums he clearly had a lot more pace, he could just stay within one second.

“There was not much we could have done. They went for another stop and then I knew it was over because I was already struggling with the tyres and you could see every lap he was getting closer and closer. I was just a sitting duck.

“We were just clearly lacking pace. I tried everything I could. We are not where we want to be. We have to push hard and catch up because at the moment we are a little bit slower,” insisted the Dutch driver.

Bottas did as expected of him after duffing his start, but had no answer for the two in front. Even with Verstappen on rapidly ageing tyres the Finn could do nothing to threaten.

He did the Wingman thing to great effect once again; afterwards Bottas reported: “What made it more tricky was I lost a place to Charles at lap one. He chose a better line through Turn Three. That compromised the race a bit. It is a bit of a shame but I am pleased to make it to the podium.”

Charles Leclerc delivered a gutsy performance, getting past Bottas in the early stages but lost out on a podium as the Mercedes was simply a  better package on the day. Nevertheless for Ferrari, Best of the Rest means a positive weekend. Carlos Sainz was seventh on a good day for the Reds.

Enjoying his best showing for McLaren, Daniel Ricciardo was sixth on a day in which the Orange cars were not as effective as they had been on the previous three Sundays. Lando Norris, the stand out driver of the early races, never found the sweet spot and ended the day eighth.

Alpine also showed far more firepower in qualifying than they did in the race with Esteban Ocon ninth from fifth on the grid and local hero Fernando Alonso 17th, despite a feisty first half of the race.

Tsunoda has ground to a halt at Turn 10#SpanishGP 🇪🇸 #F1 pic.twitter.com/TOP5mq40WE

The final point went to Pierre Gasly, the AlphaTauri driver penalised five seconds for improper positioning on the grid which compromised his race. His teammate, as mentioned, was an early casualty.

Both Aston Martin’s were out of the points. The others were equally insignificant in terms of the bigger picture, apart from hapless Nikita Mazepin who needs to read the rule book on blue flags, the unpopular Haas driver holding up Hamilton during a crucial point in the battle for the lead. 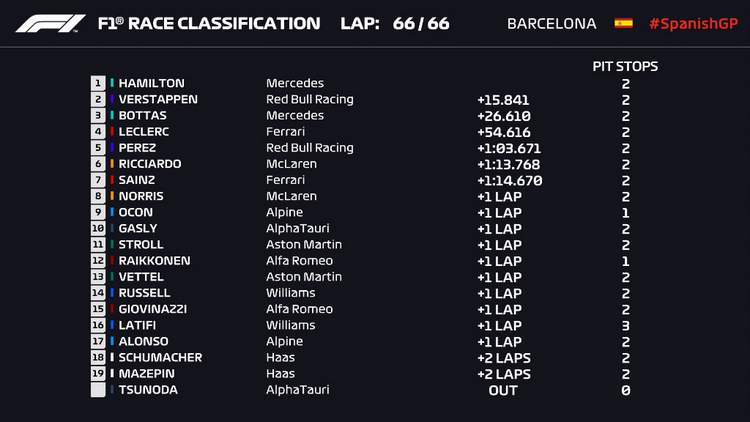 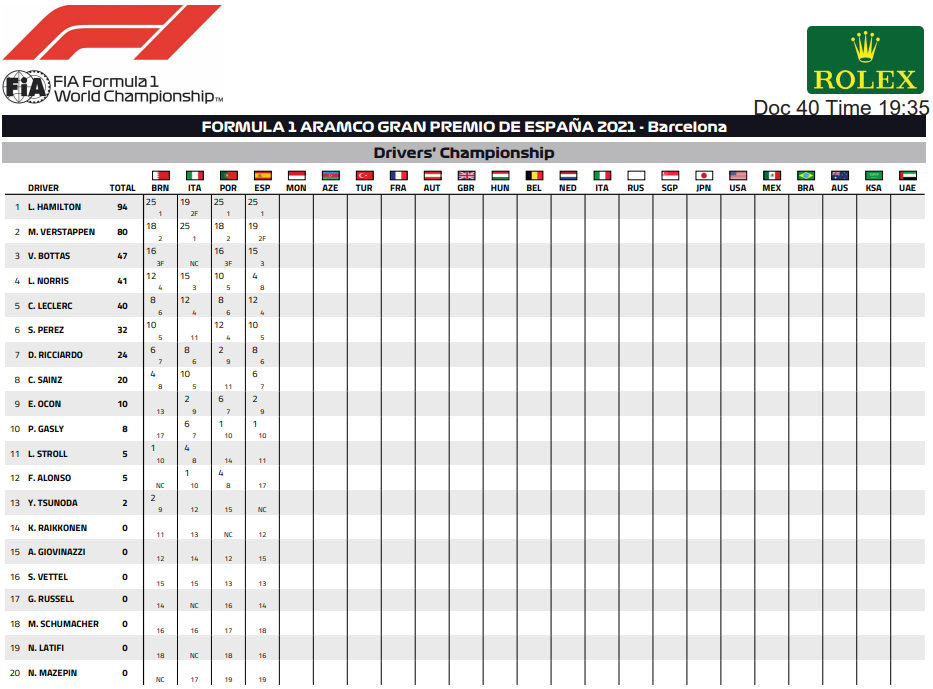 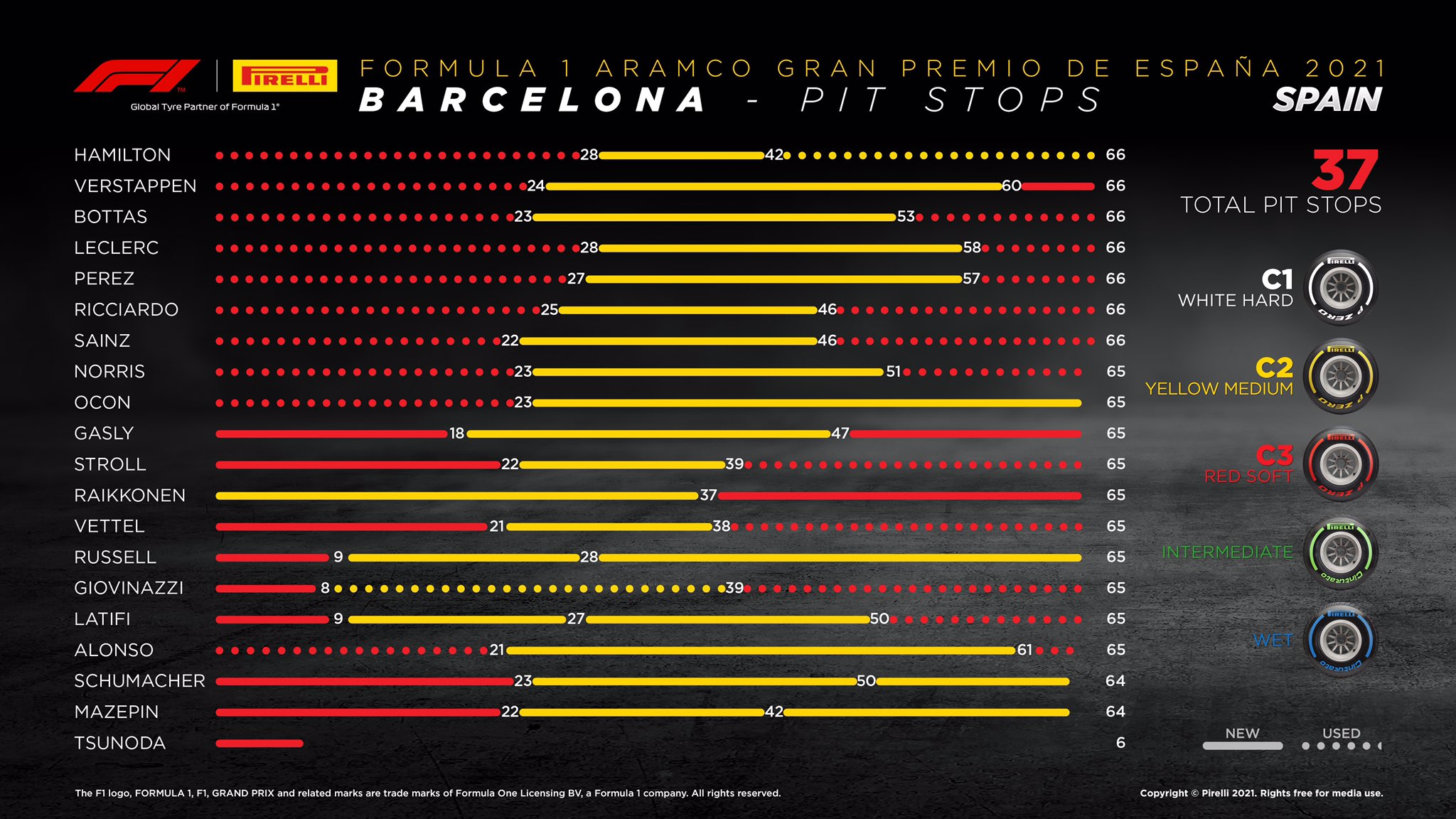