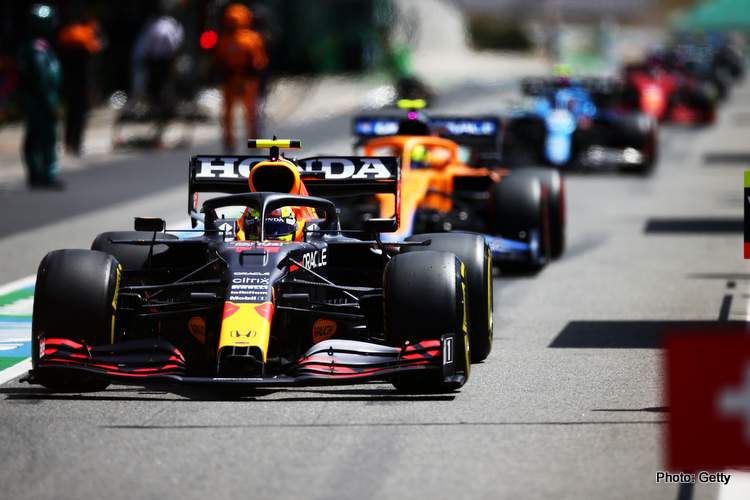 The 2021 Portuguese Grand Prix featured a chess-like race with the slimmest of margins between rivals; mistakes, strategy and the aid of a wingman would help Lewis Hamilton triumph.

Let’s crunch the numbers and see what really went on at Autodromo do Algarve in Portimao.

Easily the most difficult assessment to make in F1 is the illusive oddity otherwise known as ‘race pace’.

Nobody really knows what it is, it is liquid in nature comprising of a vast array of convoluted variables and various items on the cars themselves requiring some form of management throughout the race, it is impossible to conclusively put an exact number to ‘race pace’.

Over time I’ve come to believe that if you extract each drivers’ fastest lap every five laps, ignoring safety cars and virtual safety cars, and average that time, you’ll have a data set that best represents the true performance of each car. I call it “Best Case Race Pace”.

Below I have assembled “Best Case Race Pace” for the Portuguese Grand Prix. Laps between 1-5 have been ignored due to the safety car. I have extracted the best lap of each driver for laps between 6-10, 11-15…….61-66 and then averaged the time into 1 single time.

The end of race fastest laps of Max Verstappen and Valtteri Bottas have also been ignored. While the resulting one single time really has no meaning, it’s the delta from time to time that best represents each driver’s race pace lap time relationship.

What everyone wants to know is who was the fastest on Sunday and by how much as the debate will surely rage on between the two leading outfits in days to come.

The answer is the Mercedes of Lewis Hamilton was without question the faster car on Sunday, but it’s marginal. The reality is the pace was so marginal between the top 3 that it took mistakes for drivers to pass each other.

It begins with the Safety Car restart. Hamilton, who later admitted that Bottas launched just as he was having a peek at Verstappen in his mirrors was forced to concede position to Verstappen into Turn 1.

Hamilton would later recapture the position from Verstappen after Verstappen had a sizable moment in Turn 14 towards the end of lap 10 allowing the Mercedes of Hamilton to close in and attack Verstappen regaining second position.

Hamilton would go on to put pressure on the pole sitting race leader Valterri Bottas and on Lap 20, forcing what looked otherwise as an elaborately orchestrated reconfiguration of Team Mercedes running order with Bottas unselfishly leaving his main championship rival and teammate far more real-estate, while racing for the lead, than he did for the Williams of George Russell in Imola only two weeks earlier while battling for ninth position.

What followed ended any possibility of victory for Verstappen as Hamilton marched away from his rivals despite reporting high tire wear. Verstappen remained regulated behind the Mercedes for 17 laps unable to mount an attack for second position.

Red Bull would attempt an undercut on Valtteri Bottas pitting on lap 35 with Bottas eventually covering Verstappen a lap later initially, followed by an unforced error on cold tires allowing the Red Bull of Verstappen through to claim second position. By then it was too late to catch Hamilton.

Analyzing the laps between Lap 20 and Lap 36, Hamilton extended a gap of 3.961 seconds to Verstappen, or approximately 0.233s/lap.

When the laps of Hamilton and Verstappen are compared directly, and the laps from lap 20 to 37 behind Bottas are deleted, Hamilton carried a per lap advantage on Verstappen of 0.055s. The conclusion is simple, Valtteri Bottas was the single biggest contributor to Hamilton’s victory.

Hamilton executed flawlessly, but the win in its entirety comes down to the 3.961 seconds he opened up on Verstappen between lap 20 and 36.

Without that gap, there’s no reason to believe that the Red Bull could not have held on to the Mercedes and kept him at the very least, within striking distance.

Otherwise every drivers’ finish was a reflection of their race pace. This is mostly attributed to every driver being on a one stop strategy. 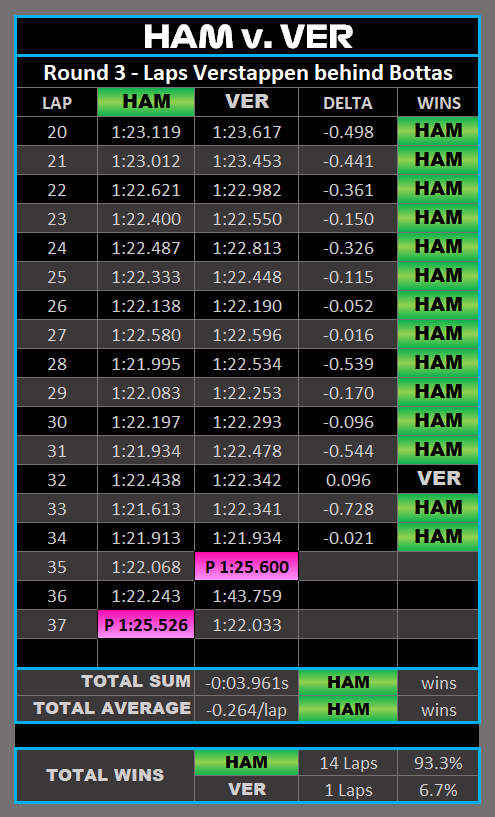 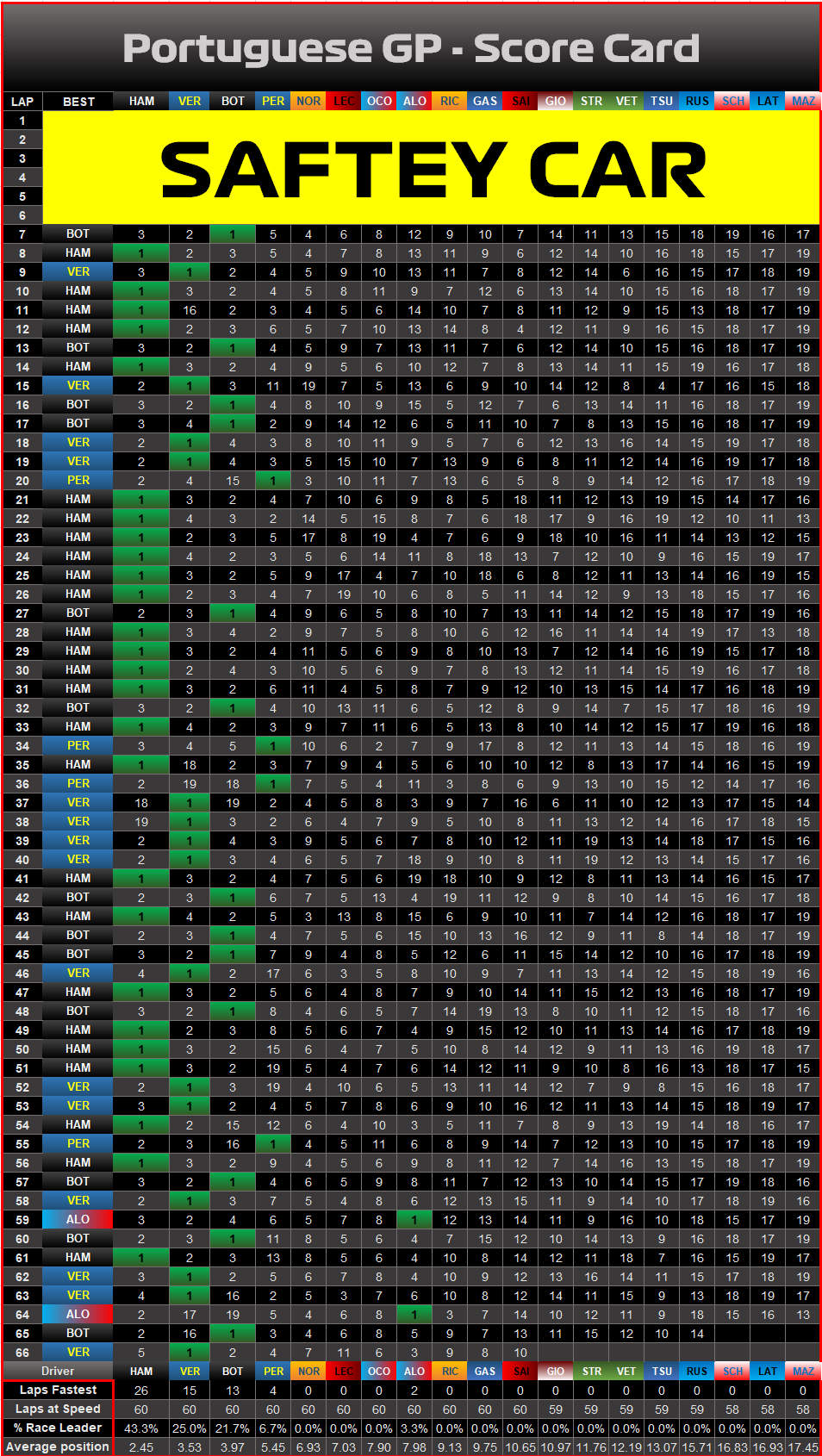 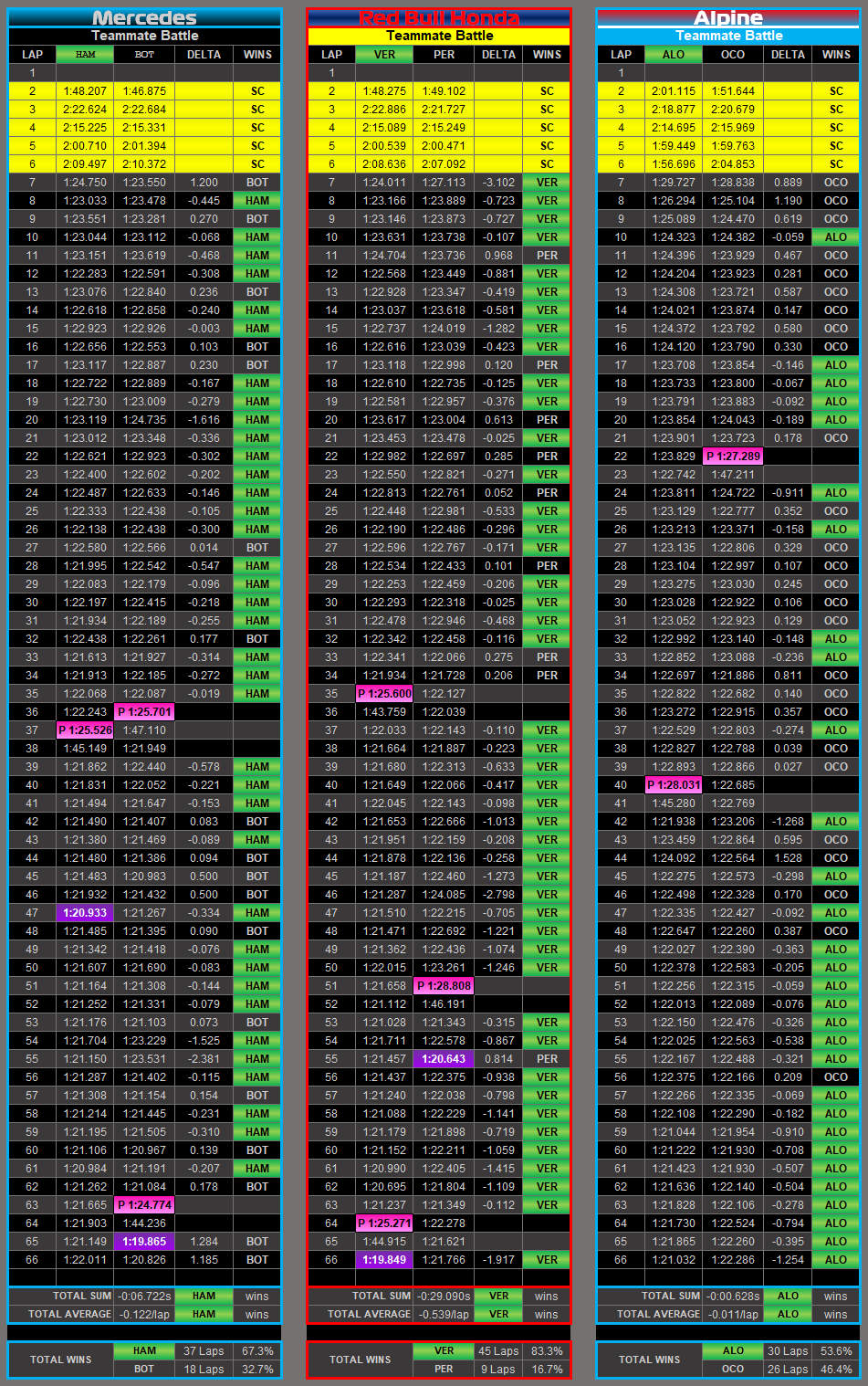 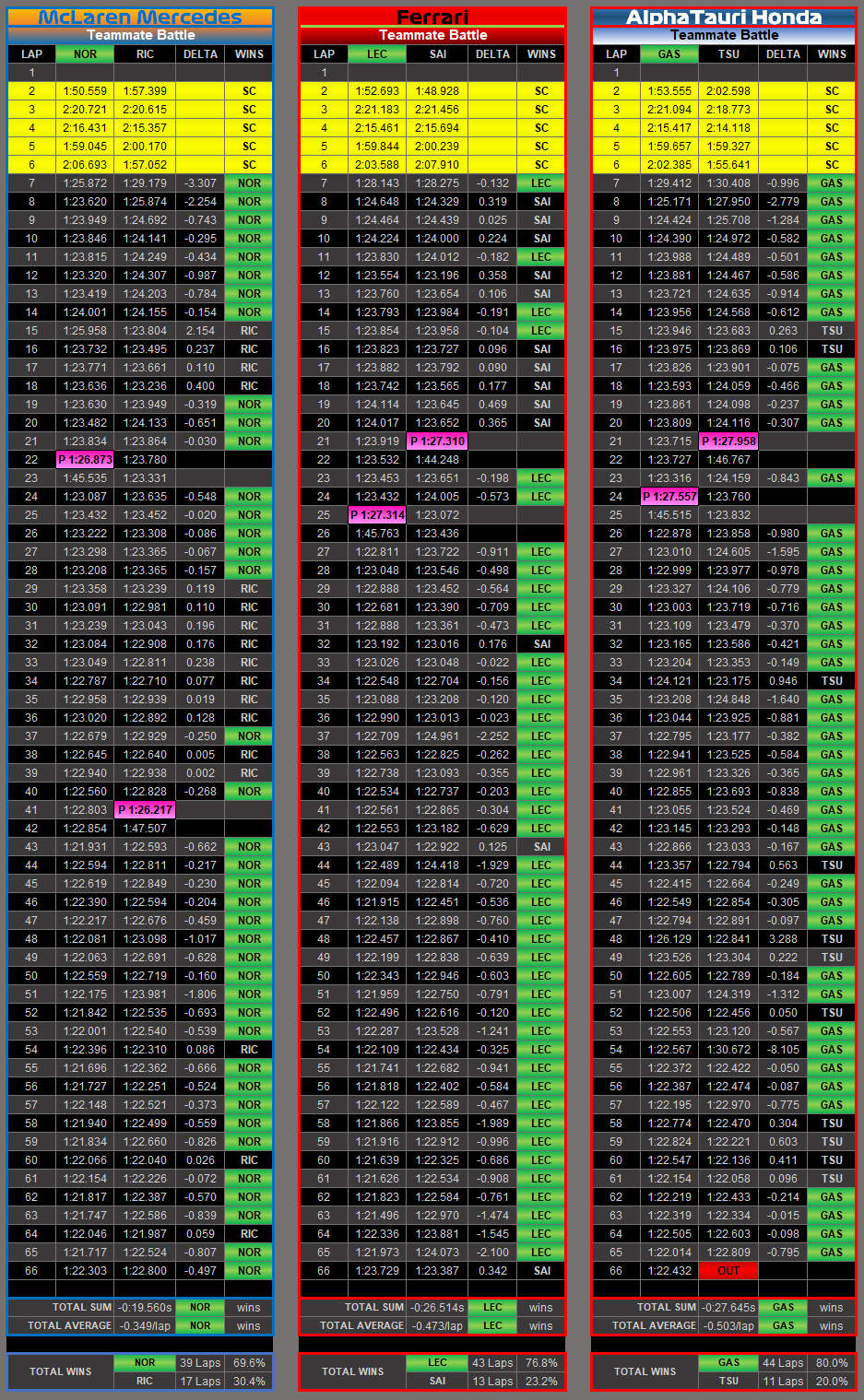 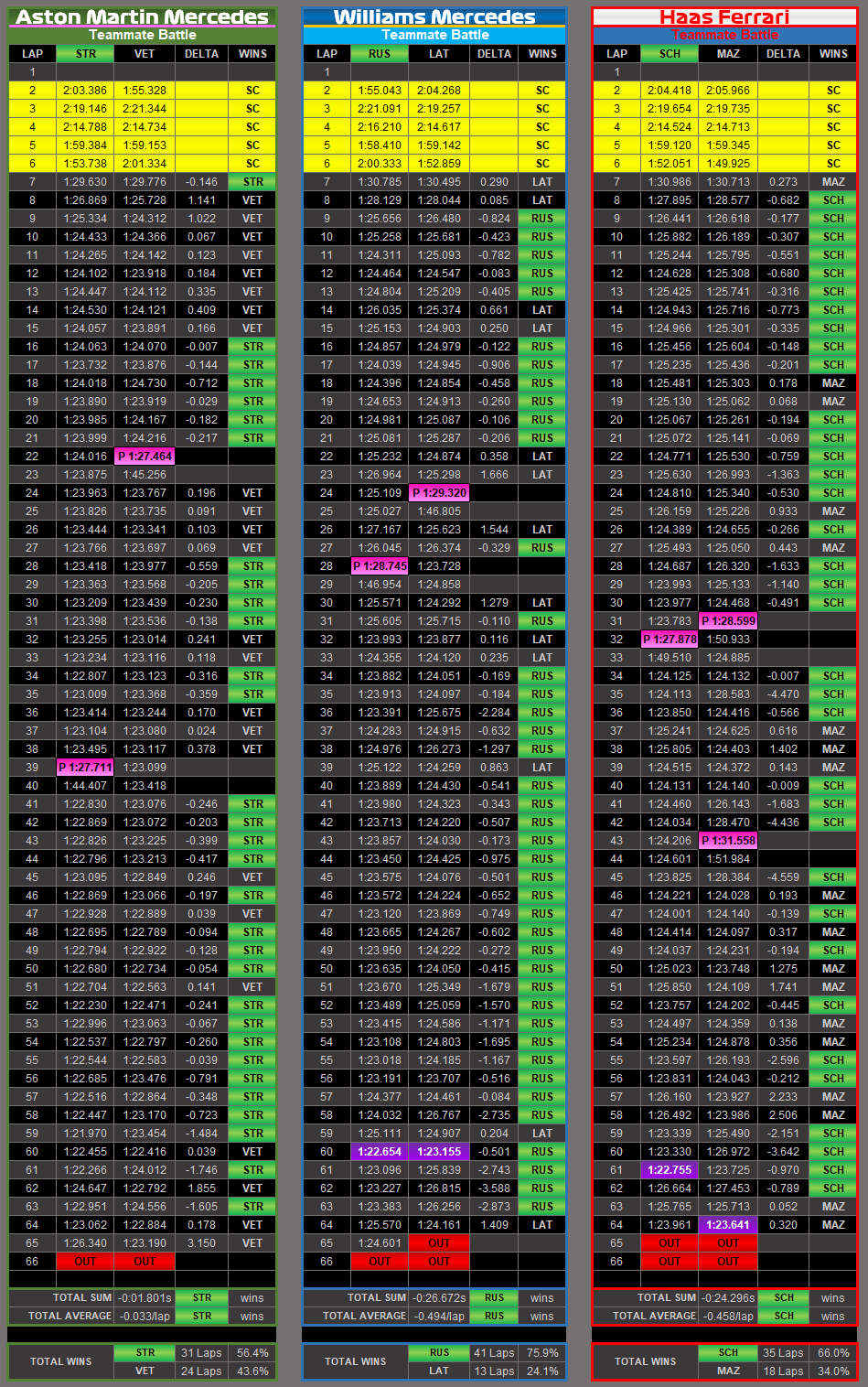