Wolff: George should have never launched 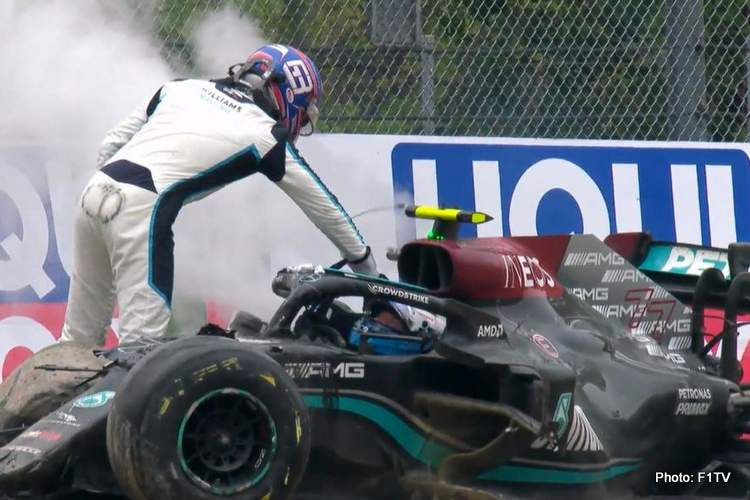 One could hazard a guess that George Russell is in for a scolding from Mercedes team boss and mentor Toto Wolff after the Williams driver crashed into Valtteri Bottas during a chaotic 2021 Emilia Romagna Grand Prix.

The pair collided at high speed when Bottas stuck to the dryline as they hurtled into the Variante Tamburello, for the 32nd time, Russell with DRS wide open opted to go the long route, to the outside but his right-rear struck a wet patch, clipped the grass and the Williams whiplashed violently into the Mercedes beside it.

The cars shredded apart as they made contact at high speed, in a blink of an eye both lay broken and beached; race stoppage required to clear the mess. Russell alighted his wreck, charged at the stricken Mercedes to give Bottas a piece of his mind as well as a smack to the helmet.

Considering the crash was his fault, it was a surprisingly ugly and nasty gesture from a highly respected young driver. Obviously, the antics did not go unnoticed by Wolff, who reported after the race: “Unfortunately, the crash between George and Valtteri was unnecessary.

“Valtteri had a difficult first 30 laps and shouldn’t have been there but George should have never launched into this manoeuvre considering that the track was drying up.

“It meant taking risks and the other car is a Mercedes in front of him and in any drivers’ development as a young driver you must never lose this global perspective. Lots to learn for him I guess,” the Mercedes team boss said, clearly not impressed with his young charge.

That was after Wolff had cooled down and his true words tempered by the political correctness of the post-Imola PR soundbites. Prior to that when told Russell had said that Bottas jinxed dangerously, a livid Wolff replied: “Bullshit!

“The whole situation is absolutely not amusing for us, to be honest. It’s a big shunt. Our car is almost a write-off in a cost-cap environment, that is certainly not what we needed, and probably it’s going to limit upgrades that we’re able to do.

“Now I don’t want [Russell] to try to prove anything to us, because one thing I can say since knowing Valtteri for five years, he’s not trying to prove anything,” added Wolff in defence of the #77 driver.

Russell is the prime candidate to replace Bottas at Mercedes, so there is no love lost between the duo but to accuse the passive Finn of trying to “kill them both” was over the top and theatrical antics to smokescreen his own gaffe. Not the first time the youngster has messed it up at Imola…

Bottas, who gave Russell the middle finger treatment when he got up close and personal immediately after the shunt, was adamant that the Englishman was the culprit, and while that may be so, why was the potent Mercedes so far down the pack in his hnads? What was he doing being overtaken by a Williams anyway?

Mercedes trackside engineering director Andrew Shovlin explained: “Valtteri’s day was even more difficult. He was finding the warm-up more of a challenge than Lewis, struggling mainly with rear grip. That was the case on both inter and slick tyres but on the transition to dry it was particularly bad.

“He got swamped by a few cars and ultimately, that was what started the events that triggered the crash with George and the end of this race. Overall, a frustrating weekend and one where we have plenty of areas that we need to look to for improvement.”