Russell: Was Valtteri in the wrong? Probably not 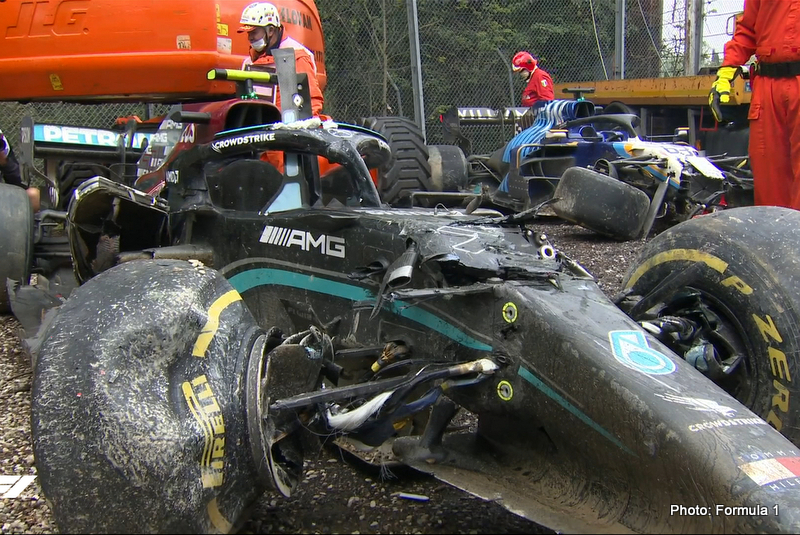 George Russell has admitted that his collision with Valtteri Bottas during the Emilia Romagna Grand Prix “looks very different” now that he has had a chance to review the footage.

Russell was visibly frustrated following the incident and went up to Bottas while he was still sat in the car to remonstrate with the Finn.

Speaking after the race, Russell said that Bottas made a slight movement that was “incredibly dangerous” and led to both drivers crashing at high speed.

However, the Williams driver has since softened his stance.

“When you can review everything and look at it in slow motion and everything, and from certain camera angles, it all looks very different,” he said. “One camera angle makes it look one way, another camera angle, like I said, when you watch it from behind on the CCTV footage it looked quite clear, in a different opinion.

“I was more frustrated because of the speed of the incident. I’ve never, ever had a crash at the end of a straight when we’re absolutely flat-out, and we’ve all seen the dangers of motorsport very recently and to be honest I would have reacted exactly the same had it been battling for the win, battling for ninth or battling for last. Because I just thought it was unnecessary and it was avoidable.

“As I said, Valtteri did nothing that was outside the rules, but you have to take an element of responsibility and consideration into the fact of the conditions.

“There’s certain things you can do in certain ways when everything’s stable, but when it’s a damp track, there is a kink, and you’re pushing someone towards the grass, onto the damp patches at over 200 miles an hour. There is a high risk of an incident, and that is why I was very disappointed because I just thought that was beyond a lack of respect, really, not towards me, but just a lack of respect towards these cars.”

Mercedes team principal Toto Wolff said after the race that Russell should not have gone for the move given the conditions and that it was a Mercedes ahead of him, but the 23-year-old rejected this idea.

He added: “Could it have been avoided? Yes. Was Valtteri in the wrong? Probably not. Could he have done something slightly more? Maybe.

“Was I in the wrong? I caused the crash by spinning, but was I wrong to go for that overtake? Absolutely not. You would have been foolish to lift at that position.”