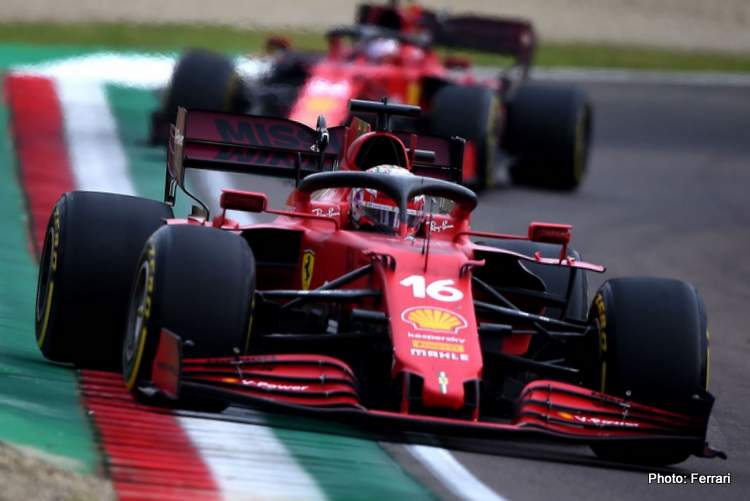 Ferrari boss Mattia Binotto can breathe easier after the 2021 Emilia Romagna Grand Prix in which Charles Leclerc and Carlos Sainz finished fourth and fifth respectively confirming, at least, the Reds have a far better car than last year.

However, as good as it was on home soil yesterday, they were still a far way from the top step of the podium as race winner Max Verstappen in the Red Bull crossed the line 25 seconds ahead of the best red car.

Ferrari headlined their post-Imola report: “Good points haul but a hint of disappointment.”

On a day that started wet and ended dry, Leclerc delivered a gutsy and spirited performance that has become his trademark, at one stage he was second with a hefty advantage over Norris in third.

But the red flag triggered on lap 32, to clear the debris caused by the collision between the Mercedes of Valtteri Bottas and the Williams of George Russell, did the Charles no favours.

The stoppage that ensued concertinaed the pack and on the restart Norris’ McLaren got buy to claim third place where he remained, behind Verstappen and Lewis Hamilton who stormed through the field to second place after nearly beaching it permanently at Tosa.

This also put Sainz into play, the Spaniard earlier looking a little like his predecessor with a ragged performance which annoyed him to the point of shouting into the radio: “How many mistakes am I going to do?”

Whereupon he was told over the team radio to calm down, which he did and, helped by the race stoppage delivered a much better second half of the race to finish a couple of seconds behind Leclerc, who hardly put a foot wrong all day and was the better man all weekend in Red.

Team boss Mattia Binotto summed up after the race: “On a completely different track and in very different conditions to the first race of the season, this result confirms that the work we are doing is going in the right direction.

“The fact we are unhappy about not getting at least one driver onto the podium is further proof of that. We can definitely say the outcome of these first two races is a positive one.

“Not since the second half of 2019, specifically the races in Japan and Mexico that year, have we had both drivers in the points in two consecutive races. We must continue like this and show, race by race, that we know how to improve. Now I can’t wait to go to Portimão for the next Grand Prix!” concluded Binotto.

The report added: “Ferrari can leave Imola knowing that the work carried out on the SF21 has produced a definite step forward compared to last year’s car.

“Furthermore, when compared to the race in Bahrain, the race pace at Imola matched what had been seen in qualifying, better than the closest rivals in the wet and similar in the dry.”

Leclerc said afterwards: “It was an interesting race, although a bit frustrating because I was in a really good place before the red flag which wiped out the advantage we had built up in the first part of the race.

“Unfortunately, I struggled after the restart, since I was vulnerable in the straights and that made it difficult to fight or defend from others. In fact we had taken a bit of a gamble with some more downforce, which helped us in the rain, but made it more difficult for us when it was dry in the second part of the race.

“Overall, I’m very happy with the performance we had today. There is definitely a lot of motivation. We are fighting for more interesting positions now and this is positive. We have been working well and if we keep it up, I’m sure that we will be fighting for the top places soon.”

Sainz said of his adventures: “My pace was very strong in the wet and also very solid in the dry, so I’m happy with that. I was quite comfortable all along, and starting P11 with a P5 finish is encouraging.

“I just need to keep my head down and continue working in this direction, because I think it’s the correct one. Collecting solid points today was definitely good for the team and I am very pleased with the double points to finish,” added the Spaniard with no mention of his early race waywardness.

Binotto his team at Maranello appear to be turning fortunes around with the SF21 far more effective than the woeful SF1000 of last year.

How much more they can evolve and develop the current package remains to be seen.

The reality, for now, is they will need to find something extra to beat a resurgent McLaren to third in the F1 pecking order, while it is fair to say that mixing it with the Mercs and Bulls this season is a bridge too far for the Scuderia.