Leclerc: The car is quick, I made a mistake 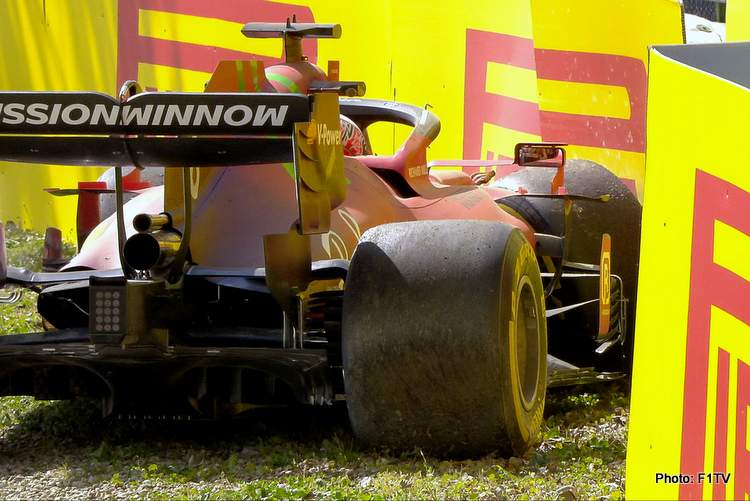 Ferrari will be happy with the first day of the 2021 Emilia Romagna Grand Prix in their back yard, the Reds ending the day fourth and fifth on the timing screens with Carlos Sainz a tad quicker than Charles Leclerc who crashed during FP2.

Arguably, the Scuderia may be flattered by the result as neither Red Bull figured in the top five, while the similarly Honda-powered AlphaTauri of Pierre Gasly was quicker than. Also McLaren were strangely AWOL on Friday.

The team reported from Imola that Leclerc did a 1:15.367, which would have been the fastest time overall but the time was disallowed as he had exceeded track limits by just a few centimetres at the Piratella corner.

Towards the end of the session, both drivers ran in race trim. Sainz completed a total of 30 laps, while with just two minutes of the session remaining and having completed 28 laps, Leclerc went off into the barriers at Rivazza 2, damaging the front right suspension on his SF21.

Nevertheless, despite the late crash in FP2, Leclerc was chuffed with the day at Imola: “This was definitely a good day, despite the time lost in the first session and the incident just at the end of the second one.

“The car is quick, the balance is good and I felt at ease immediately. Of course, it’s only tomorrow that we will find out the pecking order, because maybe someone hasn’t shown their full potential.’

Although they have extracted pace relative to last year in Ni=ovember with the SF1000, the drivers had to push hard and at times over the edge as Leclerc did when slammed the wall late in FP2.

🚩 RED FLAG: Session will not restart🚩

He explained: “This afternoon, I made a mistake while pushing flat out in race trim. I’m sorry for the guys but at least there were only two minutes to go.

“I was pleased with my quick lap: the time that was cancelled because of a couple of centimetres would have been quickest overall and even over a long run I think we have found a good balance.

“The track is really great and I can’t wait to get back in the car tomorrow for qualifying, when I think a good result can be within our grasp.”

Sainz had a strong day. although it can be seen he is now quite at home in the cockpit of the Red cars as his homegrown teammate, but the Spaniard keeps on adding to his experience with the car and the new team setup that Ferrari is for him.

He reported afterwards: “It was an important day for me as I was looking forward to driving the car for the first time somewhere other than Bahrain. The different corners, tarmac, temperatures, etc. made it an interesting day for sure.

“It seems we could be a bit more competitive this weekend and, in general, the feeling with the car was positive as the conditions suits us better.

“You can feel some more grip and I am enjoying it out there, building up the confidence lap by lap trying to find the limit around the entire track.

“I’m not quite there yet, but today was a good start to the weekend and we still have FP3 to fine-tune everything ahead of Qualifying tomorrow,” explained Sainz.