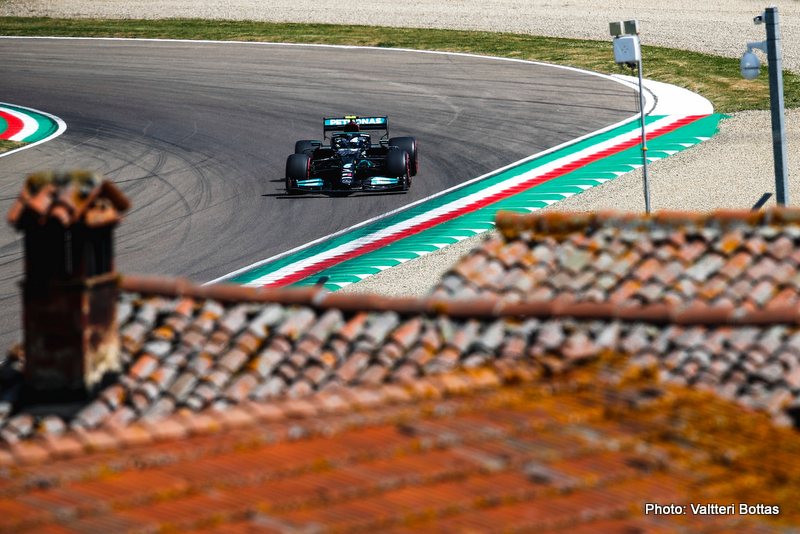 Valtteri Bottas topped FP2 ahead of the Emilia Romagna Grand Prix at Imola, with the Finn ending the session 0.010 seconds clear of teammate Lewis Hamilton.

Pierre Gasly was just 0.078 seconds back from Bottas in third, while an early drive shaft issue for Max Verstappen meant the Dutchman could only manage five laps in total and finished the session 14th.

The Ferrari duo of Carlos Sainz and Charles Leclerc ended the session in fourth and fifth respectively, while Sergio Perez was sixth for Red Bull after a more low key session for the Mexican.

Yuki Tsunoda was seventh, ahead of Lando Norris in eighth, Antonio Giovinazzi in ninth and Lance Stroll, who rounded out the top 10.

More bad luck in Italy! 😩 Max encounters a problem on the start finish straight and is forced to pull over, putting an end to his session. #ImolaGP pic.twitter.com/cA9PAayJLN

The frontrunners started the session on the medium tyres, with Hamilton and Bottas taking turns to top the timing sheets.

Ferrari too were impressive in the early running as Leclerc and Sainz showed decent speed on the mediums, while Gasly continued to look competitive in the AlphaTauri.

With just over 10 minutes of the session gone Verstappen saw his Red Bull come to a halt, bringing out the virtual safety car.

The marshals were quick to recover the strewn RB16B, but the Dutchman was unable to return to the track before the end of the hour-long session.

Ferrari were one of the first teams to strap on the soft tyres with just under 40 minutes remaining and Leclerc momentarily went to the top of the timing sheets, only for the Monegasque driver to see his flying lap deleted for exceeding track limits.

Having put on a pair of softs himself, Gasly then split the Mercedes to go second with a 1:15.629, only for Hamilton to retake second place shortly afterwards.

The session was brought to an end a couple of minutes early after Leclerc hit the barriers at Turn 19, with the marshals red flagging the action as a result.

🚩 RED FLAG: Session will not restart🚩

Nicholas Latifi enjoyed a strong session in 12th place for Williams, with the Canadian almost three tenths up on his teammate George Russell.

Latifi split the two Alpine cars of Esteban Ocon and Fernando Alonso, who were 11th and 13th respectively, while Sebastian Vettel was 15th for Aston Martin.

Daniel Ricciardo had a disappointing session on his second race weekend for McLaren in 18th, one place behind Kimi Raikkonen.

Nikita Mazepin missed the first 25 minutes of the session due to a gearbox change after his crash in FP1, and the Haas driver finished the session in last, half a second adrift of teammate Mick Schumacher. 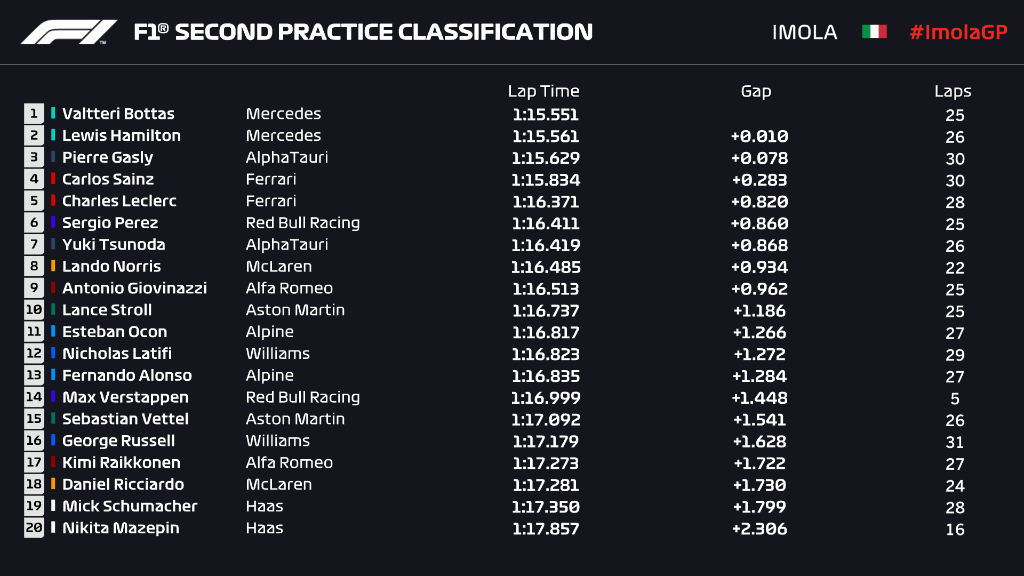