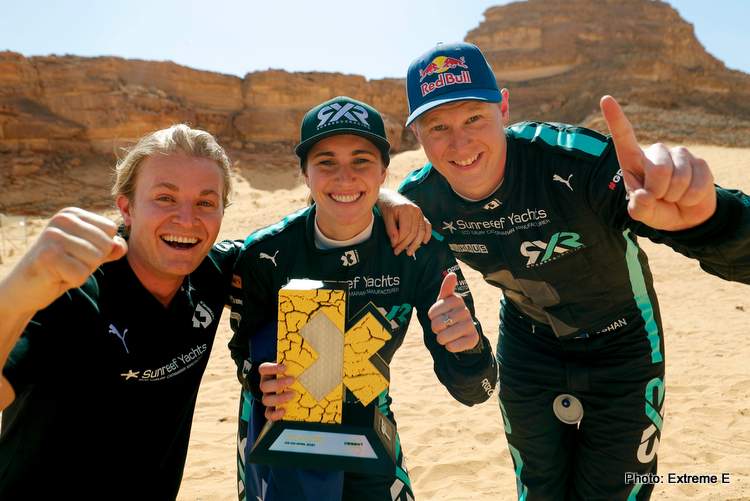 Rosberg X Racing team won the first round of the new Extreme E off-road series while Lewis Hamilton’s X44 outfit hit problems and finished third in a cloud of dust in the Saudi desert.

Andretti United, run by Michael Andretti and McLaren F1 boss Zak Brown, were second in the three-car final with Swede Timmy Hansen and Britain’s Catie Munnings 23.73 seconds off the pace.

The seven-time F1 world champion, who did not attend, sent a good luck message on Instagram before the race expressing his pride in what they had done so far.

Time trials had started on Saturday, around a sandy and rock-strewn track that also featured a plunging drop amid the dunes.

Kristoffersson made the best start in the final, leaving the others trailing in the dust, before Taylor put in a solid run after the handover to seal the win.

The pair had been fastest also in the semi-final when the identical ODYSSEY 21 cars went wheel to wheel for the first time.

There are five rounds ranging from locations in the Arctic to the Amazon and every team must field a male and female driver.

The next race is in Senegal in May. (Reporting by Alan Baldwin)

First Place for team #RXR 🏆. What an incredible experience this weekend has been. To be able to do what we love, while promoting an important message by racing in some of the most remote corners of the planet has been a dream come true. pic.twitter.com/TPPRE3lGUI