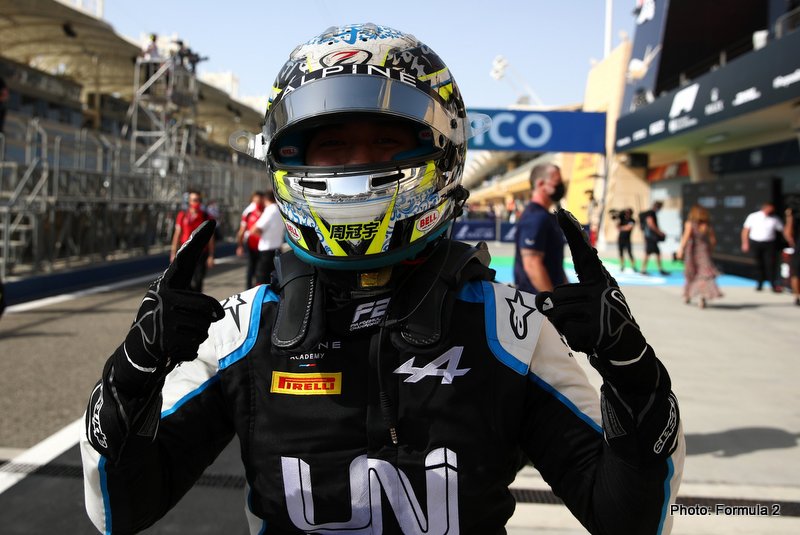 Guanyu Zhou won the first feature race of the Formula 2 season from pole position after a thrilling battle at the Bahrain International Circuit.

Varying strategies in the feature race provided a fascinating race where tyre choice proved crucial. A late safety car added to the strategic battle and the requirement for drivers to manage their tyres for the end.

Zhou came out on top ahead of Dan Ticktum and Liam Lawson, who both made good forward progress following safety car restarts.

Friday’s qualifying session set the grid which was headed by Zhou, Christian Lundgaard and Felipe Drugovich making up the top three. The feature race, at 32 laps long, includes a mandatory pitstop which promoted split strategies across the field.

Lundgaard got off smoothly with the soft tyres biting better than Zhou’s hards. Drugovich also, on softs managed to get ahead of Zhou on lap 1 just before the safety car was called on for Roy Nissany’s stricken DAMS, a nudge from behind from Robert Shwartzman enough to turn the Israeli around. Shwartzman was later handed a drive-through penalty as a result.

The early stages of the race showed the track was very much different to both races from Saturday. Plenty of sand and dust was being thrown up in the air, especially in Sector 1 making grip in the traction zones, especially on the exit of Turn 4, hard to find.

On the restart, Drugovich darted to the inside after a healthy slipstream behind Lundgaard, making a move for the lead at Turn 1. Remaining side by side, Drugovich would go wide at Turn 4 allowing Lundgaard to reclaim the lead at Turn 4. Race 2 winner Oscar Piastri, looking for another podium, took third place off of Zhou. Piastri wasn’t going to settle for just third, as he made forward progress again getting past Drugovich and began to hunt down leader Lundgaard.

Those on the hard tyres began to come back into the picture as the soft tyres faded after just ten laps. Piastri and Lundgaard continued Saturday’s battle of the Alpine Academy, bringing Drugovich into the picture and allowing the Hard tyre runners an opportunity to close the gap as the front runners battled. A headwind into Turn 1 gave the DRS extra impact allowing Piastri to relegate Lundgaard to second before the Dane switched to the hard compound next time by. His out-lap was hindered greatly as he was passed by Shwartzman, furthering Piastri’s advantage, but would still come out in front of Drugovich who reacted a lap later.

A virtual safety car was deployed just as Piastri exited the pits, a few seconds before Lundgaard caught him. The full safety car was then deployed to clear up Gianluca Petecof’s car within which the fire extinguisher was set off. Armstrong boxed from the lead, and rejoined in the same position ahead of Piastri, Richard Verschoor, Lundgaard and Drugovich.

Armstrong’s lead was short-lived as Piastri proved to be the last of the late-brakers to retake the lead as Verschoor on the soft tyres took second.  Those on the softs had a great advantage at the restart with Verschoor taking the lead from Piastri and building a gap.

Drugovich and Lundgaard were both handed 5-second time penalties for safety car infringements with ten laps to go. Lawson and Ticktum wouldn’t settle for a free pass at the end of the race, opting to pass Drugovich and set their eyes on Zhou and Piastri in the fight for second place.

The hard-to-soft strategy continued to prove itself the best option immediately after the safety car period as Zhou too was able to get ahead of Piastri and chase down Verschoor. However, that did not mean Piastri was necessarily out of the running with the chance of the soft tyres fading in the closing laps. And that was the case with six laps to go. The hard tyres came to life versus the soft, enabling Piastri to try and get back at Zhou.

One second covered the top-three just one lap later with Zhou getting past Verschoor for the lead, able to manage the soft tyres the better of the two. The Dutchman then faced pressure from Piastri who too was being closed in on by Ticktum and Lawson. Ticktum was all over the back of Piastri who again seemed to be struggling on the hard compound, before the pair bang wheels into turn 2 sending Piastri into a spin and a stall, deploying the VSC again.

The VSC was withdrawn on the penultimate lap and the battle for second was back on. Verschoor, unable to cope with Ticktum’s pressure locked-up three times in as many corners, falling down to fourth after another battle with Lawson.

The battles behind him allowed Guanyu Zhou to keep hold of the lead and win the race. A fast Ticktum would have to settle for second ahead of Lawson who took his second podium of the year. 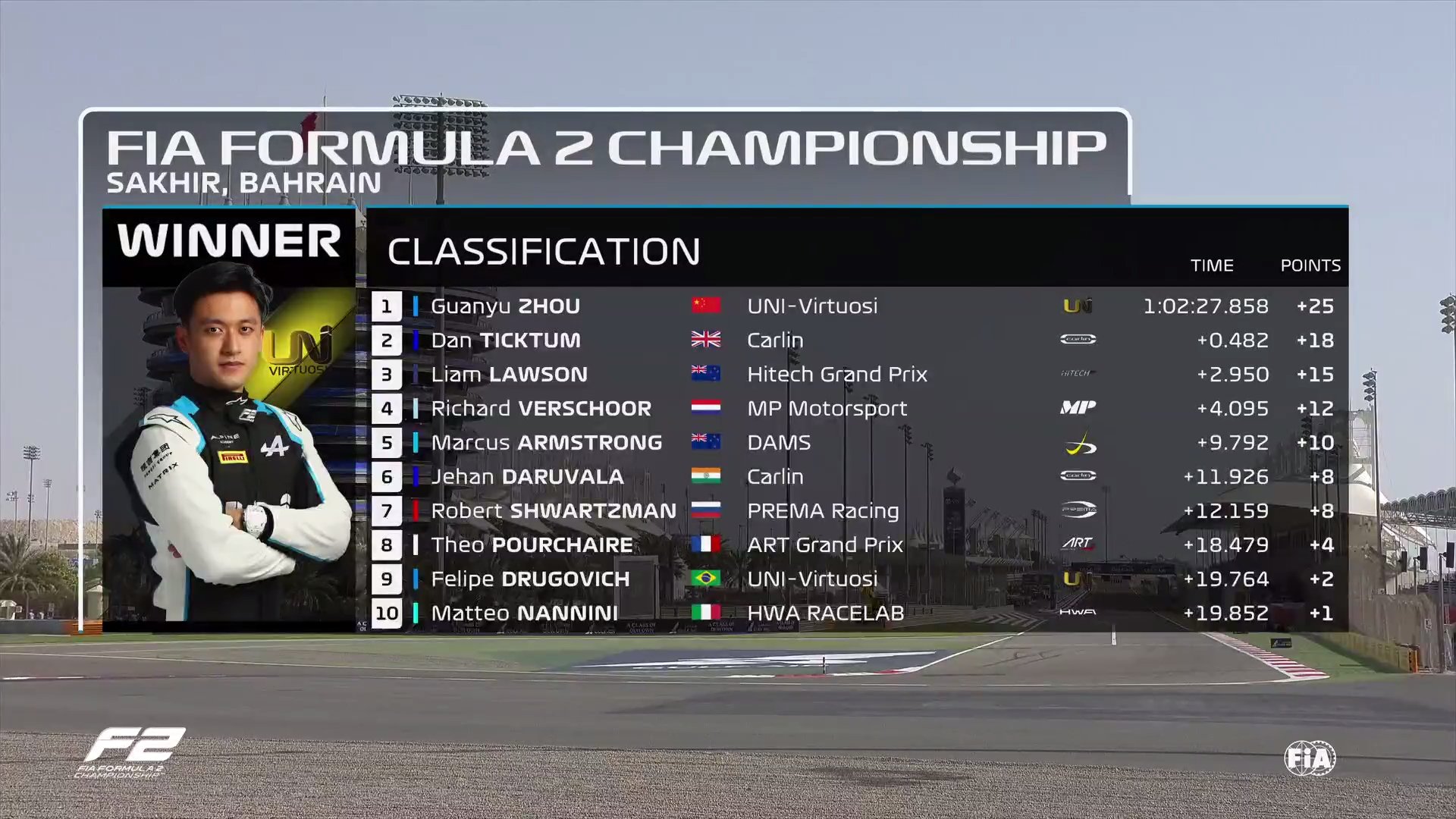