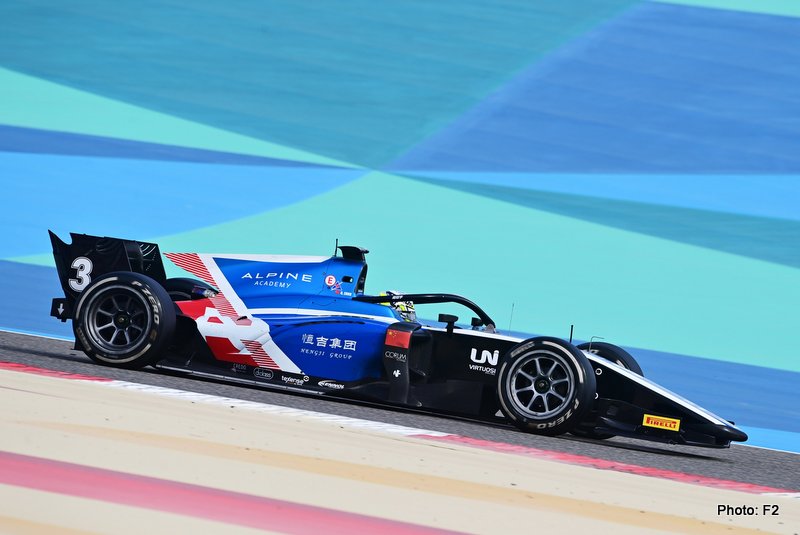 Guanyu Zhou has added to his impressive start to the 2021 Formula 2 season by qualifying on pole for Sunday’s feature race by the smallest of margins.

The change in weekend format means that Zhou will start the first Sprint Race of the season with tenth place qualifier David Beckmann jumping to the front row for Sprint 1.

Felipe Drugovich sat on top after the first runs with a 1:43.315, three-tenths ahead of ART Grand Prix’s Christian Lundgaard who lost a similar amount of time on the exit of the final corner.

Rookie’s looked to be getting caught out in the early stages by the handling of the car on a push lap on the exit of the esses at Turn 8, with Theo Pourchaire and Richard Verschoor both losing the rear early on.

Zhou, who has been touted as a title favourite this season, found himself out of sync with the rest of the field. With the whole track to himself and 15 minutes on the clock, the Chinese driver went top with a 1:43.293 went on top for a UNi-Virtuosi front-row lockout at the halfway stage despite a big slide on the exit of Turn 4.

As the sun continued to set, the track grew faster as expected. More grip, more downforce and more power became available while the clock ran down.

Track position also became a premium as the whole field exited the pitlane simultaneously with 9 minutes left on the clock.

Robert Shwartzman came to a standstill at the exit of the final corner, bringing out the red flag with 5-minutes to go, just before the final flying laps would get underway. His Prema, expected to be another one of the favourites for the FIA F2 title this season, lost power coming around Turns 14 and 15, unable to reach the pits and stopping short by the DRS board.

With 4 points on offer for pole position in Formula 2, the likes of Drugovich, Lundgaard and Daruvala would leave the pitlane with confidence to be able to capitalise on the evolution of the Sakhir circuit.

Lundgaard became the first driver to usurp Zhou, going fastest in all three sectors with a 1:42.851, going fastest by four and a half tenths. Rookies including Purchaire and Verschoor briefly flashed into the top five, disregarding any early worries.

Dan Ticktum, who was today confirmed by Williams to continue his role as a development driver for the team, managed to grasp fourth fastest.

UNi-Virtuosi were able to save their tyres with Drugovich and stagger Zhou to allow for a final push. Going green and purple in sectors 1 and 2 respectively, Zhou narrowly stole the pole position and four points from Lundgaard at the last gasp, going top ahead of Lundgaard by 0.003s.

However, at the end of the session was put under investigation for taking the chequered flag twice, putting his pole in jeopardy. In the post-qualifying press conference, Zhou said he didn’t expect to be penalised due to returning to the Grand Prix pitlane instead of the F2 pitlane. The stewards handed Zhou a reprimand for his actions but keeps his third-career F2 pole.