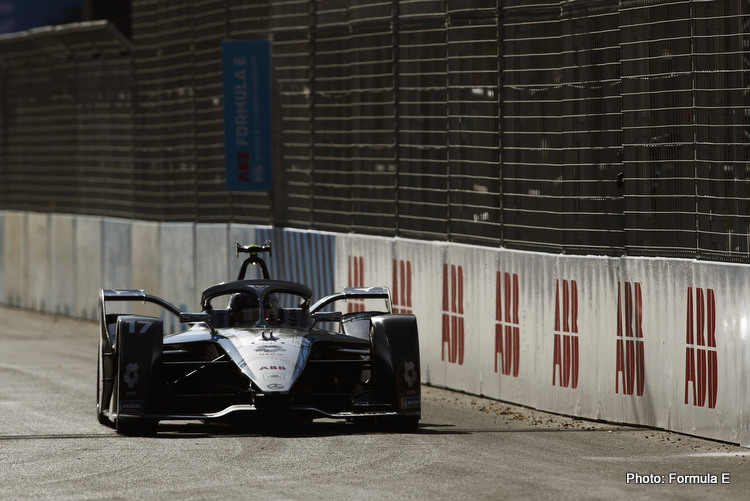 Mercedes EQ driver Nyck de Vries stormed to pole position by a margin of more than six tenths ahead of the Formula E opener in Diriyah, Saudi Arabia.

After setting the fastest time in group qualifying, the Dutchman clinched his first Formula E pole with a brilliant lap of 1.08.157 in super pole. Porsche driver Pascal Wehrlein was second, 0.664 seconds back, while Audi’s Rene Rast finished third.

The 2019 F2 champion has been the standout driver all weekend, topping both practice sessions, and now looks the favourite to bag a debut E-Prix victory and seal a second win in a row for Mercedes.

Edo Mortara came fourth for Venturi, although he was more than a second adrift of De Vries, with Alex Lynn of Mahindra fifth and Mitch Evans of Jaguar sixth. Andre Lotterer (Porsche), Sam Bird (Jaguar), Max Guenther (BMW) and Oliver Rowland (Nissan e.dams) made up the rest of the top 10.

Nico Muller and Nick Cassidy initially made it into super pole from group 4 but were penalised afterwards for setting their times under yellow flags. Sergio Sette Camara brought out the yellows after missing his braking point and going head-on into the wall.

De Vries’ teammate Stoffel Vandoorne was one of the many drivers to struggle out of group 1 and will start 15th, just ahead of Lucas Di Grassi in 16th and Sebastien Buemi in 17th.

With Vergne and Da Costa running closely together in group 1, the two DS Techeetah drivers almost tripped over each other and lost significant time, finishing around two seconds adrift of group qualifying leader De Vries.

Robin Frijns was unable to qualify due to damage sustained in FP2.