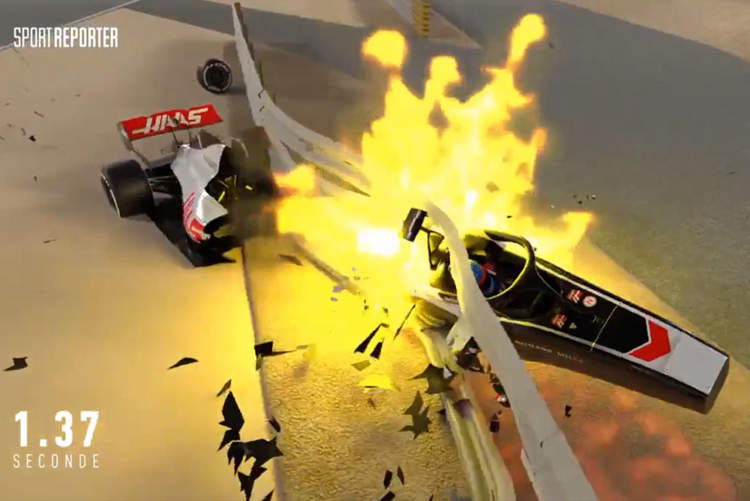 Twitter user Peke_Formula 1 has put together a remarkable video sequence of Romain Grosjean’s fiery crash during the first lap of the Sakhir Grand Prix.

Formula 1’s version of the ‘Miracle in the Desert‘ has been well covered by this site and media in general, but this latest video is worth a watch to witness the heaps of luck bestowed on the Haas driver that night.

In a nutshell, we are lucky to have Grosjean intact and alive thanks to safety elements that worked to perfection; from the Halo saving his decapitation to that astounding emergence from the flames just when we thought it was all over.

The harsh reality of what might have been has been aptly depicted in the computer-animated graphics put together by Canal Plus:

Have collected the animation clips into one video here (footage was placed amongst interview footage in the documentary).

The digital recreation of the impact was broadcast in a half-hour documentary on the French channel, in which they also speak to those closest to Grosjean, including his wife Marion Jolles, his race engineer and other Haas team members who were put through the visual ordeal along with millions of viewers live on TV.

Once a critic of the Halo, Grosjean has changed his tuned dramatically and declared: “Jules Bianchi saved my life thanks to the Halo. Yet I was firmly against its introduction. What an idiot I was…”

“Jules saved my life, he saved the life of other drivers. I will forever be grateful to him,” declared the Frenchman.

And finally, footage of Grosjean returning to the medical centre in the ambulance – with @JeanTodt arriving very soon and immediately thanking Dr Ian Roberts. pic.twitter.com/Z3MLuqp2dU