Grosjean: I saw death coming, I had to get out of there 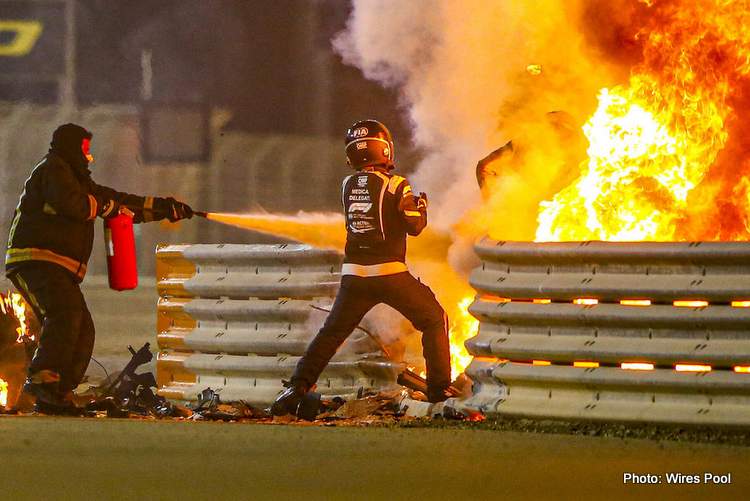 Romain Grosjean said he thought of Niki Lauda’s fiery crash and willed himself to get out of his burning Haas for the sake of his children, as he “saw death coming” after his accident in Sunday’s Bahrain Grand Prix.

“I saw my visor all orange, the flames around me, and the accident of Niki Lauda came to mind I didn’t want to end up like that,” the 34-year-old father of three told TF1 and LCI from his Bahrain hospital room in an interview reproduced on the French broadcasters’ websites.

“I had to get out, for my children. I saw death coming, I had no other option but to get out of there,” added Grosjean in the comments translated from French.

His Haas car careered off the track at high speed on the opening lap of the floodlit Bahrain Grand Prix. The car speared through the protective barriers lining the track in a 53G impact that split it in half and burst into flames.

The Frenchman, who had remained conscious throughout, miraculously extracted himself from the blazing wreckage before being helped to safety by fire marshals and FIA doctors.

Images of the burning car were evocative of a more dangerous era of Formula One such as when three-time world champion Lauda was administered the last rites after suffering severe burns and scorched lungs in an accident at the 1976 German Grand Prix.

The Austrian, who died last year at the age of 70, was back in his Ferrari just six weeks later, his wounds still bandaged and healing.

Grosjean suffered little more than burns to the top of his hands which he jokingly referred to in the interview as “Mickey Mouse” hands because of the bandages swaddling them.

He said the accident felt like a “rebirth” that would mark him for life.

Grosjean, who is set to be discharged from hospital on Wednesday after spending an extra night there, is set to leave Formula One next season. He will be replaced by Haas reserve Pietro Fittipaldi for the upcoming Sakhir Grand Prix.

However, Grosjean is determined to return for the season-ending Abu Dhabi race on Dec. 13 which is likely to be his swan song.

“Even though it is complicated for those close to me, it is a need for me to get back into a Formula One car, to see where I am, if I can continue to drive,” he said.