Brown: It is really a true team effort at McLaren 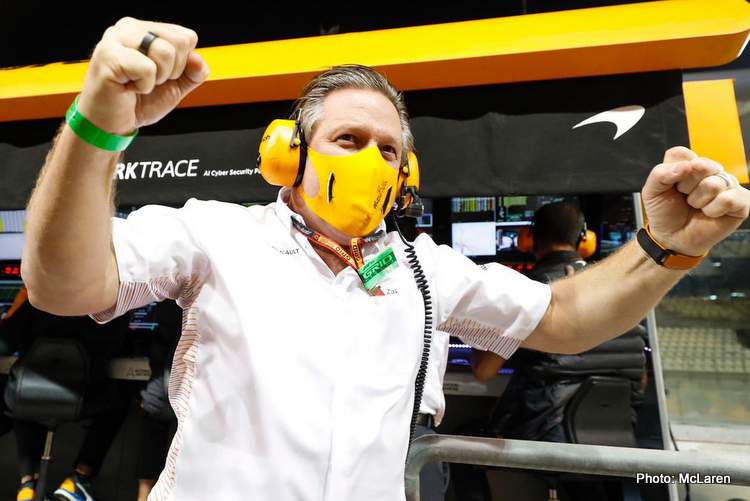 On the day that McLaren confirmed a $200-milliom financial boost, Lando Norris and Carlos Sainz did enough to ensure that the Zak Brown led outfit finished third in the 2020 Formula 1 constructors’ championship.

A consortium led by American-based investment group, MSP Sports Capital, will take a 15 per cent significant minority stakeholding in Britain’s most successful F1 team, rising to a maximum of 33 per cent by the end of 2022.

The news was revealed just hours before Lando and Carlos finished fifth and sixth respectively at the season-ending Abu Dhabi Grand Prix to move McLaren ahead of Racing Point in the team championship.

It ranks as McLaren’s best constructors’ finish since Lewis Hamilton left for Mercedes at the end of 2012.

McLaren, winners of 20 combined drivers’ and team titles, are on the ascendancy following a number of seasons in the doldrums. They finished a dismal ninth of 10 in the standings just three years ago.

Under huge pressure and critical scrutiny, Brown has faced a mammoth task to turn the second most successful F1 team around a in a relatively short space of time.

He said on a big night for his team, “It was a good day today. It has been a great year. It has been a really difficult season in the public spotlight some of our challenges.

“To bring the investment in this weekend, the job Lando and Carlos have done and the ladies and gents at the factory, it is really a true team effort.”

Norris, 21, who will be joined by Daniel Ricciardo at the resurgent team next year, said, “From a racing perspective finishing fifth and sixth is a good result and as a bonus we took third in the constructors. It gives everyone at the MTC a lot of encouragement and is a reward for all they have done.

“We want to close the gap to second and that will take a lot of work, but if we want to be championship winners we need to be determined and keep working hard. That’s the aim over the winter.”

MSP’s investment over a two-year period values McLaren at £560m. The racing team will continue to be based at its state-of-the-art headquarters in Woking, while Bahrain’s Mumtalakat holding company remains its majority shareholder.

The McLaren Group has endured a series of cash-flow problems in recent years, and placed staff on furlough following the outbreak of the coronavirus pandemic. Norris and Sainz also took temporary pay cuts.

The man Brown brought in from Porsche to steady the ship, Andreas Seidl was delighted, “We did it! P3 in the Constructors’ Championship. Congratulations and well done to the entire team, here in Abu Dhabi and back home at the MTC.

“Together with our drivers and our colleagues from Renault, they coped very well with the pressure to deliver a clean weekend and an excellent performance that helped us outscore our competitors. What an outstanding result at the end of a very challenging and difficult season.

“I’m very proud to be a member of the McLaren F1 team today. We asked a lot from our people this year, but amid the pandemic and a great deal of uncertainty everyone stayed focused on the job in hand.

“The team back home developed the car throughout the season with continuous updates from the factory, and at the track we kept improving the execution of our race weekends.

“Looking ahead, our results this season, together with our financial news today, provide a stable foundation on which we can build towards the goal of getting back to the front of Formula 1.

“At the same time, we’re realistic about where we stand and will continue on our journey. We’ve had a lot of assistance this year: the support of our fans and our partners has been crucial, as has the work done by the FIA and Formula 1 to ensure we could have a full, safe season.

“We thank them all. I’d also like to offer a special note of appreciation to our drivers, who both did a superb job this year. We’re looking forward to having Lando onboard for the future, and Carlos leaves with our best wishes for his next chapter in Formula 1.

“Also, a special thanks to Renault for their great support over the last three years,” added Seidl. (Additional Reporting: GP247)

It’s been a year of ups and downs, old tracks, new experiences and everything in between.

And it was a pleasure to experience it with this team. 🧡#AbuDhabiGP pic.twitter.com/DgLfiDpas1