Max Verstappen stunned Mercedes when he powered to pole position by 0.025s and as a result, will start the 2020 Abu Dhabi Grand Prix from top spot.

With it, the Red Bull driver broke Mercedes’ run of top spot starts this year and the first time the Champs will not start from pole at Yas Marina since 2013.

It was always going to be a shootout between Red Bull and Mercedes, the Blues showing their hand in FP3 with a one-two ahead of qualifying. Honda-power and the RB16 appears to be a handy combo on the manmade island.

In the end, it was super close, as Lewis Hamilton went tops with his last run, then teammate Valtteri Bottas went quicker to make it a Merc one-two very briefly until Max crossed the line to steal it from them when it mattered.

His first pole this season, the top three separated by less than a tenth of a second.

Max found one second between his table-topping best in FP3 and his mega final run in quali, while the Mercedes boys found a bit more than 1.5s but it was not enough. The Dutchman had it nailed.

However, it did come out of the blue, just as we were lulled into a much needed Bottas led Merc one-two headline, Max forced us all to change tack; the hint we saw of that pace was in FP3. But it appeared to have gone AWOL until he pulled the bunny out of the hat.

In the cockpit, Max was chuffed as he popped to the top, “Yes! Come on Boys! This feels good, this feels good. Well done boys, amazing.”

He continued afterwards, “Very happy with that. It was quite a tricky qualifying, there are so many corners where you can mistake but luckily everything came together on that final lap.

“It’s a long season for everyone, with a lot of races in a row. I think this was a good final qualifying for everyone in the team and for sure we are very happy with that.

“The whole season, behind and getting closer it’s a bit frustrating. But very, very pleased with today,” added the Red Bull driver after setting the stage for a cracking race.

Watch the awesome lap that powered @Max33Verstappen to pole at the #AbuDhabiGP 🚀🇦🇪 #ChargeOn 🤘 pic.twitter.com/zuI9rJEbeG

In comparison, Alex Albon was 0.325s shy of his teammate but still good for fifth.

Mercedes were robbed, they too might have thought it was only between the two black cars but they were ambushed and Valtteri denied much-needed redemption after his pasting from George Russell last Sunday.

He came close and said afterwards, “We saw in practice three that Red Bull and especially Max were pretty quick. The main issue is we couldn’t get the soft tyres to work properly.

“We have made some improvements. I don’t think we got 100% out of the single lap. With the lap itself I wasn’t fully happy with how everything went. The balance wasn’t perfect. Small margins and tomorrow is a new day.”

P3 – and a bit of a bumpy ride in qualifying for Lewis Hamilton 😬#AbuDhabiGP 🇦🇪 #F1 pic.twitter.com/yWnNPC3dkA

A week ago Lewis was in isolation recovering from COVID-19, today he delivered third on the grid.

He reported, “It’s definitely been a difficult weekend, just getting back into a rhythm. Even though it’s only a couple of weeks off it just felt like you’d lost that momentum and I’ve really struggled with the balance this weekend.

“But still I gave it my all and congratulations to Max. It’s a great way for him to seal a year of great performance. It’s always nice to seal first but it just makes it more exciting. I’m definitely excited to see how I can turn it around,” added Lewis.

Lando Norris delivered an outstanding lap to claim fourth for McLaren, ending three-tenths quicker than his Ferrari-bound teammate Carlos Sainz who will start his final race, with the Woking outfit, from sixth on the grid.

Daniil Kvyat, who may be driving his last Grand Prix in AlphaTauri colours has clearly been keeping his best for last, with seventh place this time out, better than teammate Pierre Gasly who was only good for tenth.

With Sakhir Grand Prix winner Sergio Perez doomed to back of the grid engine penalties, the Racing Point driver did not really factor in the proceedings, while teammate Lance Stroll did enough to claim eighth.

Next up, in ninth, was Charles Leclerc, eight tenths down on the top time, nevertheless a good effort by the Ferrari driver with a car that has done him no favours all season. Probably be glad when he can toss away the keys.

Sebastian Vettel last qualifying in Red was sad, which aptly sums up his final season with Ferrari. Again comprehensively slow, providing fodder for conspiracy theories. He will start the end of this chapter of his career from 13th…

Esteban Ocon edged Daniel Ricciardo in their final qualy duel, the pair will line up on the sixth row in 11 and 12th respectively after a below-par session for the French team, fresh from celebrating the Frenchman’s podium last Sunday the sweetspot eluded them thus far in Abu Dhabi.

Notably, less than a second separated the top ten on the timesheets at the end of Q3 today. Last year with Hamilton fastest, the gap was two seconds.

In closing, spare a thought for George Russell who a week earlier nearly claimed pole in Sakhir, then nearly won the race; today he was 18th and almost three seconds off the pace of the car he drove that night. Same engine, but a very different car and team.

Begging the obvious question: How would Lewis or Valtteri fare in the Williams?

Final word to Sky F1 pundit Martin Brundle, “I think that will be a bit of a shock to Mercedes. That’s the first time they haven’t been on pole here in the hybrid era.

“Absolute quality from Verstappen. That’s his dream qualifying session, he just kept finding time. As Mercedes were focusing on each other, he’s rocked up and stolen pole position. Brilliant stuff there for Red Bull and Max Verstappen.” 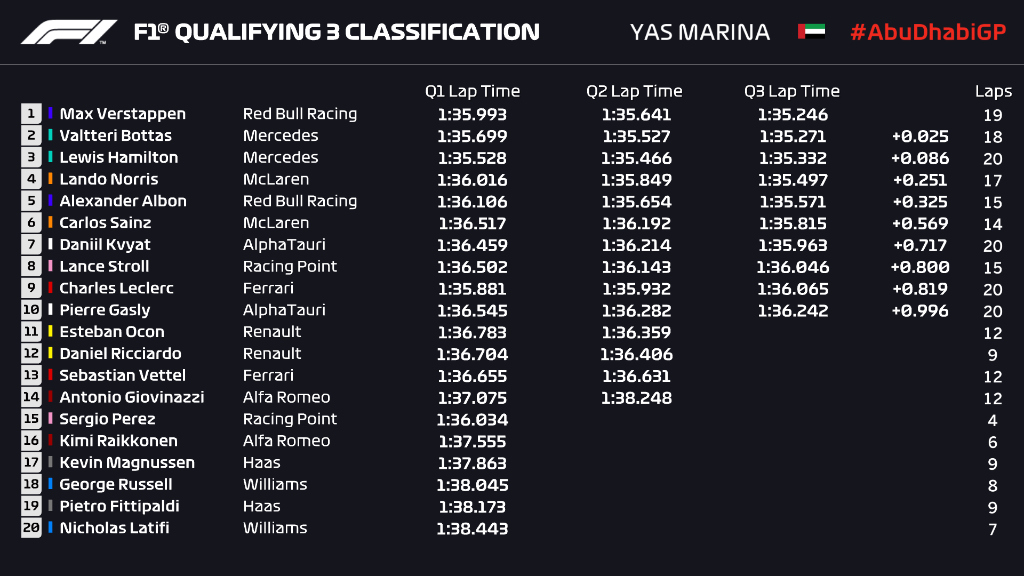