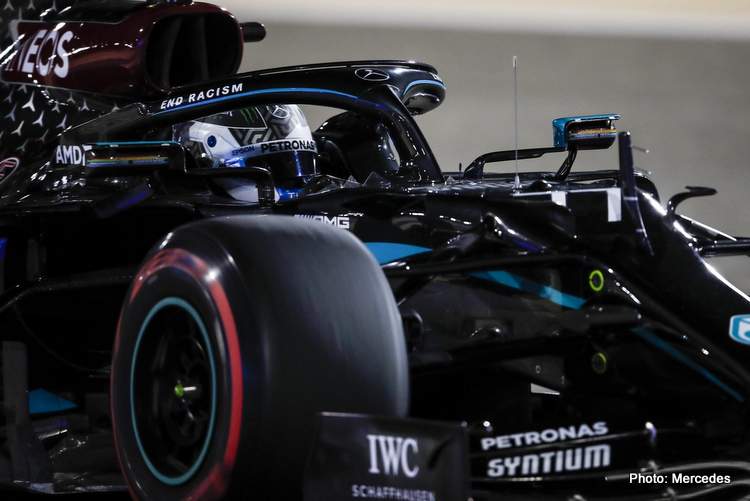 Valtteri Bottas will start the 2020 Sakhir Grand Prix from pole position, the Finn denying super-sub George Russell in a tense but excellent qualifying in Manama on Saturday evening.

It was a top spot start that Valtteri really needed to deliver, in the absence of regular teammate Lewis Hamilton, sidelined with Covid-19, because substitute George Russell signalled his intent with a dominant display on Friday.

He might not have shown it but clearly, there it was a brief relief for the Finn, “It wasn’t one of my best qualifyings, but I’m happy it was enough. Strategy-wise we’re in a good place as a team and good to see George locking out the front row as well.”

“I knew it was going to be close with George. I knew there was no room for a mistake for me. It is close, as expected at this track. It is a different feeling I have been all the years trying to chase Lewis. In a way, it is a different feeling. Pressure is a challenge; I am a racing driver so don’t want to lose to my team-mate.”

Credit to Russell for giving it his best shot in a car he only drove for four hours; pole would have been special but tomorrow the opportunity to go even one better from the front row of the grid – a fairytale ending remains for the impressive Englishman.

After his own fine performance on the night, George said, “Valtteri has pushed Lewis a huge amount in qualifying over the years. I think statistically there has only been a tenth between them and we all know how great Lewis is.

“Just to be right behind Valtteri, coming in last minute with two days of prep, I’m pleased. Let’s see what we can do tomorrow. “I’ve got nobody in front of me [from the front row] which I’ve not experienced for a long, long time.

It’s going to be tricky. Qualifying you give everything you’ve got, tomorrow you need a bit more control and finesse and I haven’t had the experience of that yet, but I’ll give it my all,” he added.

Max Verstappen was fractionally slower than the top two, but in the end his FP3 top time did not translate to qualifying pace or at least he was just short.

The Red Bull driver summed up, “From our side we had a good qualifying. It’s a very short lap, not many corners. I try and be as close as I can [to Mercedes], it was a bit closer than normal.

“Tomorrow we are starting on different tyres, it’s gonna be quite interesting how it’s gonna play out for us. Like I’ve said before, we have nothing to lose so we’ll see what we can do,” added Max.

Lap of the night was the mega effort by Ferrari driver Charles Leclerc who put the SF1000 where it doe not belong: P4! With no new tyres the Monegasque did not attempt a final run and his body language, as he stood at the Mercedes garage to watch his rivals stream out, for their final run.

Notably, Charles’ effort was over half a second better than teammate Sebastian Vettel could muster on the night, the German was doomed to Q2 exit and will start the race 13th.

Sergio Perez’s fine run of form continued, the Racing Point veteran topping Q2 before putting the pink car in fifth, bettering teammate Lance Stroll by four-tenths of a second, the Canadian was tenth.

All top ten drivers were separated by 0.823s.

Next up in sixth was Daniil Kvyat next best of the Honda quartet, who had a couple of tenths on Pierre Gasly when it mattered. The Frenchman good for ninth.

In the same stable, it was misery for Alex Albon who failed to make it out of Q2, admitting he gave it all after a lap that was only good for 12th.

Experience won the night for the Renault-powered posse, with Daniel Ricciardo seventh, once again fastest of the four, with Carlos Sainz eighth in the McLaren.

Renault’s Esteban Ocon was 11th, while Lando Norris in the other McLaren was first out for a final run and that was botched when he aborted after a messy build-up, compounded by going to early when it mattered. He will start 15th.

Debutants Jack Aitken (Williams) and Pietro Fittipaldi (Haas) were slower than their teammates. They will start their first Grand Prix on Sunday from 18th and 20th respectively.

Aitken, who has had a full season of F2 with Campos Racing, was less than a tenth down on teammate Nicolas Latifi while Fittipaldi, who has not raced all year, was six-tenths off of veteran Kevin Magnussen in the other Haas.

Finally, sad to see Kimi Raikkonen – who at 41 is eight years older than the next oldest rival on the 2020 grid – down in 19th sandwiched between two drivers making their F1 debut.

That the tired Finn, this time around nearly half a second slower than his unimpressive Alfa Romeo teammate, remains in the top flight next year is a travesty. His time is well past and his presence is a handbrake to fresh new talent. 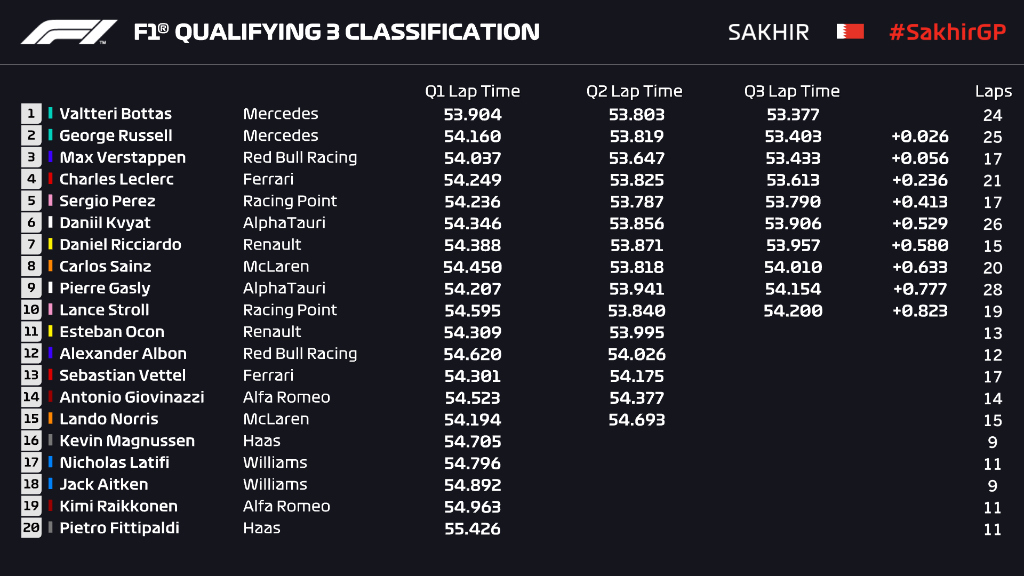 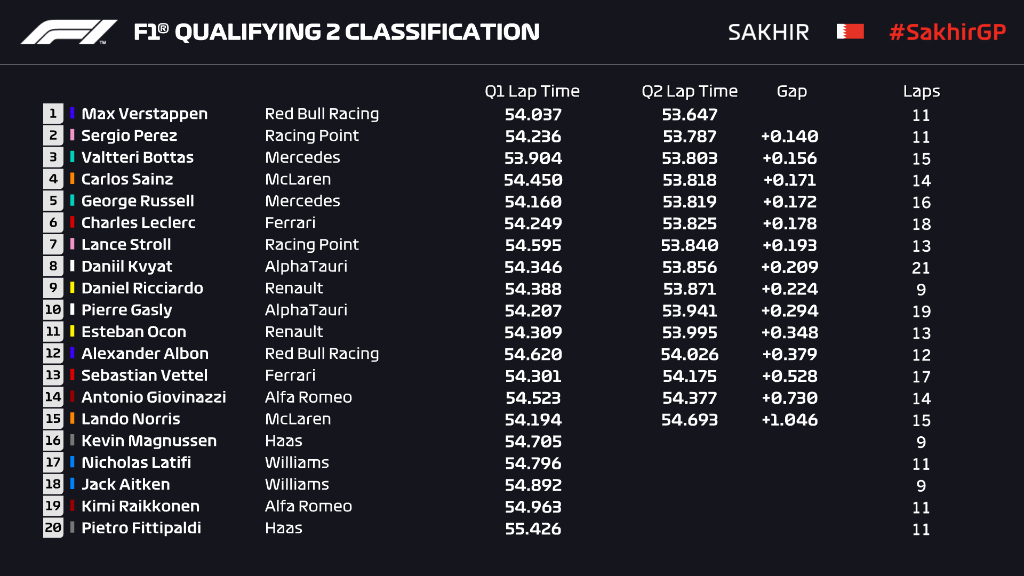 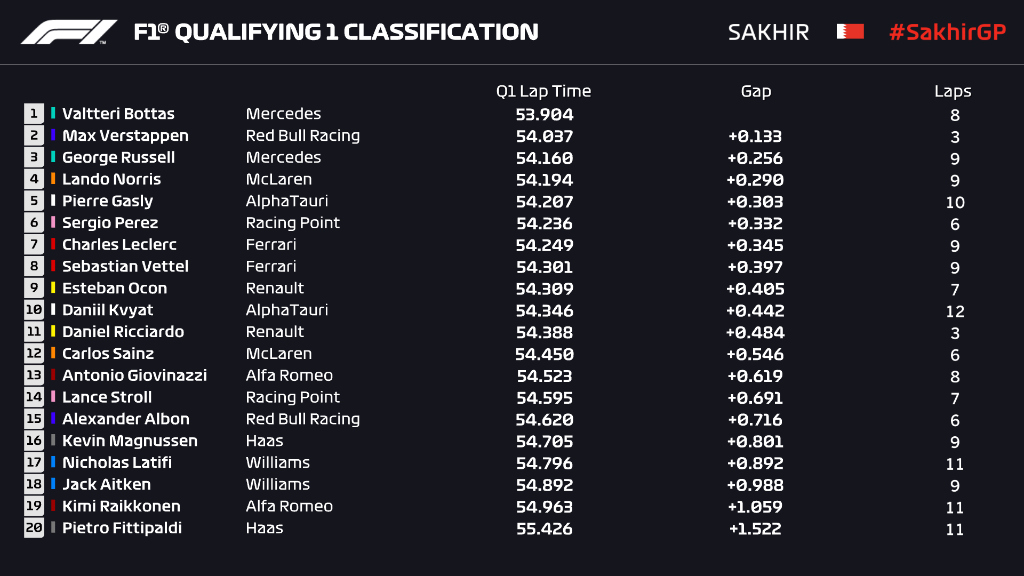