Vindication and lessons in wake of Grosjean crash 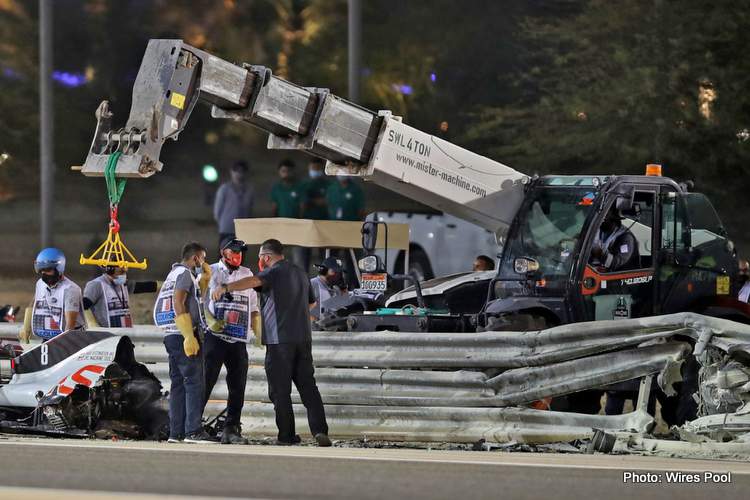 Romain Grosjean’s miraculous escape from a fiery crash in the Bahrain Grand Prix was a testament to Formula 1´s improved safety standards but it also emphasized why the sport cannot relent in its never-ending quest to reduce racing fatalities.

The Frenchman, who is set to be discharged from hospital on Tuesday, limped away from his Haas with little more than burns to his hands and not a broken bone in his body.

But the car, ripped in half by the 53G impact, broke through the protective safety barrier lining the floodlit Sakhir track and burst into flames, in images evocative of a more dangerous era for Formula One.

“The guardrail is not supposed to fail like that,” Ferrari´s four-times champion Sebastian Vettel, who like Grosjean is a director of drivers’ body the GPDA told Sky Sports F1.

“It´s good that the cars are safer than they used to be in the past but the guardrail shouldn´t fail and the car shouldn´t catch fire in that fashion.

“I don’t know what happened there. I think it´s difficult to say at this stage. The main thing is obviously that he got out.”

Formula 1 has improved safety hugely and fatalities, once common, are now rare.

The death last year of Formula 2 racer Anthoine Hubert at the Belgian Grand Prix was the first driver fatality at a Formula 1 race weekend since Ayrton Senna and Roland Ratzenberger were killed at the 1994 San Marino Grand Prix.

Jules Bianchi suffered serious head injuries in a crash at the Japanese Grand Prix in October 2014, dying from them in July the following year.

Formula 1, in 2018, introduced the halo cockpit protection device to protect drivers´ heads from large pieces of flying debris such as loose wheels.

On Sunday it was universally credited, including by Grosjean who was initially against its introduction, with saving his life.

The Frenchman, a father of three who is out of a drive and set to leave Formula 1 next year, was also protected by a new specification of fireproof overalls introduced this year which keep drivers safe for longer.

Still, with motorsport inherently dangerous, there is always more to learn.

The governing FIA said it would launch a complete investigation, which could take “weeks, if not months,” into the accident.

It will include a look at why the barrier split and the car caught fire.

“That process… will continue,” said the governing body´s Formula 1 race director Michael Masi. “You learn each and every time, something small, something large. But the process of learning is ongoing.”