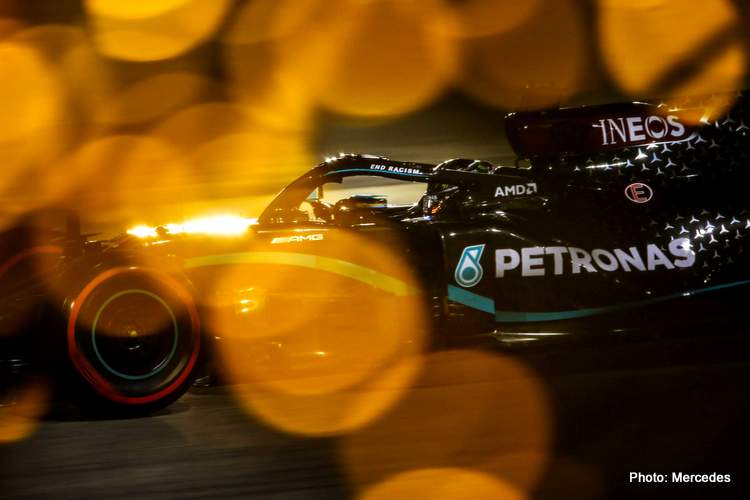 Max Verstappen signalled his intent to Mercedes by claiming top spot in the early afternoon FP3 session ahead of qualifying for the 2020 Bahrain Grand Prix, but when it mattered Lewis Hamilton who did the business and will start Sunday’s race from pole position as Mercedes turned up the wick to make it a one-two on the night.

Decided under floodlights, Lewis set a marker with his first Q3 run which was a tenth up on Max Verstappen and three tenths better than Valtteri Bottas.

Hamilton said afterwards, “To be out here, in Bahrain, and be able to put a lap like that together – I came today and said ‘let’s just have fun and enjoy it.’ That’s the most important thing and with the pressure off, it’s a bit of a release to drive like I did.

“I’m on the ragged edge and it’s all about trying to find that perfect balance – you want your cake and eat it. I thought the lap started really well. I can talk you through a lap but there’s always just a little bit here and there. Otherwise it was a clean lap. I was happy with it.”

On his final flyer the World Champion set three purples to claim top spot start for a tenth time this season by three 0.289s over his teammate. Max was third.

The Dutchman summed up, “That was pretty good. Just lacking a bit of rear grip in the lower speed corners. Overall I think it was a decent qualifying and let’s see how it goes in the race tomorrow because it’s very hard on tyres.

“I definitely think Mercedes picked up their pace today, so even tomorrow will be hard to beat them but we have different tyres available, so let’s see if that works to our advantage or not.

“I hope it will be an exciting race. I just try to focus on myself and stay close to the Mercedes cars. I’ll see if somebody can follow us.”

Alex Albon bounced back from his heavy FP2 crash, to take fourth place albeit six tenths down on the #33 Red Bull.

It was a bittersweet result for Racing Point with Sergio Perez, again making a huge case to stay in F1 claiming, claiming fifth place and Best of the Rest. In contrast, Lance Stroll (pole two weeks ago in Turkey) failed to make it out of Q2 and will start 13th.

McLaren’s Lando Norris was ninth fastest, while his teammate Carlos Sainz suffered a mechanical issue while braking for T1 which forced him to stop out on track; he will start 15th.

AlphaTauri’s Pierre Gasly was eighth fastest, a tenth and a bit up on teammate Daniil Kvyat making it Honda with four cars in the top ten.

Just outside of that were the Ferrari duo, Sebastian Vettel a couple of hundredths faster than Charles Leclerc in the other Red car, provisionally, the two will line-up side-by-side on row six.

Notably, George Russell wrestled the Williams brick to 14th on the grid, another driver making a call for better pastures to show his undeniable talent.

Maybe when the Bottas-experiment ends, Merc may take a look at what they have for the future and realise without Lewis they have no real deal to inherit the baton. On occasions such as this, it’s time for Toto Wolff to consider George for that role – not only for his mighty team but F1 as a whole. 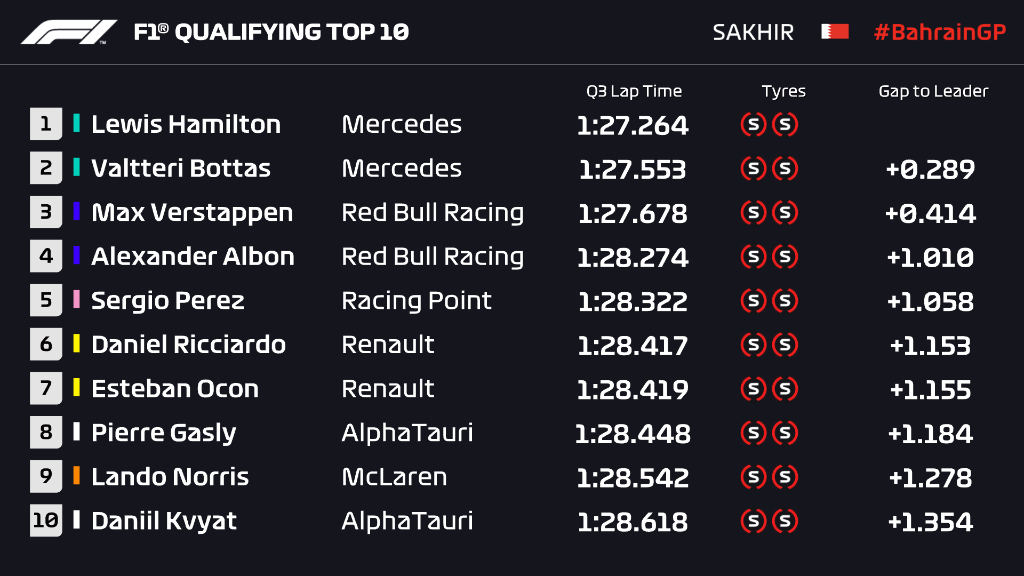 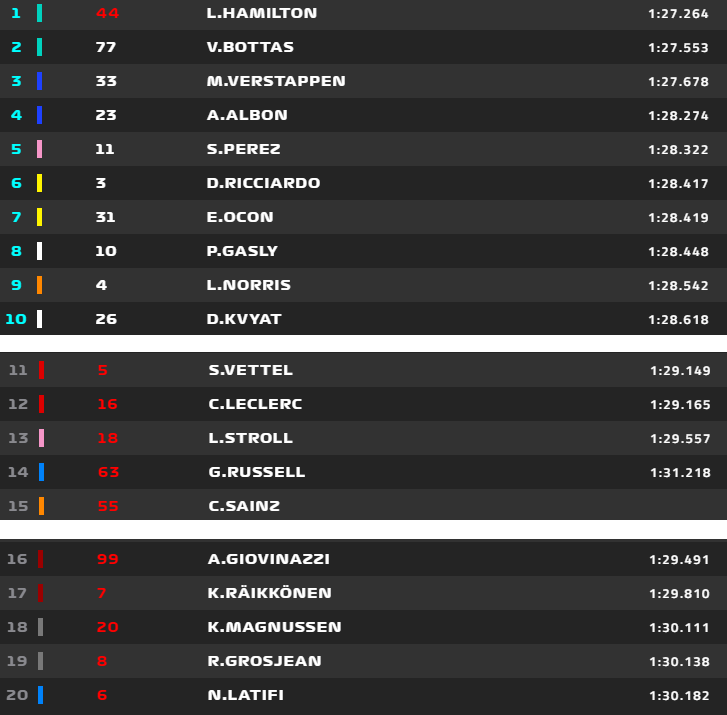