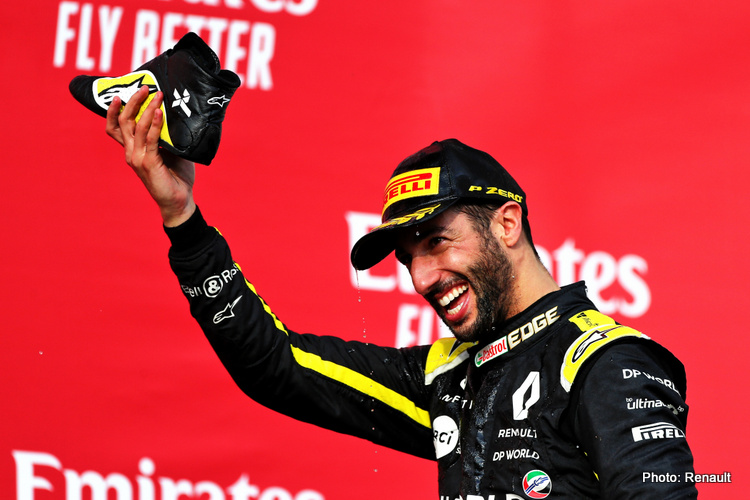 Daniel Ricciardo will be missed next season at Renault as much for his personality off-track as his results on it, says the team’s executive director Marcin Budkowski.

One of the standout performers of the 2020 Formula 1 season, Ricciardo has earned Renault’s first two podiums since its return as a works team in 2016, helping out the Enstone outfit in contention for third in the constructor’s championship in the progress.

However, it was announced before the season that he would be departing next year for rivals McLaren, with Budkowski suggesting they are getting a very special driver.

“He’s at the top of his form,” he told reporters at the Turkish Grand Prix. “He’s driving exceptionally well.

“That shows in the team results, but also in his personal results, so of course we will miss him but we will also miss the character.

“He’s a smiley, engaging character, a pleasure to work with him. Daniel walks in the room and suddenly the mood in the room picks up because his smile and his enthusiasm is infectious.”

As for the fight for third, Budkowski suggested the team’s ability to compete with the likes of Racing Point, McLaren and Ferrari was encouraging regardless of the eventual result.

“The fight for third depends a little bit on the weekend and on the conditions,” he explained. “Certainly it’s a very very tight fight. We’ve lost valuable points to reliability the last few races which is something we’re not happy about and we are working very hard to get that back under control because that could be the deciding the factor.

“It’s good to have a fast car but you need to have a reliable car to score the points. For the good run, I think it’s a combination. I think the Renault car this year is clearly a better car than we had last year. We addressed some of the major weaknesses we had on last year’s car. We’ve made good progress during the season, we’ve made good upgrades.

“That’s obviously pushed us forward in the pecking order, but we’ve also understood the car better and I wouldn’t call it a breakthrough but it was progressive learning and understanding of the car and therefore in parallel, you understand the car better and you improve it and when all these things come together you start to perform better.”