Michael Schumacher: Records are there to be broken 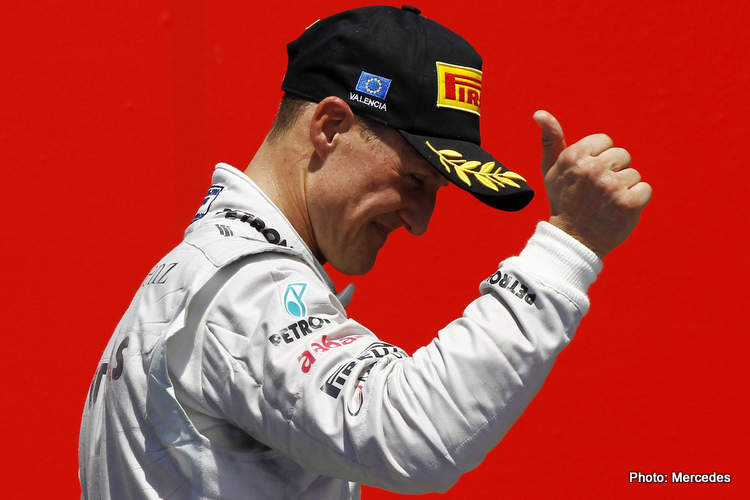 But the massive feat would come as no surprise to the German legend the who, a dozen years ago, predicted one day his own incredible records would be matched and broken one day, Sunday in Istanbul was that day.

At the time, not many would believe him, as F1 fans or anyone involved im motorsport believed those records would stand forever.

In 2008, during an interview with BBC Sport, the Michael was asked if he felt his records would be broken one day, he replied, “I would say, absolutely, yes. Nobody thought, even me, that I could beat Fangio. Then I did. Records are there to be beaten.”

Prophetically he added, “I’m quite relaxed that one day it will happen, whether it’s Lewis, whether it’s Massa, Vettel or whoever. It might be someone of the current or of the future that could or will do it. But I’ve got no problem about it.”

Hamilton famously replaced Schumacher at Mercedes, the veteran bringing an end to the second chapter of his career at the end of 2012 to make room for the Briton, the young shooting-star of the time.

When Hamilton made his Formula 1 debut in 2007 Schumacher had retired from Ferrari to make way for Kimi Raikkonen.

Also in 2008, Schumi said of Lewis – a year and a bit into his career in F1 – in an interview with ITV, “When you think about what he has done in such a short time, just arriving and competing last year with Alonso [McLaren 2007] and being very often quicker, that talks for itself.

“Is he the best? Is he not the best? Is he better than Felipe Massa or not? You look at the circumstances; it is not always very straightforward or clear to understand from the outside.”

Fast forward a dozen years and Schumi is still around but sadly no longer for public consumption, however, inevitably one wonders what the great F1 legend would say to Lewis on this occasion.

Guaranteed, “Records are there to be beaten” would be in there!

“Can someone like Lewis go on and get seven world titles?”

Michael Schumacher was asked the question back in 2013…#F1 pic.twitter.com/1ji6WX4hk6