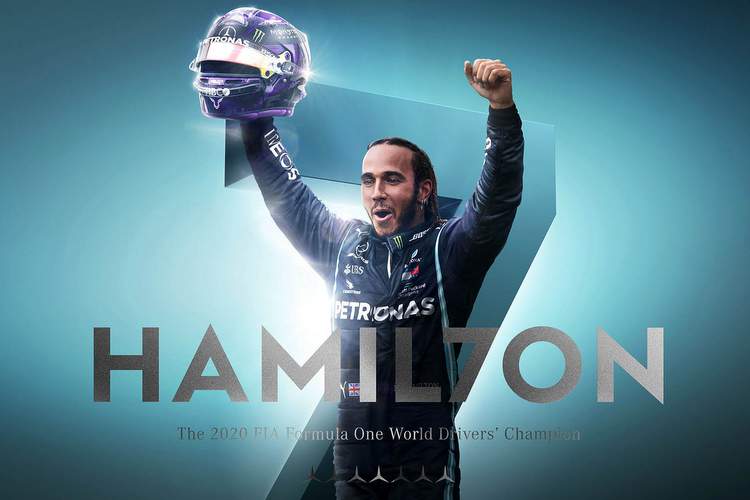 It was fitting that Lewis Hamilton earned his record-equalling seventh Formula 1 world championship with the best drive of the season and one of his best ever, his tenth win of a campaign packed with stellar performances.

On Sunday, starting sixth on the grid, the 35-year-old delivered an exhibition in tyre management and his mastery of the tricky, wet conditions was evident as he sealed his 94th win and a seventh title.

While his teammate Valtteri Bottas spun five times on a treacherous track, Lewis managed to keep his intermediate tyres intact for 52 laps and advance gradually while his rivals around him tripped up or simply could not match his pace.

The emotions spill out, as @LewisHamilton conquers the world for the seventh time ❤️👑#TurkishGP 🇹🇷 #F1 pic.twitter.com/KzqVKysLqL

Overall, he has rarely been challenged this season, with Red Bull and Ferrari unable to compete with Mercedes and Bottas kept at arm’s length throughout.

The Finn can put up a good fight on Saturdays and ran Lewis close on a number of occasions, even if he only outqualified him four times.

However, on Sunday the gap between the two drivers was stark, and Lewis almost always came out on top. Much like it has been since Nico Rosberg departed the team at the end of 2016.

Nine pole positions and 10 wins from 14 rounds tell the story of a driver who had this title under control since the start of pre-season testing. The onus remains on his rivals to up their game, otherwise it is likely that we will see a repeat of these results going forward.

The dominant qualifying performance in the wet at the Styrian Grand Prix was a highlight, while his display at Portimao to seal win number 92 was perhaps the greatest example of his advantage over Bottas.

Once the shine of this dramatic win at a wet Istanbul Park has worn off though, this title win will perhaps be remembered as one of his most straightforward and no doubt, the slights on his talent will continue.

However, if nothing else, Lewis has shown a relentless ability to perform at his very best and eke as much out of the car as he can.

This season was also significant because of the backdrop that surrounded it, with the coronavirus and social justice issues always present.

Throughout, Lewis has been steadfast in support of the Black Lives Matter movement, never relenting the pressure and willing to do things that may make some onlookers uncomfortable.

The British driver is not afraid to put his head above the parapet and his drive for self-improvement, in and out of the cockpit, is one of his greatest strengths.

We at GRANDPRIX247 stand and applaud the Greatest Driver of Our Time.: Lewis Carl Davidson Hamilton.

Hamilton secured his seventh Formula One world championship at the Turkish Grand Prix on Sunday, and with it matching Michael Schumacher’s record tally of titles at the pinnacle of the sport.

The Mercedes driver, with a record 94 wins, is the most successful F1 driver of all time. The following details his progression to the 2020 title.-

Bottas won from pole position, with a time penalty dropping Hamilton to fourth. There were only 11 finishers, with Norris setting fastest lap. An error in qualifying dropped Hamilton from the front row to fifth.

Hamilton won again from pole, and for a record eighth time in Hungary, to wrest the championship lead from Bottas who finished third after a botched start. Verstappen was second, despite crashing on the way to the grid.

Hamilton won from pole, his record seventh British victory, but crossed the line on three wheels after a last lap puncture. Verstappen was second but took fastest lap. Leclerc was third. Bottas finished 11th after a late puncture when second.

Another win from pole for Hamilton, his fourth of the season. Bottas started on the front row but dropped to third at the start.

Hamilton started on pole and led every lap to beat Schumacher’s F1 record of 24,244km in the lead. Bottas finished second, his best result at Spa.

Hamilton’s 94th pole but he finished seventh with the fastest lap (his 50th). The Briton led but had to serve a 10 second stop/go penalty for a safety car infringement. Bottas started on the front row, made a poor start and finished fifth.

Hamilton’s 90th win and sixth of the season came from pole. He also set the fastest lap and took a record 222nd points finish. Bottas was second.

Bottas celebrated his second win of the season and set the fastest lap. Hamilton started on pole but collected two five second penalties for pre-race practice start infringements. The race was the Briton’s 150th for Mercedes.

Hamilton started on pole and took a record 92nd win as well as the fastest lap. The Briton won by 25.592 seconds, his biggest margin of the year. Bottas was second.

Mercedes clinched the constructors’ title and made sure of the drivers’ title — with Bottas now Hamilton’s only rival — for a record seventh year in a row. Bottas started on pole but collected debris on lap two and damaged his car. Hamilton took his ninth win of the season and 93rd of his career.