Norris: I apologised to Lewis himself 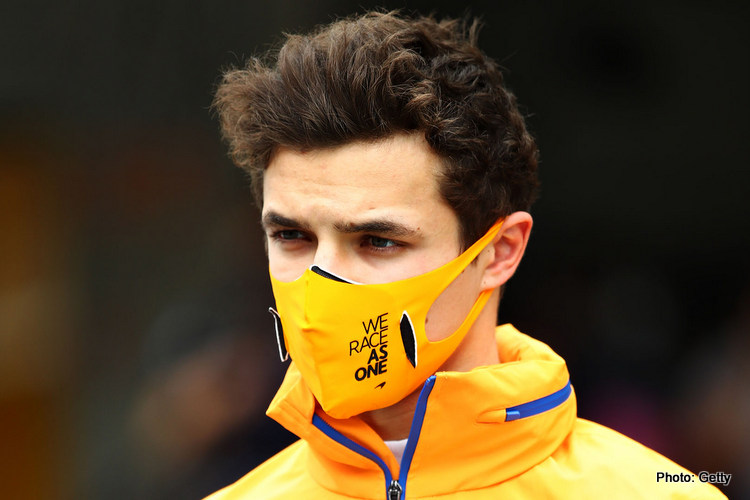 McLaren’s Lando Norris has further elaborated on the apology he made on social media this week, explaining he did not mean to denigrate the achievements of Lewis Hamilton.

Taking to Twitter on Tuesday, Norris said he hadn’t “shown the respect I should have to certain people” in comments he made after last Sunday’s Portuguese Grand Prix, but did not explicitly state who those people were.

As such, it could have been interpreted as a mea culpa either for his statement that Hamilton’s record “doesn’t mean anything to me” as the Mercedes driver is “in a car which should win every race”, or for labelling Stroll as a driver who “doesn’t learn from anything he does”, or both.

Asked about the post ahead of this weekend’s Emilia-Romagna GP, Norris explained he was referring to “the comments about Lewis, and him reaching his 92 wins”.

Expanding further, Norris stressed that he “had a lot of respect” for Hamilton and “just didn’t choose the right words to put that into context”, before revealing he had approached his fellow Briton to clear the air.

“I apologised, but I also apologised to Lewis himself – I messaged him. I don’t know if you knew at the time but I never mean to say something like that in a bad way, or put any bad light on him at all, and I respect everything he’s done to achieve what he’s done.

“It’s incredible no matter what. It was just the way I put it was not the way I wanted to put it across. So, I said what I said, I apologised, and I’ve just got to move on.”

Norris also conceded he had “passed [the line] twice with my own opinion” in Portugal, potentially referring to his Stroll comment, but suggested he was more displeased with the wording he had used than the comment itself.

“It’s always not easy,” he said. “I guess my first apology was more for the language I used more than anything.

“Not everything I said I apologised for, just more the specific wording of what I said.

“But it’s not easy, everything can get taken out of context in some way and especially now in 2020 you have to be careful with what you think.

“And as much as I like voicing my own opinion, and that’s what I did in a lot of ways, I maybe didn’t pick the right wording for what I said.

“I probably will make a mistake at some point in the future and say the wrong thing again, but I never mean it and I’ll try to do the right thing.”