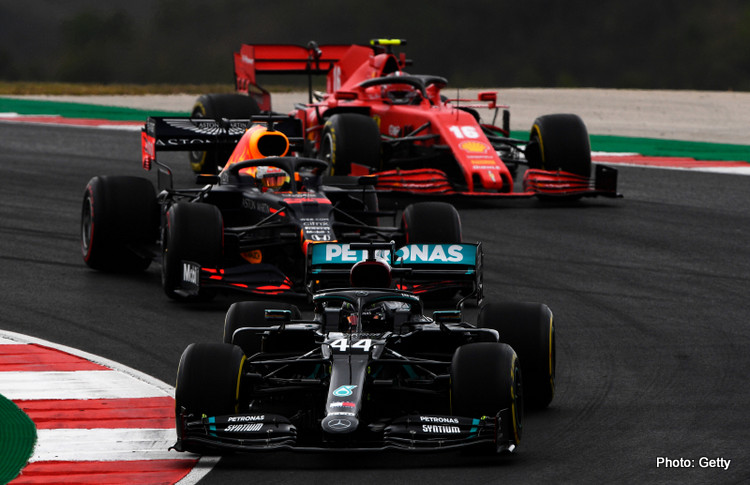 Lewis Hamilton earned his record 92nd race win in Formula 1 at the Algarve Circuit on Sunday in the first Portuguese Grand Prix since 1996.

The six-time world champion took his ninth pole position of the year on Saturday before recovering from a slow start to win from teammate Valtteri Bottas by a 25-second margin.

Max Verstappen was third, ahead of the impressive Charles Leclerc in fourth and the ever impressive Pierre Gasly in fifth.

Snatched pole position right at the death having been behind all through practice, before recovering brilliantly from a slow start on cold tyres. His margin over Bottas in race trim was crushing.

As he often is, Bottas was so close to snatching pole but unable to stay with Hamilton on Sunday. Must be losing hope by the week about his chances of matching his record-holding teammate.

Achieved the best result possible in his Red Bull once again, but it was not quite as smooth a weekend as possible. Collided with both Racing Points and appears increasingly frustrated with the relative strength of the Mercedes.

A fantastic weekend from the Monegasque driver, who is driving the wheels off of his Ferrari. The qualifying lap was stunning, while his race pace was much improved on recent outings.

Another great drive from the Frenchman who just looks so hooked up in that Alpha Tauri car. Pulled off some nice moves in the race and made the sub-optimal strategy after starting on the soft tyres work.

Made a fantastic start to the race on the soft tyres to lead after the first two laps, but suffered as the strategy played out later in the race. Nonetheless, a good performance.

Qualified fifth and then recovered really well after tangling with Verstappen on the opening lap. A timely reminder for the teams considering his services about his tyre managing qualities.

Slightly off the pace in qualifying but made up for it with a 50-plus lap run on the medium tyres to earn a points finish and beat his teammate.

Had a spin in qualifying which compromised him in Q3 and was then hampered by an early stop. Did well to hold on for a point though.

Still cut adrift from Leclerc, but this was better from the German. Was right on the back of the midfield battle until the very end of the race, which marks a definite improvement.

Perhaps one of the greatest first laps in Formula 1 history, Raikkonen was unfortunate not to come away with a point.

Was the familiar half a second behind Verstappen, before really struggling in the race and going backwards. According to his team, he has just one race to save his Red Bull Racing career.

Unfortunate to have had his race ruined by Lance Stroll, who collided with him and forced Norris into the pits.

Continues to impress in qualifying and made it into Q2 for the seventh time this season. Tried hard in the race and rose as high as seventh, but this car does not quite have the pace to finish in the points.

An altogether underwhelming performance all weekend from the Italian, who was outqualified by his teammate and then unable to make progress in the race.

In the first race since his departure from Haas was announced, it is easy to see why this is probably a mutually beneficial decision. Drove well and did his best, but this car has not been good enough for the last two seasons.

A similar situation to that with Magnussen, Grosjean was pretty emphatic in his assessment of the car at his disposal. Could not repeat the heroics of last weekend.

Another weekend where he was thoroughly outshone by Russell. Continues to be a steady presence, but needs to find a few tenths.

A real shocker for the Russian, who finished 14 places behind his teammate Gasly. Looks almost certain to lose his drive this off-season.

His worst weekend of the year, Stroll had an unnecessary collision with Verstappen in free practice before being involved in a similar one during the race with Norris that essentially ended their chances of earning points.