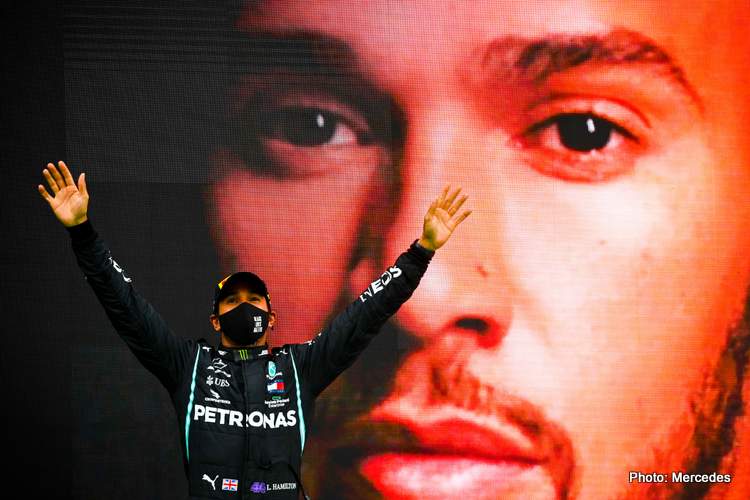 Lewis Hamilton has etched his name Formula 1 history as the most successful driver of all time in terms of victories, powering to his 92nd win at the 2020 Portuguese Grand Prix, usurping Michael Schumacher’s once seemingly unattainable record.

And the soon to be seven times F1 World Champion, did it in style on an intriguing afternoon at a gloomy Portimao circuit that delivered a tense start which fizzled into yet another dominant display by the Briton.

The race start was hectic with Lewis managing to stay ahead of the organised chaos behind him, teammate Valtteri Bottas tucked in behind and swept past his teammate in a rare move of defiance to take an early lead only to find Carlos Sainz taking advantage of the tiff between the black cars.

The McLaren’s lead lasted half a dozen laps before Valtteri took squeezed past and Lewis followed suit in what was the most exciting opening to a Grand Prix in ages.

The stalemate remained at the front with the #77 car stalked by #44, until lap 20 when Lewis attacked to snatch the lead where he remained to claim win 92 by the biggest margin so far this year.

Before that, the absurdity of Mercedes dominance with Lewis at the helm was clearly illustrated on the day as he minced Valtteri; by lap 31 the lead was up to 7.7 seconds. By lap 40 the lead was a controlled ten seconds and he had lapped everyone up to third place.

Lewis has his hands on the title, he now leads the championship by 77 points (spot the irony!) ahead of Valtteri with five races remaining. But in reality, it is all over no matter what.

Emotional and jubilant, Lewis savoured the moment in parc free in front of an adoring Portuguese crowd, “Today was tough, it was all about temperatures. That was something with the setup, I pre-empted. We got some spitting right at the start, I had a good start but then into Turn 7 had a huge oversteer moment.

“I should have tried to defend from Valtteri but I thought I’d come back later on, and that was what I was able to do. I could never have dreamed of being where I am today.

“I didn’t have a magic ball when I chose to come to this team and partner with great people, but here I am and what I can tell you is I’m trying to make the most of it every single day.

“It’s going to take some time to sink in. I was still pushing flat out coming across the line, I’m still very much in race mode mentally. I can’t find the right words at the moment,” added Lewis.

Bottas had no answer and is unlikely to ever have for one of the greatest drivers our sport has had the privilege of witnessing. Another one for the history books of our sport.

The Finn said after the race, “The start was the high point for me today, after that, I didn’t match the pace of Lewis. I was trying, but couldn’t go any faster. I could feel the vibration with the medium tyre, doing a stint with the soft could have been risky.

“I decided to settle for the hard tyre and take the points. But I don’t think tyre management was the issue today, it was more the pace. I don’t have the answer at the moment,” lamented Valtteri.

Max Verstappen was third, overcoming a torrid start to play second fiddle to the Mercedes. It was a scrappy opening lap that compromised the Dutchman’s race and included a collision with the Racing Point of Sergio Perez.

By lap eight, enraged-Max became the Max we know as he clawed his way back to third where he remained. His opening stint ended his hopes on anything other than the bottom step of the podium.

He said in parc ferme, “It was very low grip at the start. I tried to stay out of trouble but had a touch with Sergio Perez. He didn’t give me enough space so he took himself out. I did my own race after that.

“Once on the medium tyre I had good pace but the gap was already so big, we couldn’t do anything. On a hard tyre it was not amazing, the medium definitely was the best, but if we had started on the medium we would have lost time on the hards, so overall the finish was where we deserved.”

In sharp contrast, his teammate Alex Albon made another case for a demotion with a downright poor display which saw him lapped by the sister car on his way to a woeful 12th place.

Charles Leclerc saved face for Ferrari yet again overdelivering the SF1000 to claim fourth place, while Sebastian Vettel spent his afternoon in midfield obscurity to claim the final point for tenth.

A wild start and a memorable ending 🍿

Adding insult to injury for Albon, and making a farce of the Red Bull organisation, was the stellar drive on the day by AlphaTauri’s Pierre Gasly making the strongest case ever for a return to the Red Bull senior team after a sensational race to fifth place.

The Frenchman, winner of the Italian Grand Prix last month, ticked all the boxes in Portimao. What Red Bull do next will be interesting.

Sainz’s stellar cameo was shortlived but gave us a glimpse of what drivers can do with good cars in their hands. The McLaren was able to switch on the softs better than their rivals early on in the race, enabling the Spaniard’s genius to shine through for those eight laps.

But thereafter the graft was out of the limelight as Carlos soldiered on to claim a well-earned sixth place.

Lando Norris was out of sorts on the day, given a penalty for track limit infractions which compromised his afternoon, 13th was his disappointing reward.

Driver of the Day went to Sergio Perez, and rightfully so. The Racing Point driver came off second best in the collision with Max’s Red Bull, relegating the Mexican to stone last. Whereupon he delivered the kind of performance that makes him one fo the most respected drivers on the grid.

Despite being out of a job, and amid rumours he will join Williams next year, Sergio gave good cause to be retained by a team as he fought his way back to seventh place, his reputation as a master of races where attrition takes its toll was enhanced.

On the other hand, his teammate Lance Stroll endured his worst performance in F1 triggering the question: should he have been allowed to start the race considering he had COVID-19 a week ago? Was he fit enough after being tested positive a mere two Sundays ago.

Then, a mere ten days later he jets into Portimao supposedly healed, in the car a couple of days later whereafter his performances were grossly overshadowed by his teammate. In the race he tried a no-go move on Lando Norris that destroyed both their races.

The driver of the pink car penalised for his errant ways before Racing Point did the sensible thing and boxed Lance’s car for a DNF.

Although they were stuck in the heart fo the midfield all weekend Renault drivers Esteban Ocon and Daniel Ricciardo did well to avoid the tricky mid-pack to claim eighth and ninth respectively.

Final words from Lewis’  boss Toto Wolff: “Who would’ve thought when we started this project in 2013… it’s almost a surreal. It’s his absolute passion and energy and everything he puts into the sport – and the talent and the ability. He’s just standing out.

“This season he has ramped up his weekend. It’s a lot of learning, understanding the tyres and after the first couple of laps he was just sitting comfortably – then he just ramps it up even more,” added the World Champion. 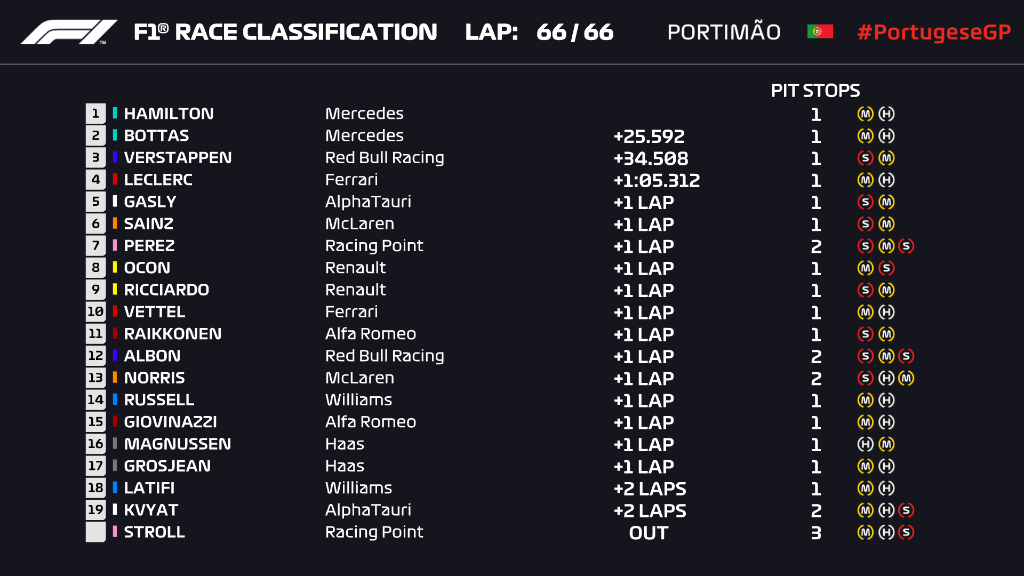 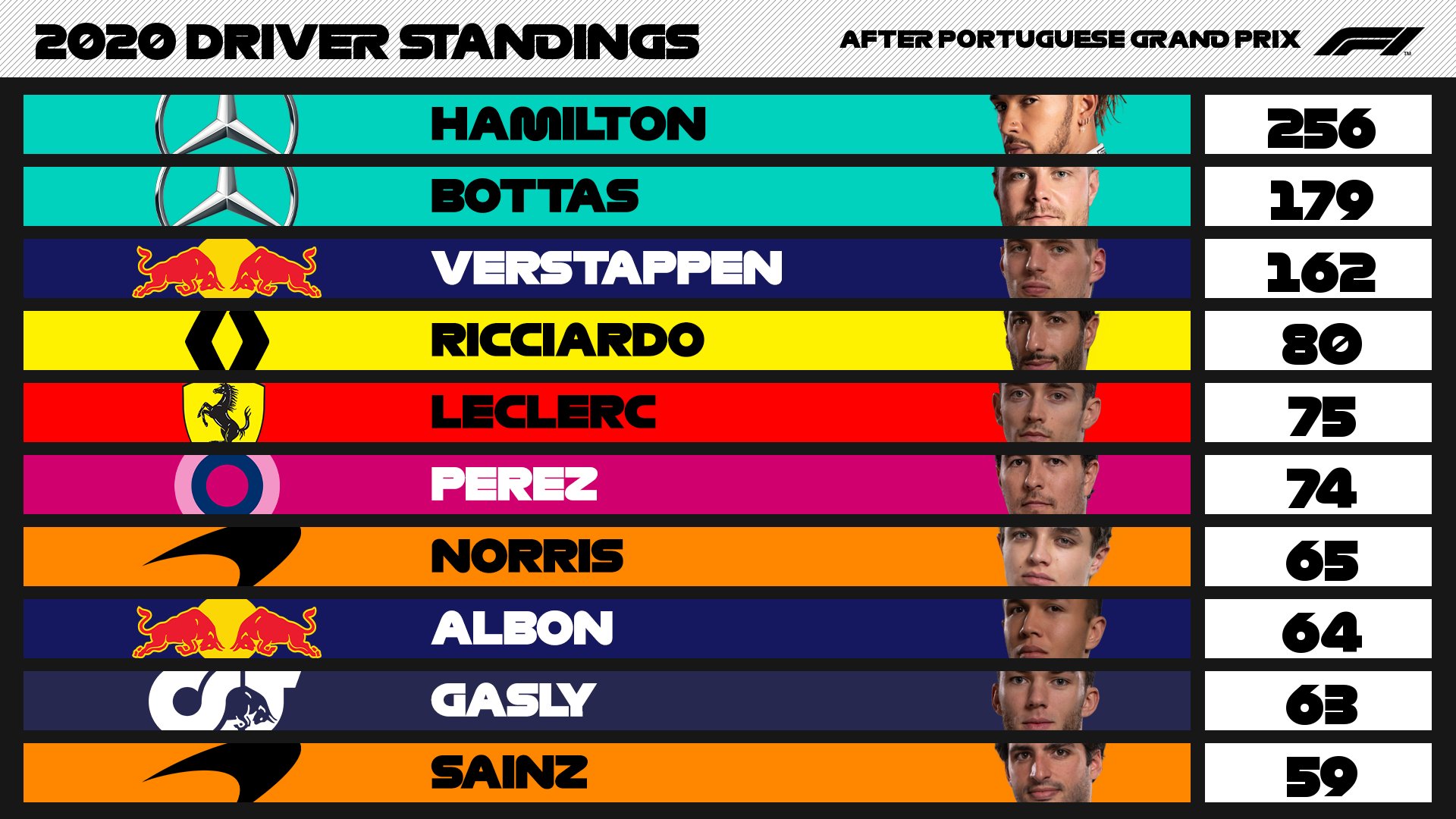 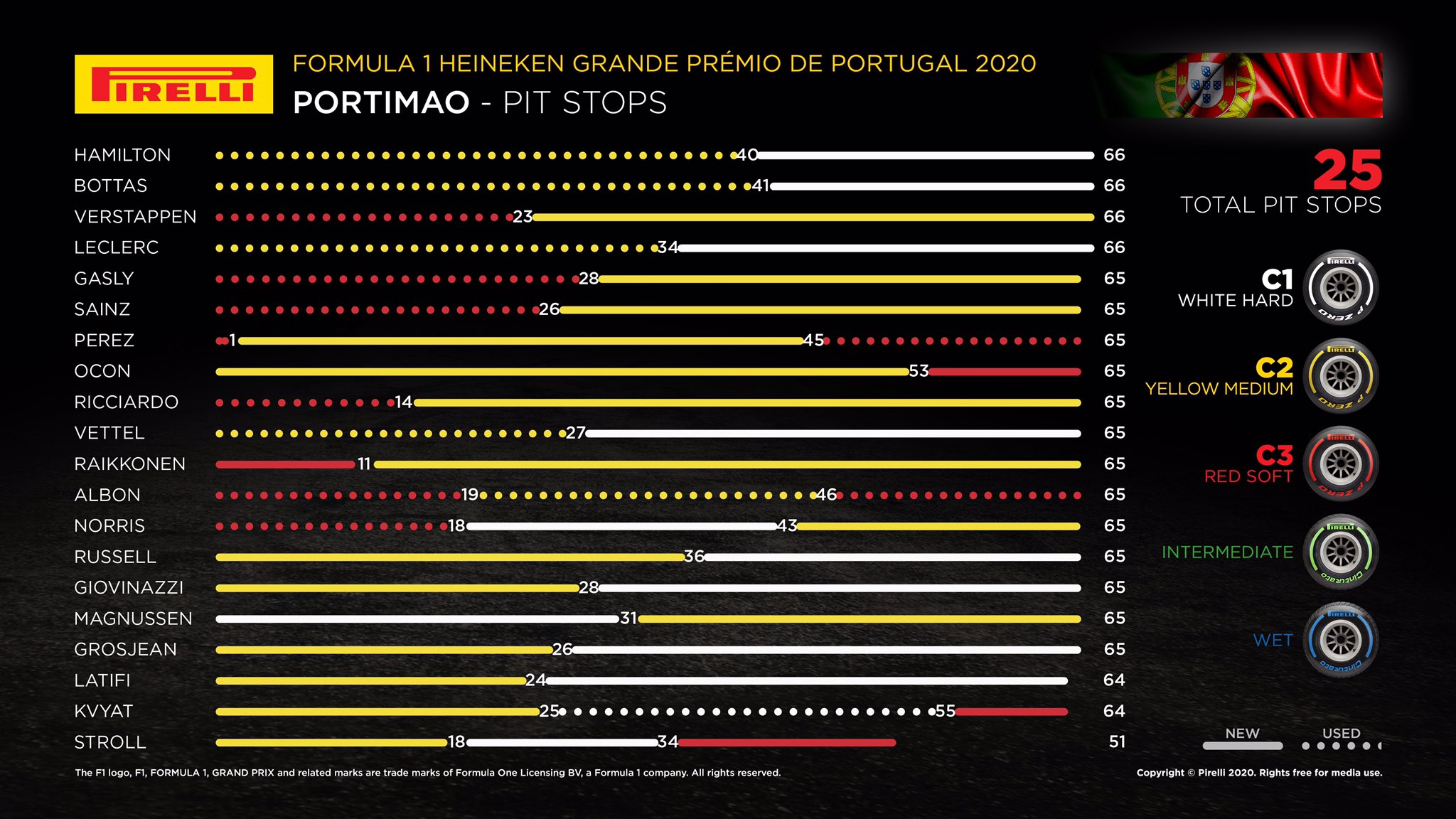 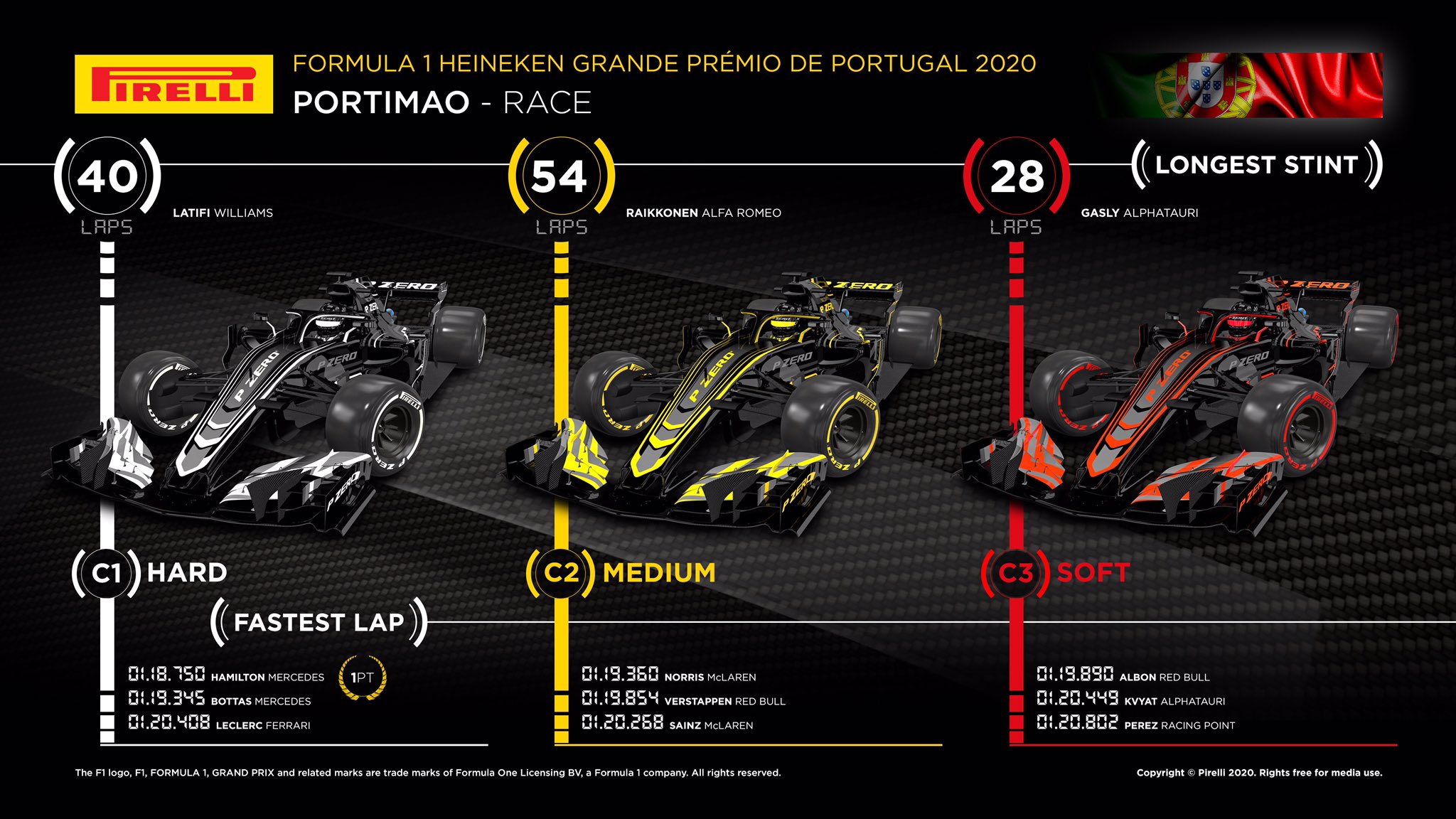