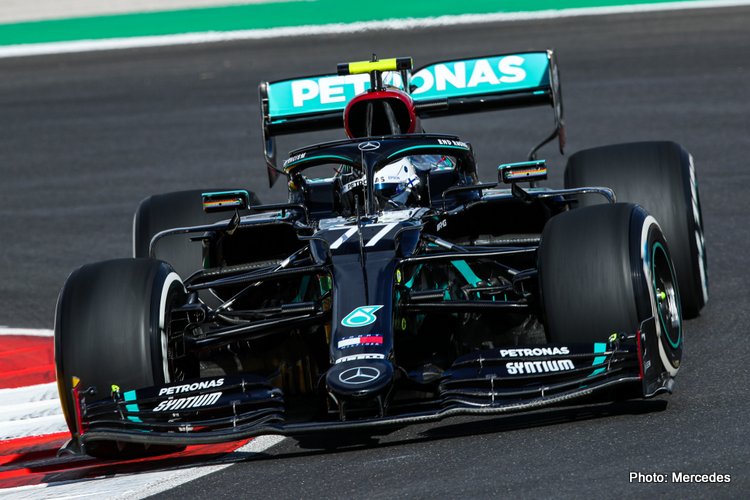 It might be a new track, but it was a very familiar story with Valtteri Bottas leading a Mercedes 1-2 in first practice for the Portuguese Grand Prix on Friday.

Topping the timesheets with a 1:18.140, Bottas was 0.339 seconds ahead of teammate Lewis Hamilton in an intriguing session to mark Formula 1’s return to Portimao.

Last at the Algarve circuit for a 2009 preseason test, F1’s cars have gotten considerably bigger and faster since then, with little time wasted before tearing into the lap record, although the circuit did its part to bite back.

Additionally, several cars displayed heavy graining to their front-left tyres in what will be a serious concern heading into the race, with the possibility that drivers will have to make two pit stops as a result.

Should that prove the case, it would certainly bode well for Red Bull’s Max Verstappen, who won amidst similar tyre difficulties at the 70th Anniversary GP at Silverstone, and finished P3 here despite setting his best time on hard tyres to the Mercs’ mediums.

Ferrari’s Charles Leclerc also showed some encouraging pace, managing to get within nine tenths of the lead on the hard tyre.

In P5 was Verstappen’s teammate Alexander Albon, 0.955s behind the lead, and 0.174s off the Dutchman.

Carlos Sainz managed sixth in a solid early showing for McLaren, his best time 0.466s ahead of midfield rival Sergio Perez in P7.

Kimi Raikkonen was P8 for Alfa Romeo, 0.104s ahead of Renault’s Daniel Ricciardo in ninth, with AlphaTauri’s Pierre Gasly rounding-out the top ten a further 0.066s back.

Coming into the weekend desperately seeking some form, Sebastian Vettel evidently still has work to do having finished P11, his best effort 0.891s behind Ferrari teammate Leclerc.

Well over two seconds off the lead, Kevin Magussen was the best of the ‘Formula 1.75’ runners in 14th, with Lance Stroll, who returned to his car after missing the Eifel GP with COVID-19, 0.108s behind.

Anontio Giovinazzi was 16th ahead of the soon-to-be departing Romain Grosjean and George Russell in 17th and 18th respectively.

Esteban Ocon had a particularly difficult session, the Frenchman not just finishing second-last but enduring what appeared to be a gearbox failure as he made his way back to the pits at the end of the session.

Latifi, who had the aforementioned spin early in the session, brought up the rear, his best effort an unimpressive 3.644 seconds off the lead. 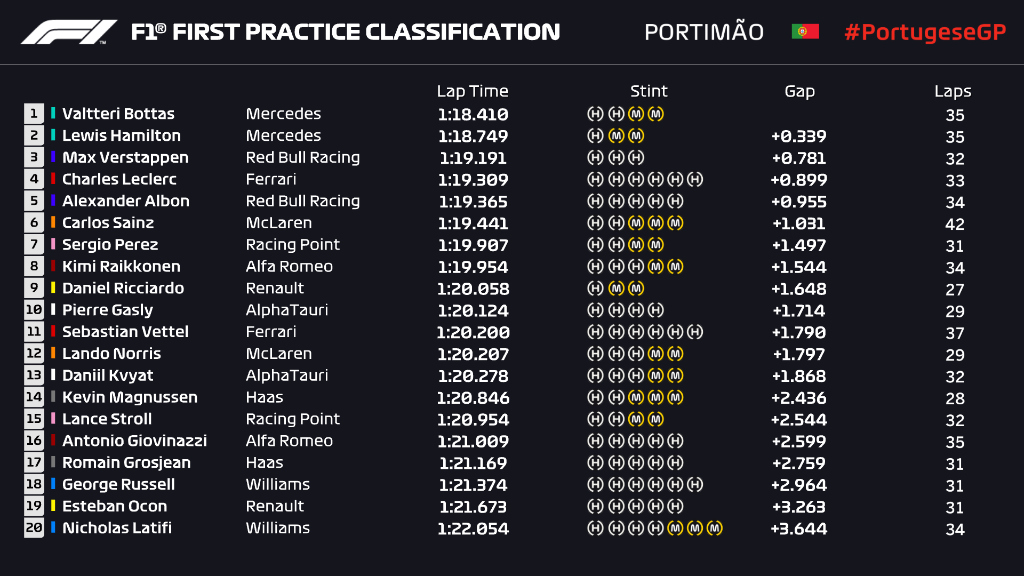