Hamilton: That’s bullshit! Where is that in the rule book? 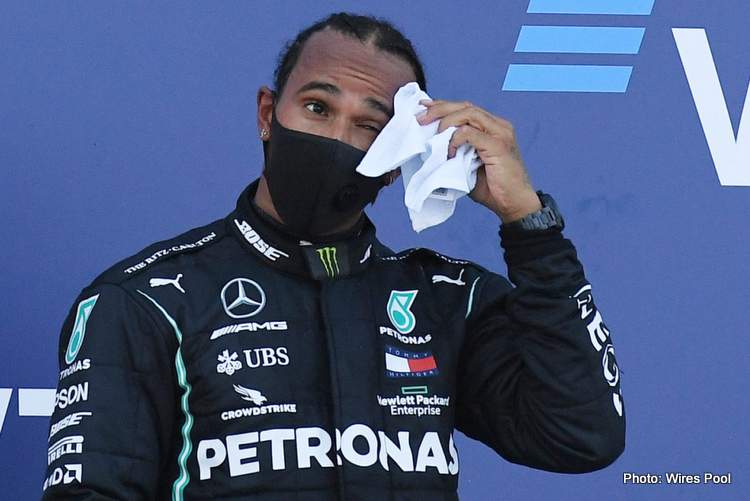 A fuming Lewis Hamilton has accused Formula 1 bosses of being out to get him after a 10-second penalty denied the Mercedes driver a record-equalling victory at the 2020 Russian Grand Prix.

Hamilton was penalised by the stewards for performing two illegal practice starts here in Sochi ahead of a race in which he had hoped to claim his 91st victory to match Michael Schumacher’s all-time tally.

But the penalty dropped him out of contention, with the six-time world champion blasting the decision as “bullshit”.

With Hamilton out of the way, Valtteri Bottas marched to a regulation victory, crossing the line 7.7 seconds clear of Red Bull’s Max Verstappen. Hamilton finished a distant third.

Hamilton will also have to toe a disciplinary tightrope after he was dealt two additional points on his licence, taking his 12-month tally to 10.

If he receives two more at any stage during the next four grands prix, he will be hit with a one-race ban, which could derail what had seemed an inevitable march towards his seventh title.

“I’m pretty sure no-one has ever got two five-second penalties for something so ridiculous before,” Hamilton said after the race.

“I didn’t put anyone in danger, I’ve done this at a million tracks over the years and never been questioned. But it is to be expected. They are trying to stop me.

“Whenever a team is at the front, you face scrutiny. Everything on our car is checked, double-checked, triple checked.

“They are also changing rules such as the engine modes [believed to have favoured Mercedes in qualifying] so there are lots of things they are putting in the way to keep the racing exciting. It feels like we are fighting uphill.”

After roaring to pole position at the Sochi Autodrom, Hamilton headed into Sunday’s race as the favourite to rewrite the sport’s record books.

A look back at the time penalties incurred by polesitter Lewis Hamilton before lights out – which ended up changing the complexion of the Russian Grand Prix#RussianGP 🇷🇺 #F1 pic.twitter.com/3EZ43De2UB

But his hopes went up in smoke just moments after he left his garage when he dialled the Mercedes pit wall to see where he could perform a practice start.

“Can I go out further (of the pits) or not?” Hamilton asked. “A-firm,” replied his race engineer, Pete Bonnington.

“To the end of the pit wall?” asked the world champion. “Yes copy,” came the reply.

But Bonnington’s call was a breach of the rules, and Hamilton was under investigation before the race had even begun.

Despite holding off Bottas at the getaway and again at the restart – after the safety car was deployed following two separate crashes involving McLaren’s Carlos Sainz and Racing Point’s Lance Stroll on the opening lap – Hamilton was hit with two five-second penalties.

“That is bullshit,” the Briton said when informed of the punishment. “Where is that in the rulebook?”

Article 36.1 of the sporting regulations require drivers “to use constant throttle and constant speed in the pit exit,” and the stewards deemed that Hamilton broke the rule by “performing his practice start near the end, but directly in the pit exit”.

Hamilton served his penalty when he came in for new rubber on lap 16. Sitting, shaking his head, he was on the radio again, “This is just ridiculous.”

The 35-year-old dropped to 11th, 36 seconds behind Bottas, and his maiden shot at matching Schumacher’s record was over in a flash.

Reflecting on the infringement after the race, Hamilton added: “The rule says you have to be on the right side of the track after the pit-lane lights, but it doesn’t say how far.

“I don’t like to be on the same place where everybody has completed their practice starts because it is not representative of what it is like on the grid so I try to get on a surface that doesn’t have any tyre rubber laid down.

“I asked the team and as far as we were aware it was OK. So, yes, an interesting decision to be penalised.”

Perhaps tellingly, Hamilton’s boss Toto Wolff ruled out an appeal, but said: “I am not happy with the penalty – it is far-fetched.”

Hamilton will now have to navigate the rounds in Nurburgring, Imola, Portimao and Istanbul without any further penalties to avoid a ban.

“It is ridiculous the points they have been giving this year. Penalty points are for putting someone else in danger or crashing into somebody, but I did not harm anyone. Going forward, I will make sure I don’t give them an excuse for anything,” added the World Champion. (Additional Reporting: GP247)