Mugello FP2: Mercedes out in front, Max close, Ferrari not 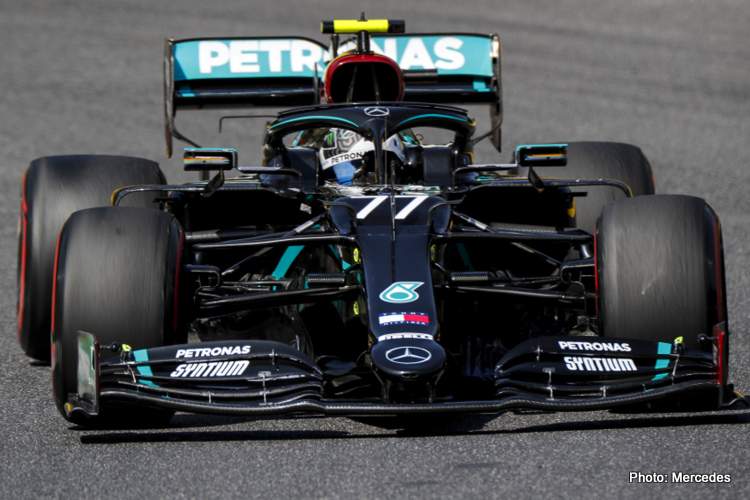 Autodromo Internazionale del Mugello may be the newest venue on the Formula 1 schedule, but it was business as usual at the top of the timing screens with Valtteri Bottas a tad faster than teammate Lewis Hamilton.

On the flipside, Ferrari celebrating their 1000th race this weekend were woefully off the pace with Charles Leclerc 10th and Sebastian Vettel, a tenth slower, in 12th; the pair over 1.4 seconds off the top time suggesting another weekend of pain, exacerbated by the grand occasion at which the hosts will have a minor role.

Adding to the pressure on the home team was the fact that Vettel parked his car without any power late on in the 90-minute session.

It was an incident-packed session with Sergio Perez and Kimi Raikkonen tangling, and Lando Norris crashing his McLaren. In an incident that will be reviewed by stewards in the presence of the Racing Point driver who was summoned to face the officials.

Perez tagged the Alfa Romeo as they targeted the same piece of tarmac, spinning Raikkonen’s Alfa Romeo into the gravel.

Norris overdid it into Turn 3 and the unforgiving nature of old-school tracks like Imola with no real run-off, resulted in a serious impact, the driver reporting as the dust settled on his McLaren, “I’ve crashed. I’m good.”

At the sharp end, Bottas owned day one after topping the times in the morning session. In FP2 he was the only one to dip under the 77 seconds mark with a 1:16.989, with Hamilton a couple of tenths shy in the second Black Arrow.

Red Bull’s Max Verstappen was next best in third, his time a quarter of a second off the top time in his Red Bull, the Dutchman again way ahead of the rest, best of which was teammate Alex Albon in fourth, albeit nearly a second down on the top time and three-quarters of a second slower than his teammate in the #33 car.

Over a second off the benchmark were the Renault pair, with Daniel Esteban fifth fastest, just under a tenth up on teammate Esteban Ocon.

Perez emerged from the shenanigans with the seventh-best time, a couple of tenths up on his teammate Lance Stroll in 11th.

Raikkonen was ninth at the end of the day, with his Alfa Romeo teammate Antonio Giovinazzi almost half a second shy of his veteran teammate. in 17th.

A massive two seconds off the pace and entrenching themselves as the permanent backmarkers were the Haas duo. Kevin Magnussen was 19th, while Romain Grosjean only did five laps as an engine issue compromised his running. 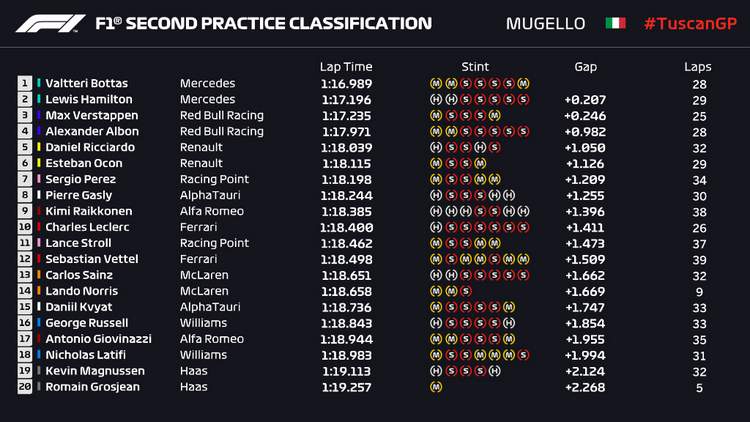