Ferrari: We were unable to optimise the car performance 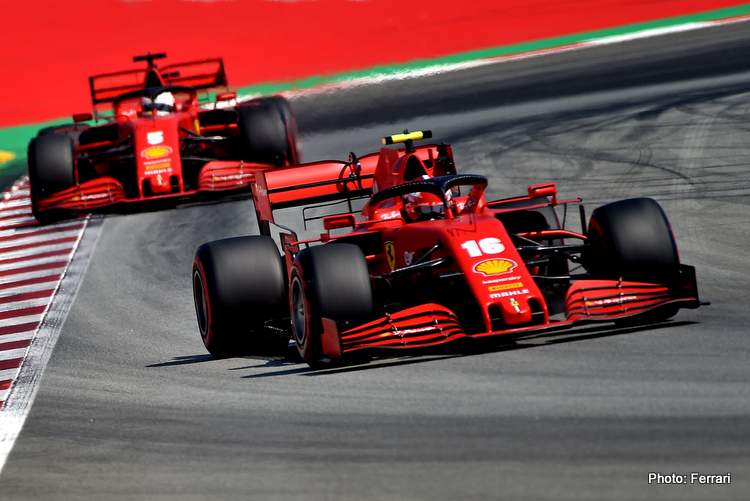 Tifosi are warned! Ferrari are expecting a tough 2020 Spanish Grand Prix on Sunday, both their drivers starting from the heart of a very close and frantic midfield grid, with a car that is seriously lacking on all fronts.

It took a mighty effort for Charles Leclerc to wrestle the SF1000 to ninth place, albeit 1.5 seconds off the top time set by Mercedes driver Lewis Hamilton.

It is hard to recall a Ferrari team so far out of contention and with little respite on the horizon for the most popular team in the sport.

Sporting director Laurent Mekies stated the obvious in ht team’s qualifying report, “It will be a difficult race tomorrow with high temperatures giving the drivers, cars and tyres a hard time.

“In fact, tyre management will be one of the key factors, with several strategy options available. It will be up to us to make the best of it. In the last two races, we managed it and we’d like to do the same again tomorrow.

“It was a difficult qualifying, with Charles’ ninth place and Sebastian’s eleventh pretty similar to last week’s performance. We were unable to optimise the car performance as the track evolved and we paid a high price for that with our grid positions.

“If you look at by how little Sebastian missed the cut to Q3 and then Charles’ performance in the final part, it’s clear that a very small improvement would have delivered a better result. Having said that, we have to work out why the car balance was far from ideal this afternoon.”

Indeed two-thousandth of a second is a whisker for Vettel to miss out on Q3, but Tifosi would be within their rights to ask: what are their team doing there in the first place?

Seb said afterwards, “Two-thousandths of a second is a very small gap. I tried everything and for sure it is a shame to be that close and not get through.

“I’ve been struggling all weekend to find the right balance. However, we have to look at the positives and with a free choice of tyres for tomorrow, hopefully we can do something different. We have tonight to think about that.”

Leclerc is more comfortable in the car, and consequently was a couple of tenths faster than the German when the flag waved to end Q2.

The Monegasque summarised his Saturday afternoon, I am disappointed with our quali result. I was not very happy with the car today.

“At the beginning of quali it was not too bad but then I had a lot of understeer, which was getting worse and worse after every session and I just could not drive around this issue. We need to look into it and understand how we can fix it, because in the end P9 is disappointing. We were just not fast enough on our quick lap.

“Tomorrow we will be starting on Softs, which is not the best tyre here, and people behind us will start on Medium and Hard, probably the best strategy, so it won’t be easy,” added Leclerc.