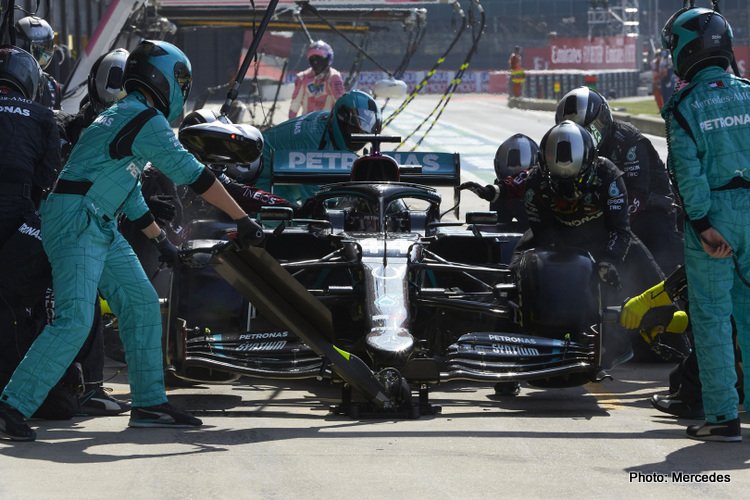 Formula 1 races with multiple pitstops per driver should be the norm, not the exception, says Mercedes’ Lewis Hamilton.

An often controversial topic in F1 circles, tyre-supplier Pirelli has in recent years opted for the conservative choice when it comes to tyre selection, leading to a plethora of one-stop races.

However with two grands prix in succession at Silverstone, Pirelli went with softer, less durable compounds in the second leg, and saw the decision pay-off with a race that saw all cars stop at least twice, and a surprise victor in Red Bull’s Max Verstappen.

Despite being on the receiving end of that upset, Hamilton suggested Pirelli’s choice was worthwhile for what it did to improve the spectacle.

“We’ve come here with the softer tyres which, I think, has made the race even more exciting as we set about a two stop.” Hamilton said in the post-race press conference.

“Part of me doesn’t want to propose that we go with softer tyres moving forwards because maybe we’ll be in this position again, but ultimately, one-stop sucks.

“We should never be doing one-stops, I think in this sport.

“It’s never been good watching as a fan. It makes it more exciting when there’s more.”

Starting on the hard tyres, Verstappen was able to make an ambitious strategy work with a 26-lap stint to open the race, followed by a quick six-lap run on the mediums before another 20-lap stint on hards to the flag.

In contrast, Hamilton and Mercedes teammate Valtteri Bottas both started on mediums from their front-row grid slots and stopped twice for hards, but suffered severe graining throughout the afternoon as the team’s four-race unbeaten streak to open the season came to an end.

Winner of five of the past six driver’s championships, Hamilton went on to say he hoped for a further challenge from Red Bull.

“I want to have races where they’re challenging like today so I’m excited to watch this race.

“Obviously the Red Bull seems to be quite close in race conditions to us and obviously today is stronger so it shows they don’t have as bad a package as perhaps people had said in the past but I think it’s good.

“It will be interesting to see the progression through the rest of the year and I definitely will not overlook them.

“I think we’ve got to keep a close eye on them and keep working to push forwards because I don’t think it’s going to be easy by any means. But I don’t think my team has that mentality anyway so we just keep our heads down.

“I was hopeful today that maybe we would have that – wishful thinking, but hoping to have some sort of race towards the end, but maybe in the future we will get to have some, a bit more.”