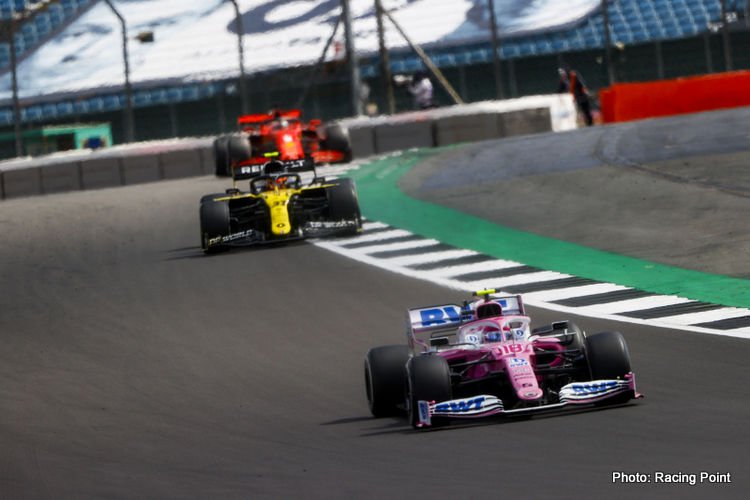 UPDATE: Williams and Racing Point have also launched their own respective protests, the original article is as follows.

Ferrari, McLaren, and Renault are intending to protest the FIA’s verdict after finding Racing Point guilty of copying a listed part, it emerged on Friday.

Receiving a 15-point deduction and €400,000 fine for using the same brake ducts on its RP20 as Mercedes had on their 2019 W10, Racing Point can still run the part for the rest of the season as the FIA has deemed it impractical to force the team into a re-design given their already-acquired knowledge.

Reportedly the three teams – all in a close midfield battle with Racing Point – are upset about both the punishment and the allowance for them to keep doing it, and have thus stated their intention to appeal.

Speaking on the case, Ferrari boss Mattia Binotto explained that an appeal was also important to get further clarification on the practice of copying competitor’s cars in general.

“One thing that is important is that it has been clarified that there has been a breach of regulation. I think that is the starting point,” he said.

“Obviously that is relative to the braking ducts but there is an entire concept behind, which is about copying: are we allowed to copy or not, an entire concept? But the two things need to be split.

“On the braking duct there is a breach of regulation, that is a fact and it has been clarified. Is the penalty sufficient or not? Again, I think we need to go through carefully the 14 pages.”

Any team that wishes to take such a measure has 24 hours to state their intention to appeal from when the verdict was revealed, with the three teams already announced now having an additional 96 hours to confirm they want the case in front of the FIA’s International Court of Appeal.

On the other side, Mercedes boss Toto Wolff hit-out at the appealing teams for what he perceives as jealousy of Racing Point’s performance.

“I know the case inside and out. We were surprised in a way,” he told Sky Sports. “There is a strong belief from everyone involved that it was perfectly within the regulations.

“The tricky bit is that in 2019 those parts were non-listed parts and [this year] became listed parts.

“What I see is there is a group forming – a little revolution in every sense – and they are trying to go after Racing Point I guess because they haven’t got the performance Racing Point has.”

“In 2019, those parts were not listed. And became listed in the following year. There was no concrete regulation or technical directive that said ‘you aren’t allowed to use 2019 parts that you have gotten and then re-designed yourself, to whatever point in 2020. It simply doesn’t say that.

“All the other teams seem to think they didn’t design them themselves, which they did. I mean there’s a thousand drawings around, and they’ve re-engineered them.

“It comes to the point where we have an interpretation of a regulation that doesn’t exist.

“What benefit should Mercedes have by stepping even one inch over the line and supplying them any parts that are listed? We wouldn’t do that. It’s some things that people make up in their minds because they are supposedly angry with themselves.”