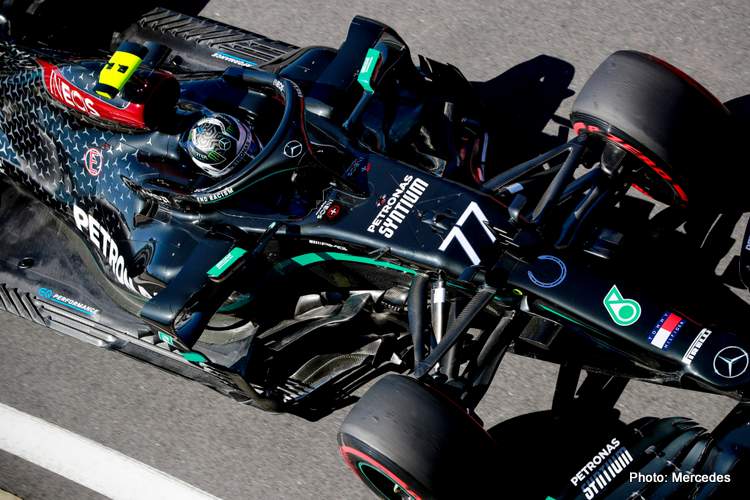 Valtteri Bottas managed to put an end to the three-race pole position streak of teammate Lewis Hamilton with a last-minute charge at Silverstone on Saturday.

Beating Hamilton by 0.063 seconds, Bottas time of 1:25.154 gave him his first pole since the season-opening Austrian Grand Prix five weeks ago, and puts him in the best possible position to narrow his deficit in the driver’s standings to the Briton on Sunday.

The 13th pole position of his career, Bottas was understandably pleased with his accomplishment.

“It feels good,” he said afterwards. “I just love qualifying and especially when it goes well it’s a good feeling. Nice to get everything out of myself and out of the car.

“Set-up wise we made good steps from last weekend – that’s why I think the qualifying performance was better than last weekend – so really pleased with that.

“Proud to drive this amazing car – it’s so quick.

“Mentally when you start on pole you can only aim to win the race, I need a good start from the line and then go from there.”

Conversely, Hamilton did not try to hide his disappointment over failing to improve on his final lap, but praised his teammate’s effort.

“I wasn’t that great! But Valtteri did a good job and deserved the pole I guess. For me, it wasn’t a perfect last lap.”

Immediately behind the Mercedes pairing was Racing Point stand-in Nico Hulkenberg, who managed one of the best qualifying efforts of his career despite having just over a week in the car.

“A crazy seven or eight days! Obviously last week, with the big high to come back and the low on Sunday [not starting the race], it was very extreme. This weekend I felt much better in the car, much more prepared.

“Q3 was just head down, full beans, whatever I had – and a bit surprised to stand here. But obviously a big smile on my face and a lot of respect for the race tomorrow.”

Just under a tenth behind was Max Verstappen, the Red Bull driver, in turn, beating out old teammate Daniel Ricciardo by a similar margin.

Lance Stroll was sixth in the second Racing Point, 0.346s adrift from his temporary teammate.

AlphaTauri’s Pierre Gasly impressed once again at Silverstone finishing P7, his junior-Red Bull 0.080s ahead of the first Ferrari of Charles Leclerc.

Alexander Albon managed to get back in Q3 for the first time in three races, albeit finishing almost half-a-second down teammate Verstappen in ninth, with Lando Norris completing the top-ten.

Narrowly missing the cut in Q2 was Renault’s Esteban Ocon, Sebastian Vettel right behind him in what is turning into another frustrating weekend for the German.

Carlos Sainz was 13th, ahead of Haas’ Romain Grosjean, the latter putting in a mighty Q1 lap to make the second session.

Williams’ George Russell was P15, making it the fourth-straight race in which he has reached Q2.

Daniil Kvyat was unlucky number 16 in Q1, ahead of the Haas of Kevin Magnussen and the Williams of Nicholas Latifi.

The Alfa Romeos of Antonio Giovinazzi and Kimi Raikkonen completed the grid in 19th and 20th respectively, their car once again lacking significant pace on a Saturday. 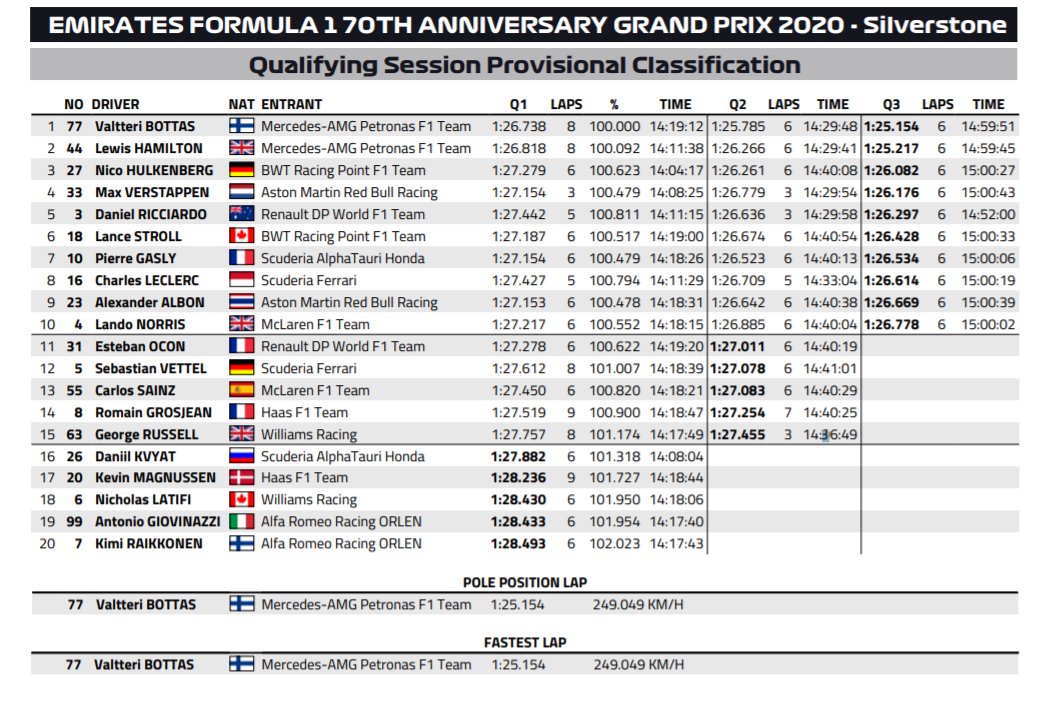