In the Pitlane: Zak Brown, deal-maker 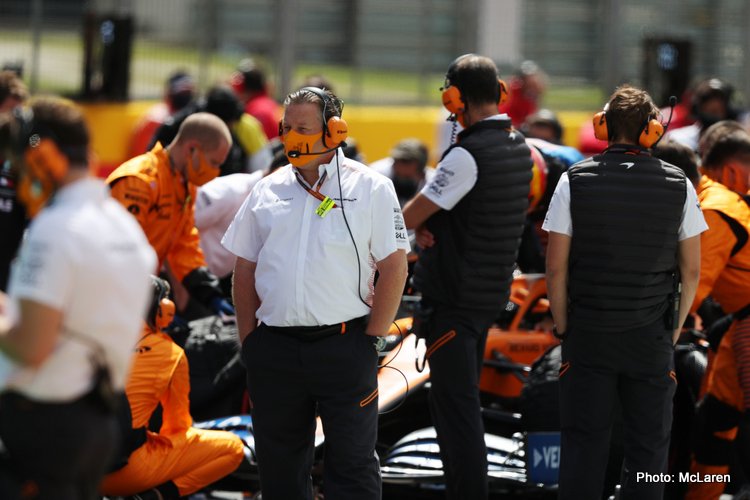 In the week McLaren announced Gulf Oil as a new sponsor the team also came in for criticism for its deal with British American Tobacco and their “a better tomorrow” campaign.

Well, with the deal being worth an estimated $40m it is not surprising McLaren has decided to pocket the money.

McLaren has a unique approach to sponsorship; their strategy is to sign multiple sponsors and have no title sponsor.

Having a title sponsor may work for the big beasts of Mercedes and Ferrari but recently it has not served the smaller teams well.

Williams parted company with ROKiT back in May leaving existing sponsor Michael Latifi to make up the shortfall by increasing his company’s sponsorship no doubt to place him in an advantageous position during on-going negotiations about purchasing the team.

Haas had the disastrous involvement with Rich Energy and its deluded owner William Storey. Incidentally, Storey popped up last week announcing on Twitter that he was heading up a consortium to buy Sunderland football club!

In the absence of a title sponsor for the 2020 season, Gene Haas has become in effect his own sponsor with his machine tool company Haas Automation filling the void.

McLaren’s shift of focus is down to Zak Brown Executive Officer of McLaren Racing who joined the team when McLaren had been without a title sponsor in 2015 and 2016 losing the team an estimated £40m in revenue?

The background was McLaren losing its ground-breaking $650m sponsorship from Vodafone in 2013 after an act of commercial suicide when the team refused Vodafone’s request to remove their logos during the Bahrain GP in 2012.

The team blatantly antagonized its title sponsor because a major shareholder was the Bahrain royal family’s Mumtalalkat investment fund. If McLaren had agreed, then effectively the team were agreeing to a boycott of a race by a sponsor which would give legitimacy to concerns over human rights criticism of Bahrain.

Then whisky brand Johnnie Walker, a sponsor since 2005, offered to take over as title sponsor at the end of 2013, but their offer of $55m was turned down by then-McLaren chairman Ron Dennis, who believed it to be “too small.”

So, when Zak Brown was appointed in November 2016 he announced, “We don’t want a title sponsor, but let me clarify what that means – we do want a principal partner, which is title-level branding,”

“Unlike in NASCAR where the title sponsor of a team gets a lot of mentions, I don’t think many people refer to Mercedes as Petronas Mercedes – they call it Mercedes. You never hear it from commentators, it is never written that way. So, I want to keep the name McLaren, so not every three to five years it is West McLaren, it is Vodafone McLaren, it is Marlboro McLaren. We are McLaren.”

The policy has evolved with the principle partner option replaced with multiple partners.

In a nutshell, yes.

Zak Brown has used his extensive contacts book built up during his 20-year ownership of the world’s largest motorsport marketing agency Just Marketing International to implement his strategy.

McLaren has forty-five sponsors covering a wide and diverse range of companies and sectors.

A classic case of not having all your eggs in the one basket.

A good example is at the end of last year when Brazilian oil company Petrobras terminated their sponsorship due to a cost-cutting drive by the Brazilian government, McLaren has been able to replace the “oil” sector sponsorship with the Gulf Oil deal.

McLaren like everyone else in the paddock and the wider world has been impacted financially by the pandemic.

The team needed to secure extra funding to help it through the crisis and in June a loan was arranged from Bahrain’s National Bank.

Brown is upbeat about the team’s sponsorship prospects and insists that more deals will be done telling reporters before the Silverstone race, “I think we’re in quite a good position now. The bad news is behind us, as far as it relates to all the stuff that played out the last couple of months. We’re financially healthy.”

“We’ve just announced Gulf Oil and we have a couple of announcements coming up, so we’re now exactly where we want to be.”

“I think post-COVID, not that we’re in a post-COVID era yet, but looking forward I think we’re sitting on a better business model for F1 and for McLaren for the next journey of F1.”

“We’re in quite a good spot, and spirits are high.”

So, McLaren continues to make progress on and off the track.

On a footnote: now we all must stay safe maybe it is time for the return of a sponsor from the past: condom manufacturer Durex!