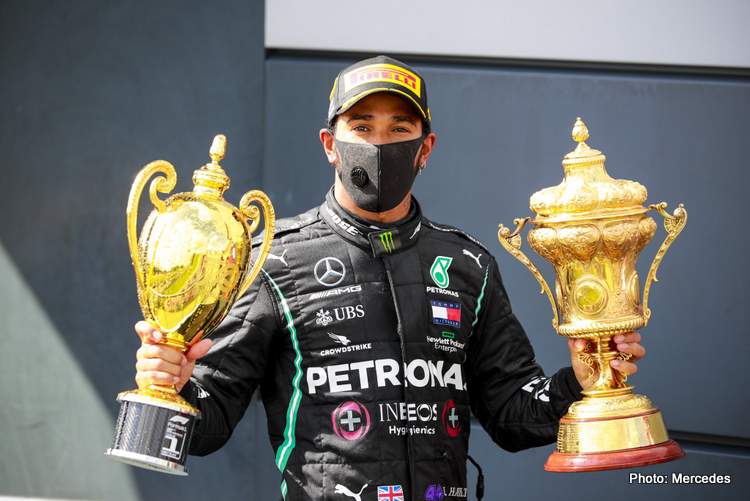 The six-time world champion won his third race in a row having taken his 91st pole position on Saturday in qualifying, finishing ahead of Max Verstappen in second and third-placed Charles Leclerc.

Hamilton’s teammate Valtteri Bottas missed out on a second-place finish after dropping back following a tyre blowout of his own, while Carlos Sainz also faced tyre issues.

Brilliant in qualifying on his final runs but loses a point for his spin in Q2 which brought out a red flag. Dominated the race from the from despite a slightly slow getaway and was incredibly calm to bring the car home on the final lap with just three working tyres.

Excellent as we have come to expect throughout the weekend, but the decision to pit him late on perhaps cost him an unexpected victory.

Out-drove his teammate Sebastian Vettel all weekend and definitely maximised the car’s potential in both qualifying and race trim. Has done very well to secure two podiums already this season.

Has been low key excellent all season and this was another fantastic performance. Ricciardo was forceful early on with the faster McLarens before taking advantage late on when Sainz slowed down with tyre issues.

On top of Sainz in qualifying once again but got caught out early on and fell behind his teammate. Lost out on a fourth place to Ricciardo in the closing laps and perhaps could have done more to get past Sainz when he started to slow.

Definitely his best performance since returning to Formula 1. Still not quite on Ricciardo’s level, but made some nice moves and looked really on the pace.

Another brilliant showing from Gasly, who passed a Ferrari on merit when he got past Vettel. Stayed patient in the early stages and got the moves done when the chances arose.

A torrid weekend for Albon who went out in Q2 and crashed in FP2. He then collided with Kevin Magnussen early on and was playing catch up, although he admittedly did well to get back up to eighth.

After a really good showing in Hungary, this was more like the Stroll we have become used to. Maybe he struggled without Perez as a benchmark, but nonetheless did maximise the potential of the RP20.

He was pretty far off his teammate all weekend and will be disappointed to finish 10th behind some slower cars. Things do not look right between him and the team and it would be no surprise to hear there was an issue with his Ferrari.

Much better race pace for the Finn this week as he managed to keep Hamilton honest for much of Sunday, but he will have been disappointed to be three tenths of in qualifying. Really unlucky to have a tyre blowout late on that leaves the gap between him and his teammate at 30 points.

Best race showing so far after making another Q2 appearance, although a grid penalty saw him start further back. Seems the Williams may have made a step forward with their upgrade.

Tyre blowout aside this was a decent showing from Sainz, who got ahead of his teammate at the start. However, he never pushed on from there and suffered as a result.

Undoubtedly has speed but it just unable to avoid the regular errors. Another time penalty cost him a shot at the points and saw him drop behind Russell.

Better in the race than previously but remains a way off Russell. Spun in qualifying too which is becoming too regular a habit.

Cannot blame him for taking the strategy gamble, but it simply did not pay off. His defence was entertaining if not a little aggressive at times, but it was good to see him fighting hard.

A disastrous race for the veteran who cannot be enjoying himself right now given the performance of Alfa Romeo. Lost a front wing end-plate, which could be the reason for the tyre issues seen late on.

Beaten by Gasly in qualifying once again before suffering a nasty looking crash. Second looking suggests it was not his fault and it was good to see he came to no harm.

Sent into the gravel on the opening lap by Alex Albon in a move the Dane described as “poorly judged”. Beat Grosjean in qualifying but will have been hoping for more after such a good run in Hungary.

Desperately unlucky to do be able to start the race, the German deserves credit for getting up to speed so quickly. Not far off Stroll in Q2, despite having never driven this car before. I would expect him to go better next week.