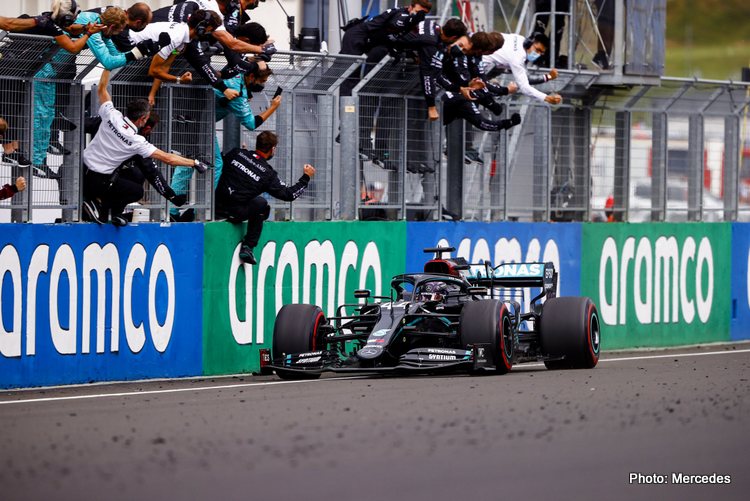 Early drama for his two closest rivals meant Lewis Hamilton was completely untroubled on his way to victory in the Hungarian Grand Prix on Sunday.

A margin of victory that was only flattered by a late pitstop in a push for fastest lap, Hamilton still finished 8.702 seconds ahead of second-placed Max Verstappen in what was an imperious performance from the six-time Formula 1 world champion.

Leading almost the entire race from pole, Hamilton faced no resistance throughout the afternoon. Verstappen, who was lucky to start the race after crashing under greasy conditions on his way to the grid, never had the pace in his Red Bull to keep up, while third-placed Valtteri Bottas was in a fight just to catch the Dutchman after jumping the start from his P2 grid-slot.

Speaking afterwards, Hamilton declared it “one of my favourite races to have raced.”

“Whilst I was on my own, it was a different kind of challenge. Of course we had great pace, and it could be without everyone back at the factory,” he said. “Round One had multiple different punches that I wasn’t perhaps ready for but I refocused and the last two have been fantastic. This weekend, we’ve just been on point throughout so we need to try and keep this up.”

Verstappen indicated he was pleased with the result given his early difficulties.

“It was not how I wanted in the beginning of course, ending up in the barriers, a bit of a lack of grip – but the mechanics did an amazing job to fix the car. I don’t know how they did it, incredible. Everything was working as normal.

“To pay them back with the second place, I’m very pleased with that.

“I thought I was not going to race, so to be second is like a victory for me!”

Conversely, Bottas could not hide his disappointment.

“It was a pretty bad race from me to be honest. Starting second, obviously we aim to win the race. But I lost it from the start, I reacted to a light on my dash that went off. I don’t know what it was.

“I lost many places and it made the race pretty difficult for me.”

As to the rest of the field, there was certainly a significant gulf in pace. Fourth-placed Lance Stroll finished 47.377s behind Bottas, meaning Racing Point are forced to wait at least another two weeks for their first podium with the ‘Pink Mercedes’.

Verstappen’s teammate Alexander Albon was the only other driver to finish on the same lap as Hamilton, albeit 78.316s off the lead.

Ferrari’s Sebastian Vettel was sixth in a performance that while not exactly encouraging for his team, would have been satisfying for him personally with the gap to teammate Charles Leclerc in 11th.

Sergio Perez suffered a horrid start, dropping back from the P4 he earned in qualifying to P7 at the flag, only 0.950s ahead of Renault’s Daniel Ricciardo.

Kevin Magnussen made the most of a bold call to start from the pit lane on dry tyres to come home in ninth, giving Haas its first points of the 2020 F1 season.

McLaren’s Carlos Sainz rounded-out the top ten, his battle with future-teammate Leclerc one of the highlights of the day.

Behind Leclerc, Daniil Kvyat was 12th for AlphaTauri, narrowly leading the McLaren of Lando Norris by 0.739s. Esteban Ocon was a further 0.876s back in his Renault.

Romain Grosjean was 15th, ahead of the Alfa Romeo pairing of Kimi Raikkonen and Antonio Giovinazzi, who in turn can take some solace in the fact they leapfrogged both Williams drivers despite a dismal Saturday performance.

Showing a complete lack of race pace, George Russell went from 12th at the start to 18th at the flag, while teammate Nicholas Latifi seemingly was barely able to keep his car on track in finishing 5 laps down.

Pierre Gasly was last as the only retirement of the race, the engine problems that have plagued his weekend once again rearing their head after just 14 laps. 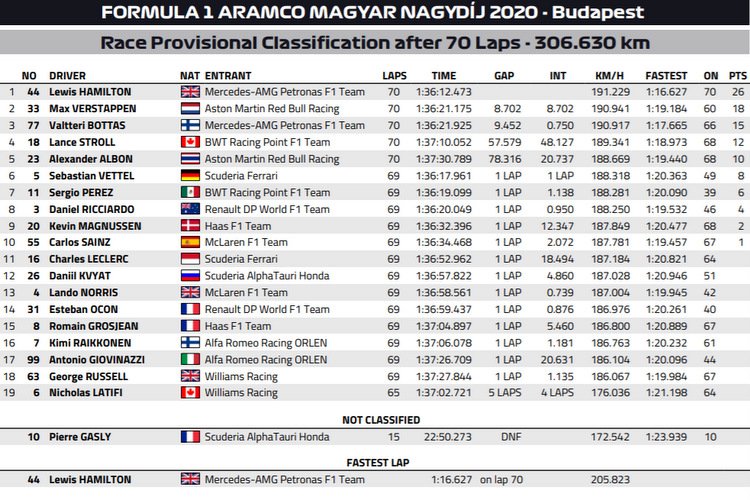 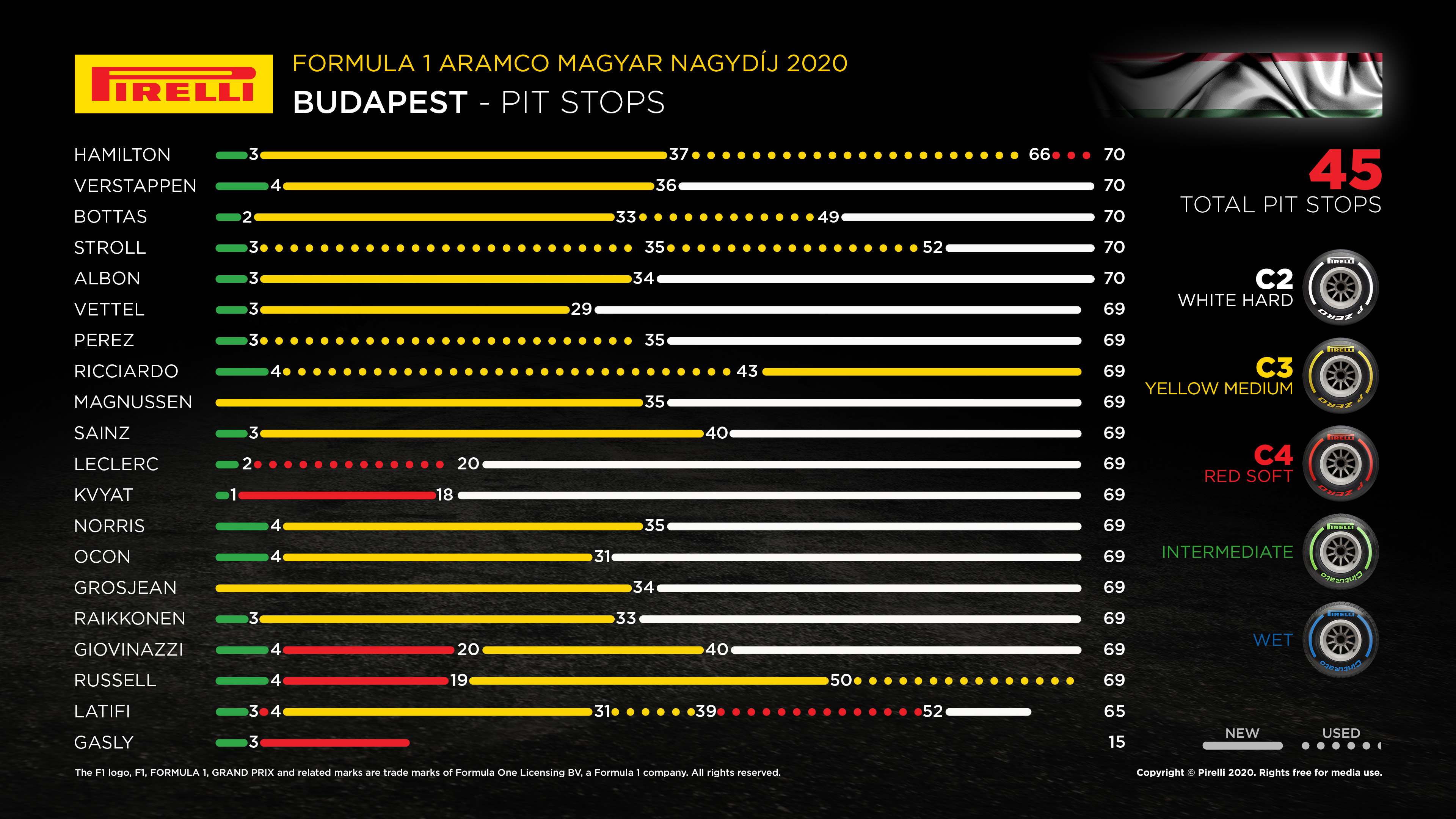 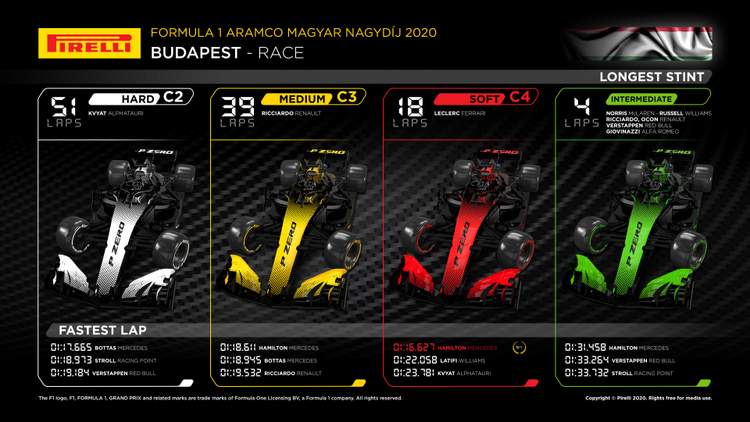