F1 in South Africa: It took a while to get racing post-War 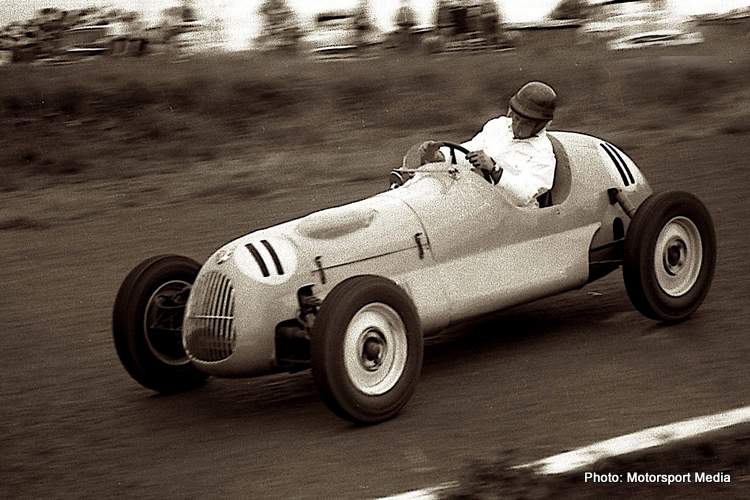 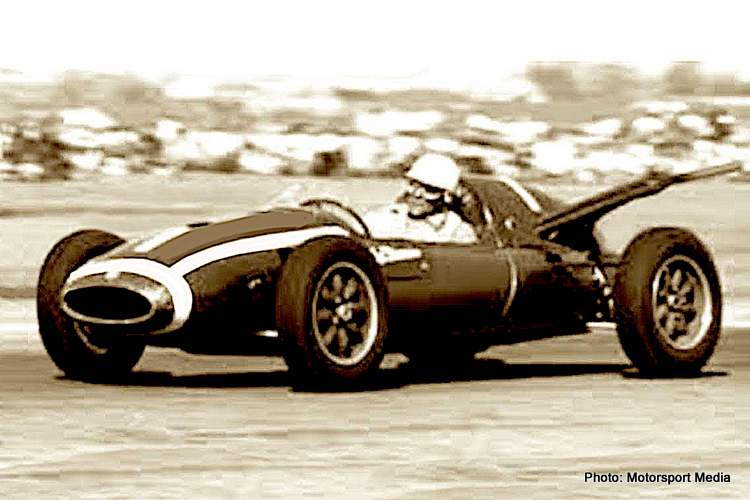 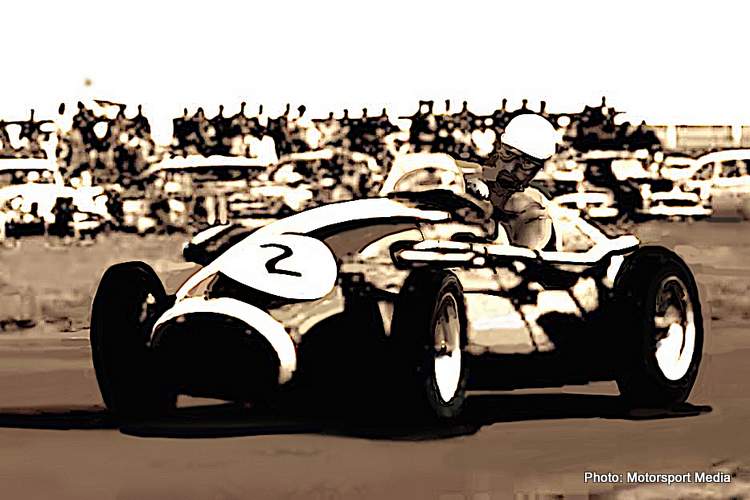 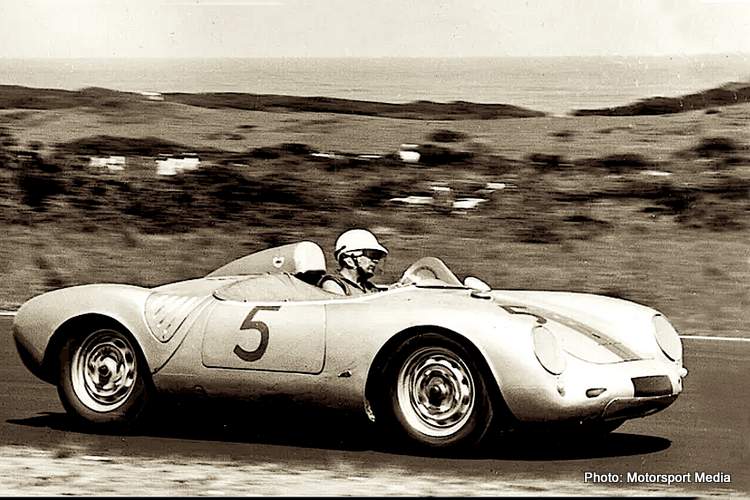 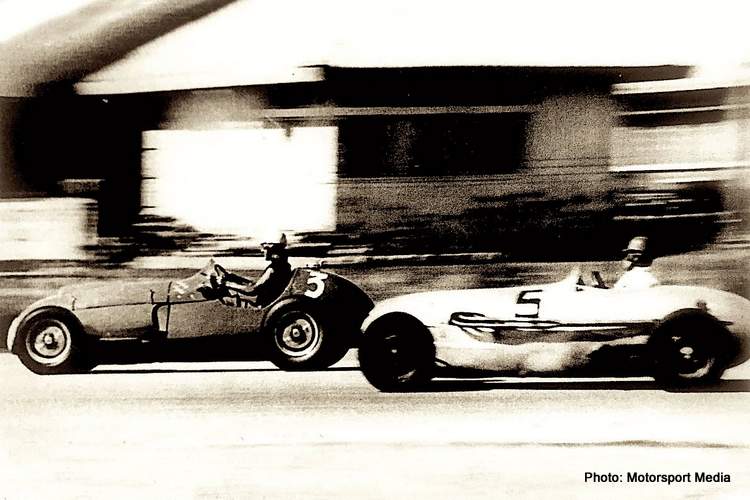 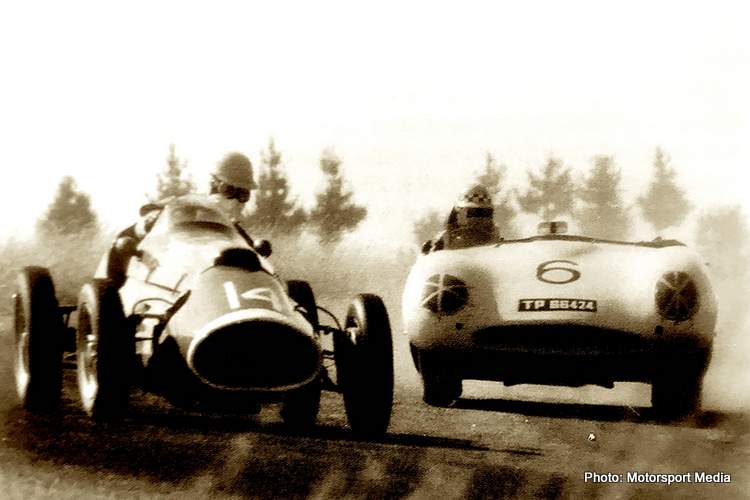 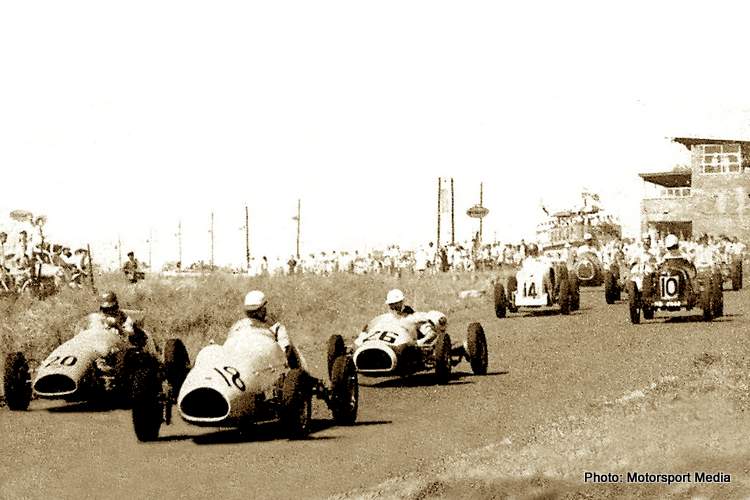 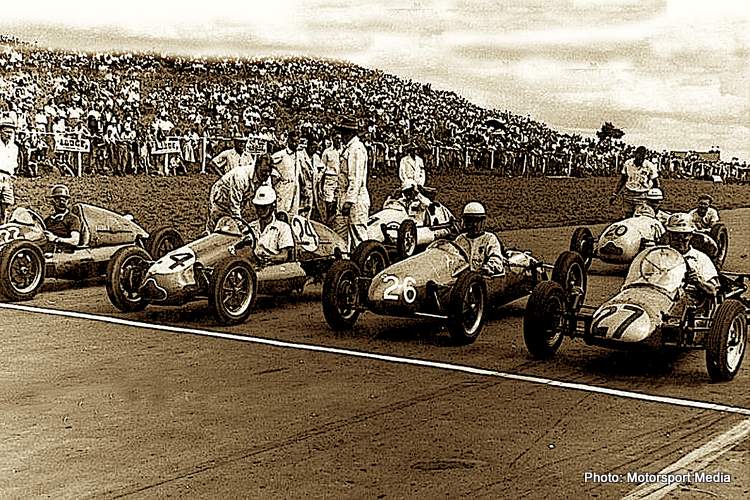 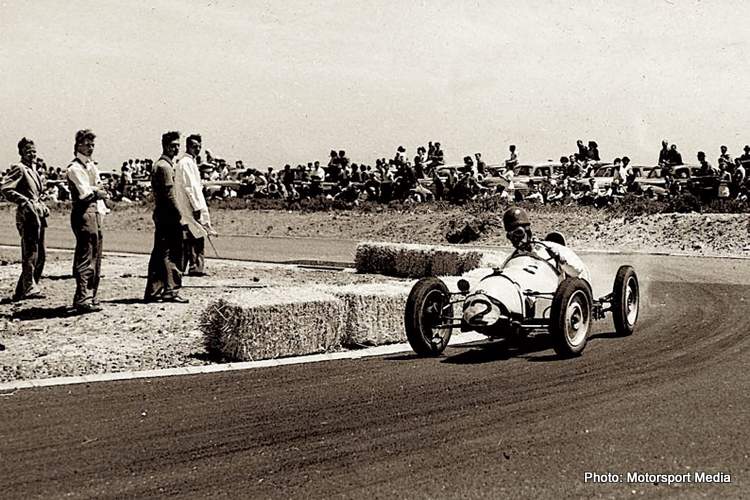 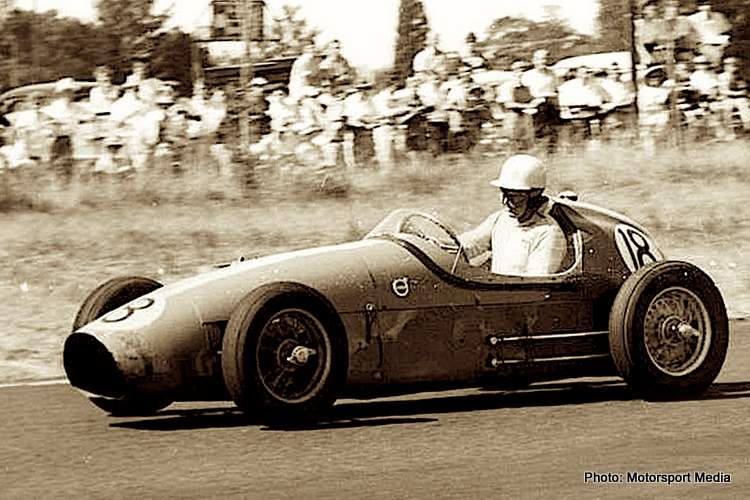 While hostilities had not directly affected the subcontinent in a physical sense, World War 2’s allied economical ravages indeed had a profound effect. It would take more than three years before real car racing returned in South Africa.

Times really were tough – just about everything was in short supply and there was quite simply no growth in the immediate aftermath. Life first needed to return to normal, so motor clubs’ wan to reorganise the sport took a back seat. Never mind most pre-war racetracks no longer existed, so new circuits had to be found or built.

Still, enthusiasm was great following those the chaotic war years, even if early events were limited to hillclimbs, speed trails and gymkhanas. Racers made do with machinery that had been parked since pre-war races or they built Specials out of old Austin’s, MGs and American cars.

The Sports Car Club was established in 1946 and by mid 1947, East London organisers were once again dreaming up a South African Grand Prix on the Prince George circuit. It was however the Natal Motorcycle and Car Club that made the breakthrough as it persuaded local authorities to host a real motor race on the Durban beachfront in early ‘48.

That race would spark a splendid new era of South African racing as while most racers hardly the budget to fire their contraptions, they were charged by the sheer burning enthusiasm to just race. Lured by passion and the run-what-you-brung spirit of a lack of technical rules, locals began building some incredible cars that would race for a generation to come. The local sport was finally back on the up.

The 4 January 1948 Pat Fairfield Trophy drew a startling entry and attracted a huge holiday crowd in spite of a rainy day. They cheered a dominant Basil Beall on to overcome treacherous conditions and emerge victorious in his glorious ERA ahead of Dennis Cockerell’s Austin Special, Eddie Hall’s Bentley, the Ray Millbank Alfa Romeo, Les Miller in a MG P-type and Max Miller’s trusty Ford V8 Special.

Beall and his ERA went on to make it a Fairfield Trophy double in 1949, while the Banana Boys led the way forward in South African motorsport with two new Natal racetracks while the rest of the country looked on. The April ‘49 Coronation 100 at Pietermaritzburg attracted an even bigger crowd to behold the spectacle of 47 men and their magnificent racing machines take to the Alexander Park racetrack.

That race attracted everything from a Bugatti 35C to an ERA and a Lagonda, Bentleys and even a rapid Fiat special mixing it up with a horde of local Austins, MGs and the like, as Pierre Kelfkens’ Klip Bugatti-Ford Special came out on top.

The Vaalies were, however, having none of that and not to be outdone, a race was run on a new road course at the Germiston Airfield late in 1948. A local racer, Frank Brodie, who had raced briefly before the war, won at the wheel of a Brooklands Riley.

There was more big news up in Johannesburg on the opening of the brand new Sports Car Club-run Grand Central circuit in January 1950, when George Cannell drove his fearsome supercharged ex-Nuvolari ‘34 Maserati 6C-34 to win the Rand Open Trophy as Capetonian Pat Brown’s Cisaprilia-Lancia Special won on handicap.

Miller had been sniffing around to build a special and happened across a TC chassis at his Durban local MG dealership and snapped it up. It took a year to fettle his creation, but it was soon in race winning form.

Also itching to get back on the racing map, the Cape Town racing fraternity set up a track on roads laid for the new Gunners Circle industrial park. An inaugural meeting in 1951 showed the Circle off to be a challenging blend of rough and bumpy high speed straights and tricky, slow sections as an army of Austins, MGs and Rileys battled le Roux’s LRX Mercury and Frewen’s Hudson Specials.

The 100 proved dramatic as Hilton Gray had a lucky escape when he rolled his Mike Appel Fiat Special at Tombstone Corner following a titanic battle with Frank Brodie’s MG Special, while Stanley Reed emerged victorious aboard in his eponymous Reed Citroen Special. A few weeks later, Les Miller took his new Spider-MG to its first victory in the East London Winter Handicap.

Brodie’s new MG Special was another of a new breed of unique South African special race cars – after finding his Riley too cumbersome, he bought and stripped a two year old MG TC, lightened the chassis, fitted modern brakes and a Scintilla magneto; a Studebaker clutch and valves and ended up with a wieldy lightweight race winner.

South Africans were meanwhile looking to race overseas and by 1952, Gordon Henderson was one of the men headed to the UK. He tested but missed out racing Tony Gaze’s former ’34 SA Grand Prix winning Maserati 8CM on a trip that formed associations that would later most positively influence motor racing in South Arica.

Local racing took a significant step forward when a formal calendar was announced for the 1953 season, with points to be awarded at each race to crown the first South African Drivers Champion at the end of the year. Dougie Duff fired his campaign off to a fine start when he won the Coronation 100 at Pietermaritzburg’s Alexandra Park in his Riley TT ahead of Arthur Mackenzie’s newfangled Cooper-JAP.

Although it was very much a junior category racer, that purpose-built motorcycle-engined Cooper raised eyebrows as it mixed it with the local Specials. Its speed and pace had frowns on the regular drivers’ foreheads and the midnight oil burning as they plotted to resist this new phenomenon…

Not that there was no life left in the Specials – Jennings had acquired a Riley engine from Edgar Hoal and built a spaceframe chassis to fit the engine along with a variety of lightweight Austin and Fiat components. He shrouded it all in bare aluminium bodywork and the ingenious little car was starting to prove a significant factor.

Dougie Duff however did enough to be crowned the first South African Driver’s Champion for 1953 and earned a minted Gold Star for his effort.

The next race saw Peter Woolridge took his Austin Special to Pietermaritzburg Coronation 100 victory at Alexandra Park from Dennis Cockerell’s similar machine and Harry Pierce’s Jasper MG Special. A dozen old school Austin Seven Specials started that race along with a few new Formula Juniors, including one for a promising young debutant by the name of Syd van der Vyver.

Next race was the Salisbury Grand Prix up north in Rhodesia at Belvedere in June, where Stanley Reed drove his Citroen Special to win, while back down south, Les Miller’s Spider-MG took Settlers Trophy honours on Durban’s Snell Parade.

Reed was back to his winning ways in the Citroen Special in the East London’s Winter Trophy on the Esplanade track, but it was not enough to prevent Bill Jennings from claiming a Gold Star as he was crowned 1954 South African Driver’s Champion.

1955 commenced with reigning South African Champion Bill Jennings kicking his title defence off to a cracking start as he drove his Riley Special to win the False Bay 100 at Gunner’s Circle, as ever on New Year’s Day.

The Cape was clearly staking its claim as the new capital of local motor racing as the First van Riebeeck Trophy finally attracted a cracking international entry to race on a new track on the Eesterivier airfield, barely two months later.

Gaze duly took revenge, stealing the show as he raced his Ferrari to victory in the Queenshaven Races 1820 Settlers Trophy at the new Palmietfontein circuit near Alberton, while up north, CWM Kirkpatrick won Sailsbury’s Marlborough Trophy in his MG Special.

All Frank Brodie’s hard work on improving his MG Special soon paid off with a fine Coronation 100 victory in Pietermaritzburg, before he went on to earn a Gold Star as he clinched the 1955 SA Driver’s title with another win in the November Grand Central Centenary Trophy.

Miller then retired from racing as champion, while Les Miller earned a unique Silver Star to celebrate his three years in a row as runner up in the South African Drivers Chqampionship.

Bill Jennings once again started his 1956 season in style with a second Gunner’s Circle False Bay 100 win in two years in the face of some interesting new machinery in the championship.

Like Frank Brodie, Bill had quietly fettled his lovely little 545kg Jennings Riley Special to develop double the power he had started off with and his latest custom branch exhaust had found a handy wedge of extra grunt too.

The nimble homebuilt 1500cc 4-cylinder Special shocked Jimmy de Villiers when he passed the potent new straight-six Formula 1 Cooper-Bristol around the outside of a 160km/h bend to take the lead. Tony Fergusson ended third in his Cooper-Norton ahead of early leader Gordon Lindsay’s in another F1 Cooper Bristol.

Britons Mike Young and Bill Holt’s Connaughts then joined the grid for the first of a series of international races starting with the Cape Grand Prix at Gunners Circle, where Gordon Phillips welcomed the visitors in typical South African style with a giant-killing win in his MG Special.

Peter Whitehead them joined the fray to win the rejuvenated Rand Grand Prix at Palmietfontein aboard Tony Gaze’s Ferrari 500, before the three overseas entries raced in April’s Pietermaritzburg Coronation 100 at Roy Hesketh.

The circus then travelled up to Sailsbury, where Whitehead won both the Kafue Handicap and Limpopo Trophy at Marlborough from Sam Tingle’s R Type MG and Tony Fergusson’s Cooper-Norton. Still in Salisbury a month later, John McPhee took his to ERA to Machonaland 100 victory at the Belvedere racetrack.

Bill Jennings then drove his Riley Special to win the East London Winter Trophy on the Esplanade circuit from Fergusson, Les Miller in Fatman and Harry Peirce’s Spider and Don Philp’s MG Special in a race that sadly claimed the life of Allan Shiers when he crashed the ex-Brodie MG Special.

Jennings’ Border win earned him another Gold Star as he wrapped up his second South African Drivers Championship as he scored 44 points over Fergusson’s 24 and Gordon Phillips’ 23.

Several South Africans also raced overseas with some success in 1956. Fred Campbell won the BRSCC Commander Yorke Trophy Formula Junior finale at Silverstone in a Pretty Norton in September, while 34 year old Tony Fergusson finished 3rd to Jim Russell and Stuart Lewis Eva in the British Grand Prix Formula Junior race among a few other useful placings through that cut and thrust season.

Change was however looming on news of lightweight rear-mid-engined Formula 1 race cars set to race in Europe, of which machinery would duly soon trickle down to now thriving racetracks on the Southern Tip of Africa. Come back next week to read how that all developed…