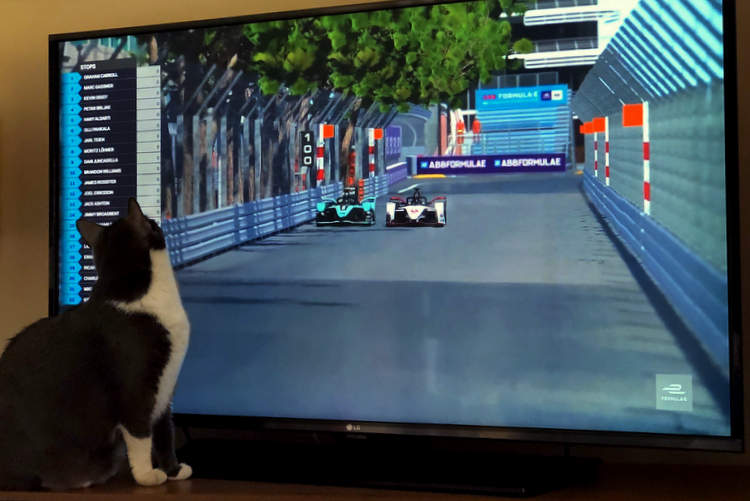 The regular Formula E drivers had their own race, with gamers and others competing separately in another, on simulators from their homes.

Andre Lotterer’s dog made a brief appearance in the background when the camera turned to Porsche’s third-place finisher.

Mercedes driver Stoffel Vandoorne finished as runner-up, seven-tenths behind, on a street circuit where overtaking is always tricky in real life.

The start was also typically chaotic and the race littered with the sort of pile-ups that would have brought out red flags in the real world, rather than a digital reset without the involvement of marshals.

Under the ‘race royale’ format, the last placed driver after each lap was eliminated until only 10 remained for a final sprint to the line.

Saturday’s race was non-points scoring for the virtual series with the emphasis on familiarisation for drivers joining the fray from as far afield as Felipe Massa in Brazil.

Formula E is following other championships, such as Formula One and MotoGP, in using virtual racing to fill the void left by the COVID-19 pandemic which has brought motorsport to a standstill.

The gamers race was won by Graham Carroll for the Envision Virgin team.

The ultimate prize at stake for those competing in that category is real-life track time in a Formula E car when real-life racing resumes.

Non-stop action! Your highlights from the test round of the ABB Formula E Race At Home Challenge In Support Of @UNICEF #RaceAtHome #ABBFormulaE https://t.co/9KqVKEr3qA pic.twitter.com/yhXRIJ5eE9