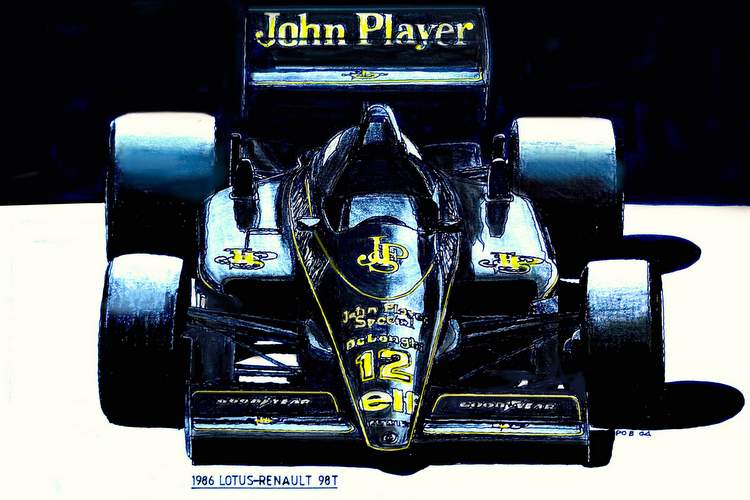 Michele Lupini and Patrick O’Brien dissect the Lotus 98T, the last of the John Player Special liveried cars that began life in black and gold in the early seventies when sponsorship in Formula 1 really kicked off.

The 98T in Ayrton Senna’s hands was good enough for eight podiums but only two victories in a season in which the intense battle between Alain Prost (McLaren) and Nigel Mansell (Williams) which the former won by two points.

Senna was always in the mix at the wheel of the 98T, while teammate Johnny Dumfries was only a bit player within the Lotus team at the time. He was their gearbox tester, the team developing their own six-speed gearbox and running it in the number two car while Senna drove with the tried and tested five-speed gearbox.

Senna won the Spanish Grand Prix and the Detroit Grand Prix that year in a car that was the last of the ‘real’ Lotus F1 cars powered by Renault. The following year the, 99T was Honda powered.

Some say that had the Lotus 98T not been so brittle and its potent Renault turbo V6 so thirsty, Ayrton Senna would have been F1 World Champion as early as 1986.

Others contend that because Alain Prost was such a cunning competitor and Nelson Piquet’s and Nigel Mansell’s nimble Williams FW11B Honda V6s were so frugal, then perhaps Senna and the Lotus-Renault did not deserve the title. Either way, Senna proved mighty in the 98T and this its story.