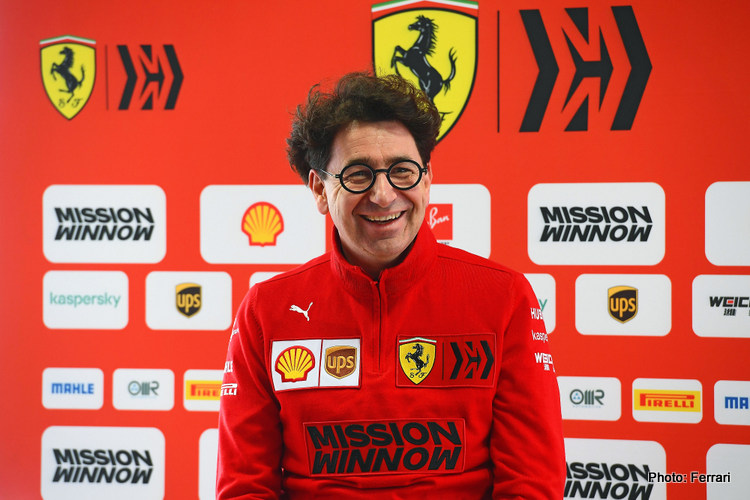 Within seconds of Formula 1 winter testing coming to a close Friday evening, the FIA revealed that, “after thorough technical investigations, it has concluded its analysis of the operation of the Scuderia Ferrari Formula 1 Power Unit and reached a settlement with the team.”

The statement went on: “The specifics of the agreement will remain between the parties — the FIA and Scuderia Ferrari have agreed to a number of technical commitments that will improve the monitoring of all Formula 1 Power Units for forthcoming championship seasons as well as assist the FIA in other regulatory duties in Formula 1 and in its research activities on carbon emissions and sustainable fuels.”

Shortly prior to the FIA revelation, Ferrari team boss Mattia Binotto was quoted admitting: “Our 2020 power unit is not as strong as it was last season — I think we’re fighting a combination of engine performance and the car having too much drag. We were focused on reliability and that is somehow compromising performance.

“We are not hiding — that is our true performance and it is difficult to admit what proportion is drag and what is power in public, but certainly we are down on speed compared to other competitors and that is affected by one way from the drag and the other from the reliability programme that we have in place.” Reliability programme? Well, OK!

The FIA revelations coupled to Binotto’s concerns spread like wildfire across the Italian media, where the country’s leading motorsport mouthpiece Autosprint pointed out, “Ferrari’s rivals were suspicions about the performance of the Prancing Horse’s SF90 engine and it was alleged that the team circumvented fuel flow meter regulations in a manner to allow Vettel and Leclerc’s single-seaters a power advantage for most of the 2019 season.

“It was an advantage that as you may remember, caused Verstappen to accuse, ‘They have stopped cheating’ following a drop in Ferrari’s performance after a FIA ​​directive before the USGP in Austin. In spite all the technical checks through 2019 however, no irregularities were found and no team ever filed an official complaint. Today, the FIA ​​and Ferrari put a stone on it.”

Leading Ferrari F1 analyst Leo Turrini was a little more damning on the root of the problem as he interpreted the situation.

“Friday’s FIA press release on the FIA-Ferrari dispute is objectively incomprehensible, or at least so for ordinary mortals,” Turrini pondered. “For the record, there were reservations about the performance of Ferrari’s power unit during the 2019 season and as the FIA does, it started an investigation as far as I know concerning the fuel flow meter and beyond.

“Ferrari argued that what it was doing was legal and it appears that the FIA has agreed to disagree and has given Ferrari the benefit of the doubt while closing whatever loophole Ferrari was exploiting. So has the FIA or Ferrari won or lost this game? Well, the technical solution has led to the revision of rules that also apply to Mercedes, Honda and Renault.

“So the FIA has merely equalised the rules instead of acknowledging an issue or disqualifying Ferrari, which clearly exploited a loophole in the regulations to achieve an advantage, which does imply good faith. The solution also remains private between the parties, but one has to ask who blew the whistle for want of a less Anglo-Saxon euphemism — who was the FIA’s mole?

“I am neither John le Carré, nor will I ever write as well, but I smell a rat and I don’t think I am wrong!”

So what have we here? Was Ferrari cheating? Who blew the whistle? And why did the FIA sweep this one under the carpet, rather than bang on a hundred million dollar fine, as it has been prone to in the past?

On Ferrari cheating, I ran a poll on my Auto & Sport Facebook group — a quite erudite bunch of racers and fans, whose collective opinion I trust wholeheartedly. The question was simple: Ferrari Cheats? And the answers even simpler: Yes or No. The response was a comprehensive 85% No.

Who blew the whistle? Follow the Italian media’s hint — it only alludes to one other party beyond Ferrari and the FIA in its quite intriguing interpretations.

And why did the FIA sweep it all under the carpet? It did not — it considered the situation at hand, looked at Ferrari’s case and obviously concluded that while Maranello was doing something odd; that the rules governing the situation were neither black or white enough to indeed rap the Scuderia on the knuckles. So it merely closed the loophole and has confirmed that the matter has been addressed, so we can all move on.

In closing may I leave you with this — when news of Mercedes’ Dual Axis Steering broke last week, consensus was initially that it was such a cheat, so illegal. Then the FIA said it was cool for 2020 and all of a sudden DAS was the next best thing in F1 genius after the wing, ground effects or the double diffuser. But DAS is also illegal next year.

So what’s the difference between DAS and the FIA-Ferrari fuel trick? Well, nothing really — both are just evidence of two brilliant teams best exploiting the rules at hand to do even better at the whole point of racing — to go faster than the rest and win.