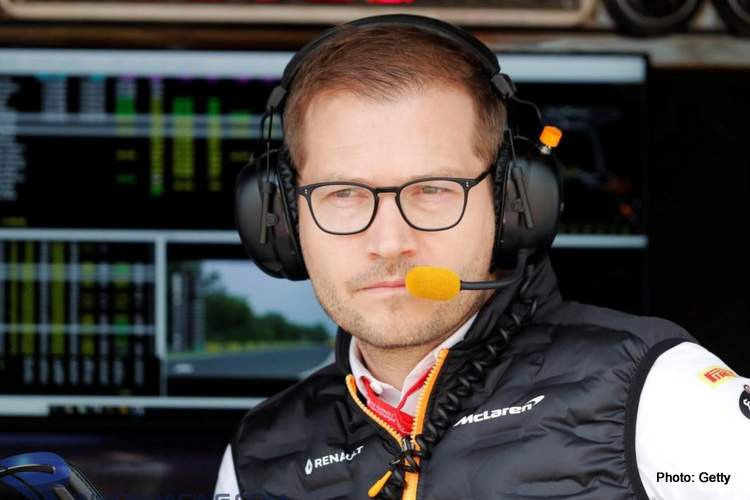 McLaren’s Andreas Seidl has revealed he is optimistic about McLaren’s chances of improving on their strong 2019 season, but doesn’t expect to be a winning outfit for a few more years yet.

Despite leading McLaren to their best constructor’s championship finish in seven years last season, the 44-year-old team principal reiterated they still have a long way to go to be title contenders.

“We still see enough weaknesses in the team that we have to work on. So we have to show that we are developing in these areas,” he told Auto Motor und Sport.

“A better infrastructure, better procedures, methods and processes, more efficiency, more self-confidence in their own performance, without letting it degenerate into arrogance,” he said.

“[In 2019] our gap to the top cars fluctuated between one and a half seconds. The top teams on every race track always deliver top performance under all conditions because they have cars that are less sensitive to certain conditions – for example, the characteristics of the track, temperatures and ground clearance. For us it was like many cars in the middle of the field. They have a configuration in which they work very well. If you fall out of this window, you are suddenly at the end of the midfield. We have to start there. More downforce is one thing, less sensitivity is the other. The downforce must be available across the full range of adjustments, in all dynamic states, in all curve types. There were too many fluctuations with us.”

Looking forwards, Seidl stressed it was important McLaren keep its focus on the immediate challenges of the 2020 season, rather than already start allocating resources to building its car for 2021 and the coming rules upheaval.

“We deliberately don’t do that,” said Seidl, in reference to Renault’s purported plan to split its focus.

“We have to keep up the positive run we have made this year. We also want to take a step forward in 2020. Not in terms of placement. I expect a hard fight for 4th place again. That is the maximum that is currently possible in Formula 1 given the current strength and budget. We still see enough weaknesses in the team that we have to work on. So we have to show that we are developing in these areas. And that is precisely why it is important to have a good 2020 season. It is clear to me that a balancing act awaits us in the current year, from when we switch the switch fully to 2021. Logically, this will happen earlier than usual.”

Whenever that switch does come, Seidl is not expecting to see immediate results in the first year of the new regulations, even though his team is already working under a similar budget cap to the one that will be mandatory.

“If we look towards budget capping, we are already on the right scale. The owners of the team made it clear to us that we can operate on the budget cover. This is a great signal for the team because we have the prerequisite to make the connection to the top. That won’t happen in 2021. The top teams still have more budgets, more resources, more people. And they do a better job too. They are likely to do that in 2020 in preparation for 2021. After the start of the new regulations, it will take time for the budget cap to take effect. I therefore expect to be on the podium and win in 2023.”