Vandoorne: Almost always they asked me to let Alonso pass 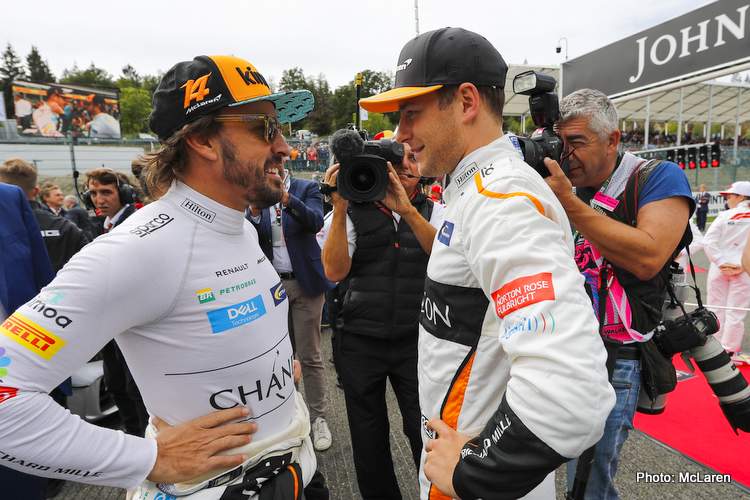 Stoffel Vandoorne looked set for Formula 1 stardom, but it was not to be as his timing was all wrong when he was signed by McLaren and was forced to play second fiddle to Fernando Alonso.

The 2015 GP2 Series champion made his Grand Prix debut with the Woking outfit in 2016 alongside Jenson Button, substituting for Fernando Alonso who was still recovering from his death-defying accident two weeks earlier at the season opener in Australia.

Vandoorne finished tenth, scoring points on his debut, but that was that for that year as Alonso returned and the team reserve was relegated to the sidelines.

Finally, in 2017  he got the call-up to be Alonso’s teammate as Button wisely retired from the top flight, some would argue a year or two too late.

Nevertheless, Vandoorne was a Formula 1 driver at last but things got worse, rather than better for him, according to the 27-year-old as it was clear that McLaren were focused on keeping their Spanish veteran happy even if it meant that happiness came at the expense of the rookie.

Vandoorne has been tight-lipped about his time as Alonso’s teammate although, earlier this year, he told pundit Marc Priestley, “I feel like McLaren chewed me up and spat me out.”

Now, in an interview with Sporza, Vandoorne has opened up more on what it was like to be the teammate of double F1 World Champion Alonso.

The Belgian said, “I never had any problems with him, but he always got what he wanted. There were always two, three well-placed people in the team who made sure everything went the way Fernando wanted it to go.

“He always got what he wanted. The team gave him all the support and power. Any driver would benefit from getting extra equipment to perform better than his teammate.

“On paper, I never finished in front of Alonso but of all the teammates I came closest, even just behind him. McLaren never told me not to finish in front of him but they asked me in races to let him pass. They almost always did that,” claimed Vandoorne.

After two seasons with the team, he was another McLaren reject, much like Kevin Magnussen and Sergio Perez were. The latter two managed to come back from their nightmares at Woking and resume their F1 careers despite the damaging spell they spent with the team.

Of course, Vandoorne was axed and after only two seasons he departed F1 and now is plying his trade with Mercedes in Formula E, where he appears to be much more content.

He explained, “In Formula E, Le Mans or the WEC endurance races you will find pure racing right now. You come here to race, not to do politics.

“Formula 1 remains the largest championship, Formula E is just below that, it’s one of the most competitive championships I have raced in. Many drivers have experience in Formula 1, others have a track record with which they could enter F1.

“It’s the future. That’s why you see more and more car manufacturers. F1 is a fake world in which everyone has to defend their own interests,” concluded Vandoorne who scored two podiums in his Formula E debut for Mercedes’ burgeoning electric racing project.